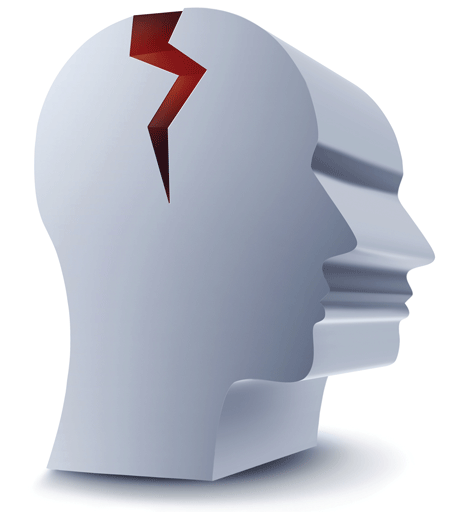 A Review of Basilar Skull Fractures

A 57-year-old intoxicated female presents after a fall from standing height. She denies any headache, vision changes, loss of consciousness, or neck pain, and takes no medications. Vital signs are unremarkable, but on exam she is noted to have left-sided hemotympanum with bloody otorrhea. A CT scan of the head and neck are reported as negative, but on further review of thin slices, a subtle oblique fracture of the left temporal bone is discovered, along with an associated small left temporoparietal subarachnoid hemorrhage (Figure 1; Figure 2). The patient is admitted to the intensive care unit where she develops self-limited vertigo but is later discharged home in stable condition. 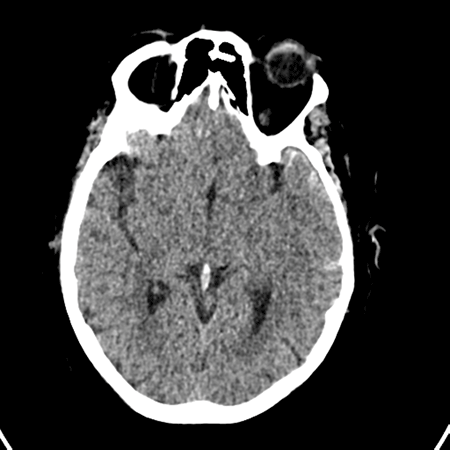 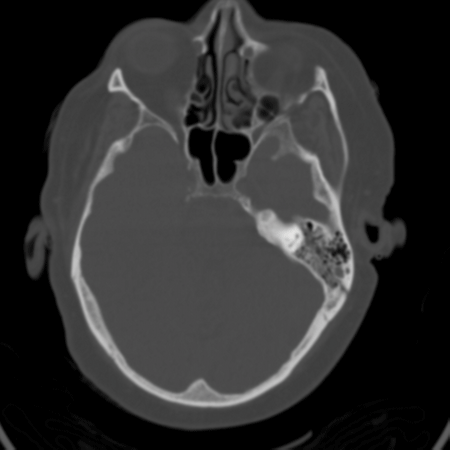 Simply stated, a basilar skull fracture refers to any fracture found at the base of the skull. The temporal bone is involved in 75% of cases, but the occipital, sphenoid, and ethmoid bones may also be involved.1 Temporal bone fractures occur in 18-40% of all skull fractures. They are most common in men between the ages of 21 and 30. This predisposition is not related to any true anatomic differences, but to the greater number of males involved in high-risk activities.2 Traumatic cerebrospinal fluid (CSF) leaks occur in 10-30% of basilar skull fractures and most often present as CSF rhinorrhea.3

Cerebrospinal fluid also accumulates in the middle ear space, and can ultimately expectorate through a perforated tympanic membrane and manifest as CSF otorrhea. In the absence of a TM perforation, hemotympanum may be seen on exam.

Cerebrospinal fluid mixed with blood forms the halo sign when allowed to drip onto filter paper. Contrary to traditional teaching, this sign is not specific to CSF, and may result in false-positives.

Ecchymosis over the mastoid process is known as Battle's sign and typically indicates a fracture of the posterior cranial fossa. Purple discoloration around the eyes, also known as “raccoon eyes,” can be the result of a fracture to the frontal portion of the skull base. Conductive hearing loss, anosmia, nystagmus, and vomiting after head injury should also raise suspicion of a basilar skull fracture.

Prior to the advent of high-resolution CT (HRCT) scanners, the diagnosis of temporal bone fractures was predominantly clinical. The combination of hemotympanum and bloody otorrhea is 75% more common with temporal bone fractures than without fracture: for this reason hemotympanum and bloody otorrhea are ominous physical exam findings.

All patients with basilar skull fractures should be admitted for observation. Management is based on anticipated complications. Most post-traumatic CSF leaks heal with a conservative management of bed rest and head elevation.

The use of prophylactic antibiotics for meningitis is one area of controversy. A large meta-analysis of 1241 patients showed no statistically significant decrease in the incidence of meningitis in patients who were given antibiotics.7 However, the incidence of bacterial meningitis rises significantly if the CSF leak persists for more than seven days. Therefore, in such cases, antibiotics may be indicated.8 Basilar fractures rarely require surgical repair, but in cases of persistent CSF leak, significant cranial nerve compression, or increased intracranial pressure, operative repair may be indicated.6

Maintaining a high index of suspicion for the presence of an epidural hematoma is essential, even if this is not seen on initial imaging studies. Any associated intracranial hemorrhage warrants prompt neurosurgical consultation.

Traumatic facial nerve palsy is another well-known complication of basilar skull fractures. It generally presents two to three days after the injury and should be managed in consultation with an otolaryngologist; glucocorticoids may be beneficial.9 Anosmia due to olfactory nerve injury has been known to occur in as many as 7% of cases of anterior skull-base fractures. Only 10% of patients with traumatic anosmia are expected to recover their sense of smell, and even then only in a delayed fashion of usually months to years.10

Central skull base fractures, frequently involving the sphenoid sinus and temporal bone, are associated with vascular complications. The internal carotid and basilar arteries are particularly vulnerable due to their course through the central skull base and cavernous sinus.

Vascular complications include transection, dissection, and pseudoaneurysm formation. Stroke due to arterial dissection is reported in as many as 31% of carotid artery injuries.11 High-risk patients should undergo CT angiography.

Another rare but unique vascular complication associated with central skull-base fractures is formation of a carotid cavernous fistula (CCF). CCF forms as a direct connection between the ICA and the cavernous sinus and can result in exophthalmos, blindness, stroke, and even death.12

It is of utmost importance to maintain a high clinical suspicion for temporal bone fracture in patients with traumatic head injuries. When suspected, the appropriate imaging should be ordered and associated injuries should be ruled out. Imaging may include either a maxillofacial CT (if facial trauma is noted) or a CT of the temporal bones (if maxillofacial imaging is not required). CT of the head is not the ideal initial imaging study. Missed fractures or delayed diagnosis can lead to debilitating symptoms for patients and potentially life-threatening complications.