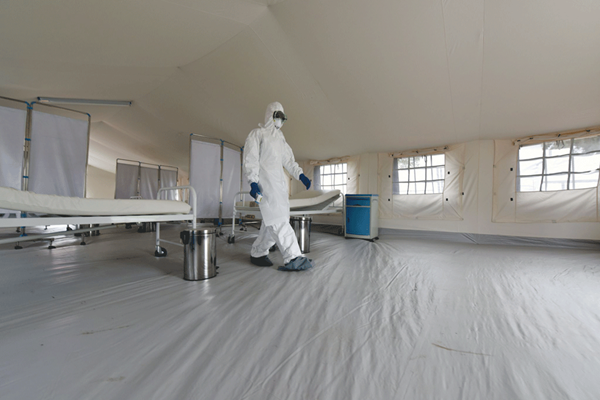 This fall, the first cases of Ebola were diagnosed and treated in the United States. Although the spread of this disease fell far short of the disaster movie scenario envisioned by many, the impact of this potential catastrophe was significant. It turned the attention of many in medicine and health policy to the issue of disaster preparedness. Specifically, the case of Thomas Eric Duncan in Dallas raised many questions about how emergency departments prepare for potential public health crises. As members of the front line for public health, how do we prepare for the unexpected? And what role does federal policy play in our ability to be prepared for the next crisis, whether it is an emerging infectious disease, mass shooting, or act of terrorism?

One of the most important programs that helps hospitals and EDs to be prepared is the Hospital Preparedness Program (HPP). This program is administered under the Department of Health and Human Services, specifically the Office of the Assistant Secretary for Preparedness and Response. It was created following the terrorist attacks of 2001 as a way to prepare hospitals in the event of a large-scale terrorist or bioterrorist attack. Today, it aims to “improve surge capacity and enhance community and hospital preparedness for public health emergencies.”1

In order to achieve this goal, the program funds local and state efforts in areas of planning and coordination, along with disaster drills among first responders and others who are vital to the disaster response. Examples of drills that have been awarded grants in the past include natural disasters, active shooters, and mass-casualty incidents.

Despite the importance of this work, the HPP has suffered from budget cuts in recent years. Due in part to political disagreements, sequestration, and compromises over other issues, the 2014 funding for the HPP was approximately half that of 2003.2,3 ACEP and others have urged Congress to provide funding for this program at the previously approved levels so that this important work can continue.3

Another critical aspect of disaster preparedness is the regionalization of emergency and trauma care. A 2006 Institute of Medicine report provided a harsh assessment of emergency preparedness, noting that care is “highly fragmented” and “very poorly prepared” for public health emergencies.4 As a means of addressing this critical problem, the Affordable Care Act (ACA) authorized the creation of programs designed to tackle these challenges through grants for innovative solutions to these problems and support for rural emergency systems. As described above, however, the existence of a program is not the same as full funding of the program. In a time of budget cuts and struggles over every aspect of the ACA, the continued funding of these critical programs remains in doubt. As a consequence of the political conflicts and standoffs that characterized the most recent Congress, passage of a bill that would have provided continued funding for these programs languished in the Senate for much of 2014.5 ACEP supported passage of this bill and urged members of the Senate Appropriations Committee to vote on the bill.3

As the unexpected emergence of Ebola reminded us, one of the most frightening components of public health disasters is unpredictability. Emergency physicians are a crucial part of the early response to any disaster. Funding for programs that will better prepare us and the systems in which we work are integral to our ability to respond to these crises. Although it is easy to forget the importance of these programs and policies in the face of so many other more controversial areas of health policy, it is important that we support their continued funding so we have the training and resources to be prepared for anything.

Health policy affects all aspects of emergency medicine. Want to learn more about current health policy issues and what you can do to effect change? Register for the ACEP 911 Legislative Network to get weekly e-mail updates from Capitol Hill with advocacy action plans. You can also join us in Washington, DC, each May for ACEP's annual Legislative Advocacy Conference and Leadership Summit to directly campaign for change among your elected representatives. For more information, please contact the EMRA Health Policy Committee at healthpolicyctte@emra.org.