When you joined EMRA and ACEP, did you know that you also became a member of a third organization? There are 53 ACEP chapters, representing each state, as well as Government Services, the District of Columbia, and Puerto Rico (www.acep.org/chapters).

In addition to the numerous educational, networking, leadership, and award opportunities provided by EMRA and ACEP, in most cases residents and students are also welcome to become more involved on a local level through their ACEP chapter.

A recent survey distributed by ACEP's National/Chapter Relations Committee sought to determine what methods are currently being practiced by ACEP chapters to increase resident and student engagement. Of the 45 ACEP chapters that have resident members, 43 responded.

Residents and Students as ACEP Chapter Board Members (Table 1)

The majority of ACEP chapters that responded encourage resident participation on their boards of directors. Three-quarters (77%) of chapters allow residents to serve as voting members of the board, while another 12% appoint residents in a non-voting capacity. Many chapters have opportunities for more than one resident representative on their board, and the most inclusive chapters attempt to have representation from each residency program in their state. Texas and Iowa take their level of engagement to the next level by inviting medical students to serve as board members. 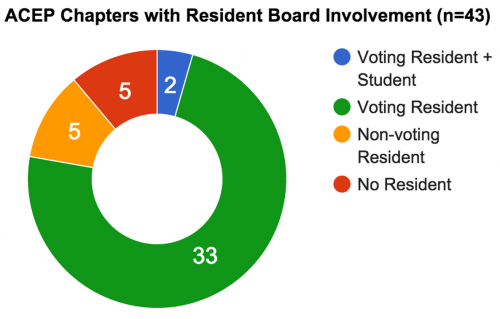 Other Means of Resident/Student Engagement (Figure 1) 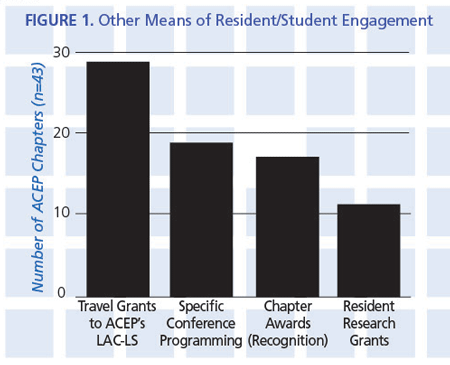 In addition to opportunities to serve on the board or as an ACEP Council delegate, there are a number of other ways that ACEP chapters are engaging physicians-in-training, including:

While the results of the 2015 ACEP chapter survey provide a brief overview of some of the many ways in which students and residents are being engaged locally, there are still a few engagement areas that were not captured and should be investigated in the future.

In terms of measuring student engagement, the current survey identified two states that appoint medical students to their ACEP chapter boards of directors. While this is an important way of recognizing the contribution of a few outstanding students who will undoubtedly serve as future leaders in emergency medicine, it does not capture the engagement of EM-bound students as a whole. Quantifying the existence of state- and chapter-wide medical student committees with student representation from each school, like those that have been implemented in Texas and Michigan, as well as identifying chapters that make annual visits to all of the EMIGs that comprise their current/potential members, are other important metrics for student engagement that should be tracked going forward.

Another important area to study is the transition from resident to attending physician. This is a crucial period for retention in membership organizations. Many ACEP chapters have implemented leadership development programs for recent residency graduates that provide mentorship by experienced chapter and national leaders and allow selected participants to become involved with ACEP in a guided but accelerated pace. The composition of these programs varies greatly, and capturing the collective experiences of chapters that have successfully implemented these programs would likely be beneficial to chapters considering starting programs of their own.