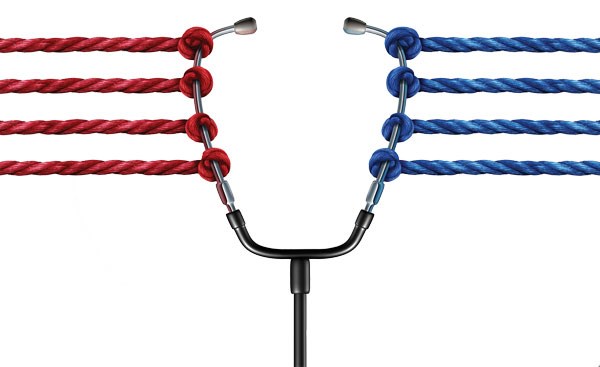 A Comparison of Central Principles

The elections of November 2016, which left the Republican Party in control of Congress and the Executive Branch, have led to a dynamic period a dynamic period in federal health policy. The content of the proposed reforms and how EMRA should best represent EM residents is worth investigating.

Rather than requiring that Americans have health insurance or pay a tax penalty of the greater of $695 per year (indexed to inflation) or 2.5% of household income, the American Health Care Act would mandate a 30% surcharge penalty on the applicable premium for those buying coverage who have not previously maintained continuous health insurance.

Penalties for not maintaining continuous health insurance are an important part of any sensible health system. Five percent of Americans account for 49% of overall health care dollars spent. Without a penalty, it would be fiscally rational to wait until you became sick to buy insurance.

Republicans proposed refundable tax credits that vary with age and phase out for those with higher incomes. Each member of the family would be allowed credits ranging from $2,000 for an individual under 30 to $4,000 for people age 60 and older. The tax credits would begin to decrease for individuals with an income at or above $75,000, with less credit for those making more. Concurrently, the GOP proposal would change the age rating of current law. Presently, health insurers can charge older individuals (who often have higher health care costs), 3 times as much as younger individuals. The GOP planned to loosen age rating restrictions by allowing insurers to charge older individuals up to 5 times as much as younger people or allow states to waive the restrictions on age rating.

Current law provides a sliding scale of tax credits based on family income, where people live, and age. Subsidies increase as the cost of the health plan increases, indexed to the second lowest silver plan (middle tier plan) in that geographic area. Subsidies are provided for individuals with incomes between 100% and 400% of the Federal Poverty Limit.

The differences in the insurance premium assistance between the proposals have important implications for American consumers. Since the subsidies for the ACA are linked to income on a sliding scale, the subsidies are more generous for those with lower incomes. Reformers wanted flat tax credits for incomes up to $75,000, which would provide more assistance than the ACA for those with incomes just under $75,000. Further, the tax credits were not linked to the price of a plan in a specific geographic area, meaning that if the premiums in a region grow faster than inflation the tax credits would cover a smaller proportion of the premium cost than would be covered under the ACA.

Because of differences in the premium assistance and Medicaid coverage, the Congressional Budget Office, a non-partisan government body, estimates that enacting the American Health Care Act would reduce federal deficits by $337 billion over the coming decade.

The ACA expanded Medicaid eligibility to all non-elderly adults with incomes up to 138% of the Federal Poverty Limit. The GOP proposal would have limited federal funding of state Medicaid programs to what the federal government spent this fiscal year, indexed to the state's aggregate enrollment and medical inflation. It also would have cut off the expanded Medicaid eligibility for those who do not maintain continuous Medicaid coverage starting in 2020.

The Congressional Budget Office estimates that the Republican proposal would increase the number of people who are uninsured by 24 million in 2026 relative to current law.

An amended version of the American Health Care Act passed the House in May 2017. House members altered elements of the bill concerning pre-existing conditions, essential health benefits, and age rating restrictions. The CBO estimates that the bill passed by the House would reduce the cumulative federal deficit over the 2017-2026 period by $119 billion, which is $32 billion less than the estimated net savings for the original version of the American Health Care Act. The CBO also projects that if this bill were to become law, 23 million people would lose health insurance coverage by 2026, leaving a total of 51 million people under the age of 65 uninsured. Congressional debate regarding the future of the American Health Care system continues as the Senate debates how best to move forward.

In our continuing efforts to accurately and effectively represent the interests of emergency medicine residents on legislative matters, the EMRA Health Policy Committee continues to closely follow legislative activity related to the health system. Our success in advocating for our peers comes largely as a function of resident engagement. Those interested in becoming further involved in health policy and advocacy are encouraged to reach out to members of the EMRA Health Policy Committee, attend meetings, and provide feedback regarding how we can better represent you.

Editor's note: In July, the Senate Republican leadership unveiled a revised “Better Care Reconciliation Act” (BCRA) to repeal and replace the ACA. The bill did not have enough support to pass in the Senate. On July 18, Senator Majority Leader Mitch McConnell announced the Senate will  focus less on replacing the ACA altogether and instead vote on legislation to repeal the law within the next 2 years.