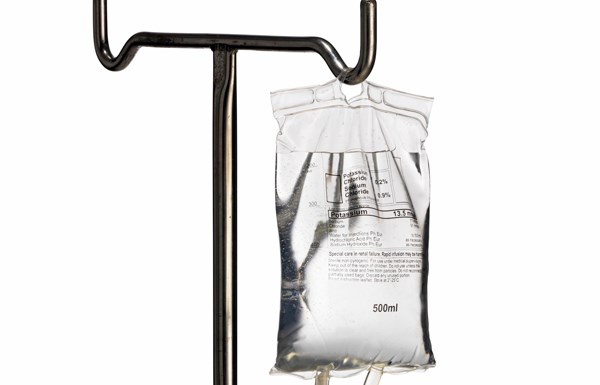 Ahead of the Curve: Assessment of Fluid Responsiveness in the ED

A 70-year-old male with a history of atrial fibrillation and congestive heart failure presents to the emergency department (ED) hypotensive, tachycardic, and hypoxic. Initial resuscitation with 30 cc/kg of crystalloid brings his mean arterial pressure (MAP) from the 40s to the 50s. The concern for septic shock is high, as is the fear of impending respiratory collapse and fluid overload. You ask yourself, “What's my next move? Do I give him more fluid? Where along the Frank-Starling curve does he lie?”

Fluid responsiveness and fluid tolerance remain highly debated topics in emergency and critical care medicine. Generally, to be “fluid responsive” means that a patient has a 15% increase in cardiac output (CO) following intravenous volume expansion (the amount of which has not yet been standardized, but is often 500 mL administered over 10 minutes). The challenge lies in identifying these patients, since studies continue to cite that nearly 50% of all ICU patients are not fluid responsive, implying that their hemodynamics are operating on the flat portion of a Frank-Starling curve.1 Continuing to administer intravenous fluid could risk pulmonary edema and volume overload.

The importance of fluid responsiveness expands beyond the emergency department and is now included in national standards of care. Sepsis continues to be a significant burden on worldwide healthcare resources, and the importance of understanding heart-lung physiology for the appropriate treatment of these patients cannot be understated. As an example of this, the National Quality Forum Measure #0500 mandates that providers routinely re-assess fluid responsiveness during the care of septic patients.2 The current challenge is that there is no standard of care for assessing fluid responsiveness.

How should emergency physicians assess fluid responsiveness? Commonly cited protocols include inferior vena cava (IVC) respiratory variation, lung ultrasound, mini-fluid challenges, and passive leg raising.3 While discussion of the vast range of hemodynamic assessments are beyond the scope of this review, the aim is to explain basic physiologic principles through which one can interpret the current state of affairs. The examples cited in this review focus on IVC ultrasound and passive leg raise, as they are relevant to current discussions in emergency medicine.

Static measures of preload like central venous pressure (CVP) and pulmonary capillary wedge pressure (PCWP) have fallen out of favor. The interpretation of dynamic heart-lung interactions requires an understanding of both the stressor placed upon the cardiovascular system (e.g., the fluid bolus) and the subsequent change in hemodynamics (specifically, CO). In order to assess and interpret the literature on EM-applicable modalities like IVC variation, passive leg raise, or mini-fluid challenges, one must be familiar with venous return and cardiac output curves, because their interaction dictates changes in hemodynamics.4

For now, the easiest way to interpret a venous return curve is to consider it in the context of IVC evaluation. Simply stated, IVC volume (and collapsibility) is a reflection of the right heart and the major factors affecting venous return. As labeled in Figure 1, the IVC collapses when the system is operating on the plateau section of the venous return curve.5 At this point, venous return no longer increases as right atrial pressure falls. Collapse occurs as the intrathoracic vena cava pressures fall below the surrounding pressure. Illustration of IVC collapse is further illustrated in Figure 1a when the cardiac output curve is incorporated.4 The inspiratory shift leftward shows how the system operates on the plateau of the venous return curve; exceeding this point of maximal venous return is when one sees inspiratory collapse.

Despite the popularity of using the IVC to clinically assess fluid responsiveness, it is easy to see how situations like high intra-abdominal pressure or poor cardiac function (ie, atrial fibrillation, valvular disease) make it difficult to interpret IVC respiratory variation.6,7 The undifferentiated nature of ED patients increases the challenge in isolating the multiple variables that affect the IVC. This is why relying on a single diagnostic tool to assess volume responsiveness can be problematic.8

While IVC variation is often confounded by the many forces affecting the right heart, the cardiac output curve shows the status of the Frank-Starling curve in a more straightforward manner. Stated another way by Scott Weingart, MD, FACEP, in his EMCrit podcast, “Fluid responsiveness is an evaluation of not only ”˜Can the RV take it?' but also ”˜Can the LV use it?”9 While IVC respiratory variation lacks accuracy in the undifferentiated ED patient, passive leg raise (PLR) has proven to be more reliable. Seen in Figure 2, the PLR shifts the venous return curve to the right, providing the stressed volume upon which we see increased CO on the cardiac function curve Y-axis. The “auto-bolus” provided by moving the unstressed volume of the lower extremities to stressed volume effectively tests the ability of the LV to use the increased venous return. As evidenced in a meta-analysis by Cavallaro et al in 2010, passive leg raise is an example of “Can the LV use it”?9,10 Multiple meta-analyses have shown the accuracy of passive leg raise as a measure of fluid responsiveness.3,4 The shift of the venous return curve to a higher point on the cardiac output curve in Figure 2 reflects the physiologic reasons behind these conclusions.4

With an understanding of the physiology described, the bulk of research on fluid responsiveness focuses on the hemodynamic index, or the method for detecting any changes in cardiac output. When distilled to its basic components, fluid responsiveness is made of 2 parts: the approximation of a fluid bolus (ie, the stressor or augmentation of venous return/preload placed upon the system) and the measurement of hemodynamic change (ie, CO, SV, or pulse pressure variation). The current research on fluid responsiveness is rapidly changing as there are many different combinations of these parts. Transthoracic echocardiography (TTE), bioimpedance, and arterial line blood pressure variation are a few of the different hemodynamic indices that have been combined with PLR. For example, a handful of recent systematic reviews have examined the concept of fluid responsiveness using bedside echocardiography to detect stroke volume both before and after a PLR.10-12

Though mostly studied in ICU populations, the plausibility of using TTE assessments of cardiac output in conjunction with passive leg raise to assess patients' fluid responsiveness is promising.10,11 However, the actual implementation of PLR is challenging. Obtaining the sonographic window for either IVC or cardiac output measurements can be challenging in the emergency department and is often dependent on ultrasound operator skill and patient body habitus.

Despite the shortcomings of clinical implementation, the PLR literature shows how other fluid responsiveness algorithms are mechanistically valid in light of heart-lung physiology. Intensivists and emergency physicians have yet to come to agreement on how best to assess fluid responsiveness, but an understanding of physiology can help drive clinical decision-making. By using the gestalt gleaned from the clinical situation and point of care ultrasound findings like global cardiac function and IVC variation, the general shape of both venous return and cardiac function curves can be determined. Given the physiologic mechanism, the evaluation of fluid responsiveness in the ED is evolving to meet the needs of resuscitating the critically ill patient. 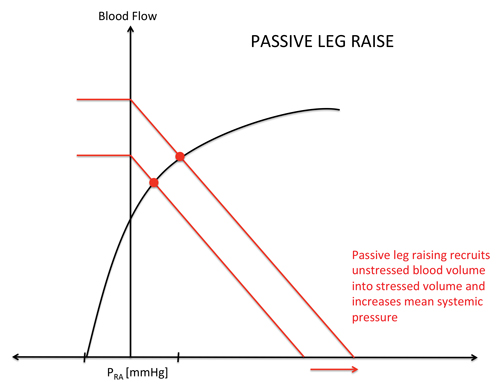 Special thanks to Dr. Jon-Emile Kenny and his informative website, heart-lung.org, for the figures and explanations.