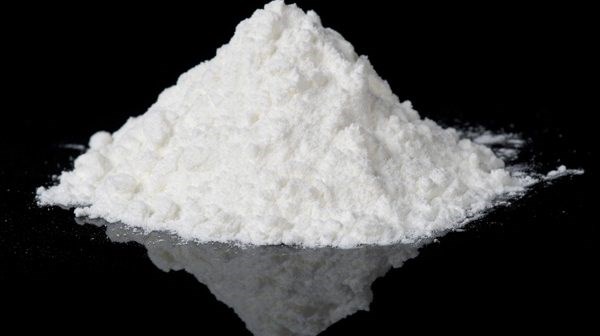 Anhydrous Caffeine: The Other White Powder

One teaspoon of anhydrous caffeine may equal approximately 25-28 cups of coffee, which can be deadly.

Caffeine, formally known as (1,3,7-trimethylxanthine), is a natural xanthine alkaloid that acts as a central nervous system stimulant.3 It is commonly consumed as a beverage or a supplement for its stimulant effects, and it’s billed to enhance energy, concentration, and athletic performance; however, it can cause severe toxicity when consumed in excess.1

Anhydrous, or powdered caffeine, comes in many different forms and is marketed as an energy supplement and stimulant product. Unfortunately, the U.S. Food and Drug Administration does not regulate supplements, so the dangers of anhydrous caffeine may go unnoticed among the general public purchasing these products. Anhydrous caffeine is especially dangerous because small doses that can cause severe toxicity. One teaspoon of anhydrous caffeine may equal approximately 25-28 cups of coffee, which can be deadly.5,10

It is important for emergency physicians to recognize that anhydrous caffeine is an unregulated substance and can be the culprit for patients presenting with a multitude of symptoms, ranging from feeling “jittery” and “anxious” to life-threatening cardiac dysrhythmias.

Pathophysiology
Caffeine is a methylxanthine, which is metabolized to paraxanthine, theobromine, and theophylline. It acts by inhibiting phosphodiesterase, antagonizing adenosine receptors, and releasing catecholamines.2,7These changes lead to an increase in sympathetic activity.

Caffeine is especially potent because of its rapid absorption. After ingesting caffeine, it reaches peak plasma concentration within approximately 45 minutes and has a half-life of approximately 5 hours.7 Caffeine undergoes hepatic metabolism via N-demethylation, acetylation and oxidation. Chronic ingestion of alcohol and medications using these same pathways may prolong the half-life of caffeine by approximately 72%.3

Blood concentrations of caffeine ranging from 80-100 mg/L have been found to be lethal in humans. Fatalities have been documented with ingestions as little as 50 grams of caffeine.3 Anhydrous caffeine is especially potent, and 1 tablespoon can contain a lethal dose (150mg/kg).4,6,8,9

A laboratory analysis of anhydrous caffeine products available online indicates that most products that are currently being sold are extremely pure (90%) and consistently lack clear dosing instructions on the packaging.1

Clinical Presentation
Anhydrous caffeine became more well-known in 2014, when an 18-year-old wrestler from Ohio died after a caffeine overdose. He was found to have a blood caffeine level >70 mg/L, and the autopsy revealed his cause of death was attributed to cardiac arrhythmias and seizures from the caffeine overdose. Similarly, a 39-year-old-male died after a caffeine powder overdose, and his blood caffeine level was found to be 350 mg/L5.

Anhydrous caffeine labels fail to warn consumers of the narrow margin of safety. Some labels recommend 1/16th teaspoon (approximately 200mg) or 1/32nd teaspoon as a serving. This is not feasible to measure with the basic kitchen tools and would require digital milligram scales.5,10 These misconceptions led the FDA to advise consumers to avoid pure powdered caffeine and to report any adverse effects associated with powdered caffeine.10

Symptoms of caffeine toxicity include nausea, vomiting, restlessness, altered mental status, anxiety, diaphoresis, dizziness, palpitations, seizures, and cardiac arrhythmias. These symptoms in turn can cause initial hypotension, followed by hypertension, metabolic acidosis, and vomiting. The differential diagnoses for hypotension, metabolic acidosis and tachycardia is broad. It can include such diagnoses as sepsis, diabetic ketoacidosis, ischemic states, hypovolemia, or other drug overdoses such as cocaine, amphetamines, and tricyclic antidepressants.2 This sympathetic overdrive can cause cardiac dysrhythmias such as wide complex tachycardia, ventricular alternans, ventricular fibrillation, and ultimately cardiac arrest.

Recognition of a caffeine overdose is paramount, followed by appropriate treatment. Treatment includes aggressive intravenous fluid resuscitation, heart rate control with beta blockers such as metoprolol or esmolol, and antiemetics. Metoprolol and esmolol are the beta blockers of choice. Given that severe toxicity can lead to hypotension, metoprolol and esmolol work well by providing rate control without worsening blood pressure. Patients with severe toxicity should be admitted to the intensive care unit. Given the relatively rapid absorption and elimination of caffeine, administering activated charcoal will solely worsen vomiting and will not expedite the removal of caffeine. Most patients typically have resolution of their symptoms within 24 hours.

It is important for ED clinicians to recognize and appropriately treat caffeine overdoses. Given the high purity, small doses, and availability of anhydrous caffeine, patients may experience severe toxicity quickly, and clinicians should have this diagnosis on their radar and be ready to treat appropriately.