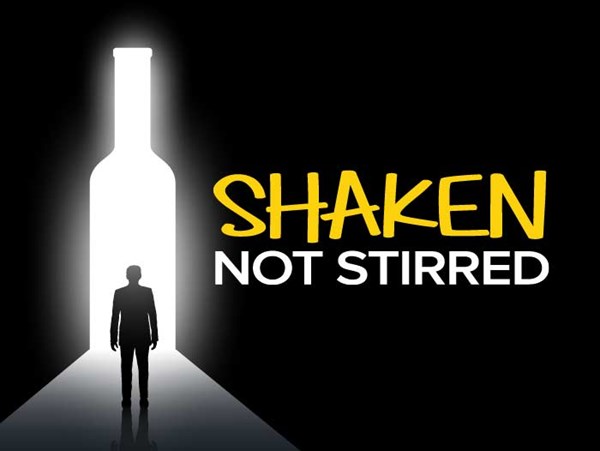 A 43-year-old homeless Hispanic male presents to the emergency department (ED) complaining of generalized pain and weakness. On exam he is anxious, diaphoretic, and tremulous. He is mildly tachycardic, but vital signs are otherwise within normal limits. Although he denies alcohol abuse you are suspicious enough to order an alcohol level with his initial labs. His serum alcohol level turns out to be 104. Ultimately, he is diagnosed with mild alcohol withdrawal, given 50 mg chlordiazepoxide, and discharged home with a list of detoxification clinics.

About 18 hours after discharge, he returns to the ED complaining of tremors. He is tachycardic, hypertensive, diaphoretic, and mildly hyperthermic. He is given a trial of 10 mg intravenous (IV) diazepam with only mild improvement of his symptoms. His alcohol level is now zero.

Ethanol produces its effect by binding to gamma-aminobutyric acid (GABAA) receptors, thus enhancing the effect of GABA, the major inhibitory neurotransmitter in the brain. In addition, ethanol reduces glutamate's excitatory effect on the N-methyl-D-aspartate (NMDA) receptor, resulting in a simultaneous enhancement of inhibitory neurotransmitters and a suppression of excitatory neurotransmitters.1 Long-term use of ethanol subsequently results in downregulation of GABAA receptors and upregulation of NMDA receptors. Cessation of alcohol or a reduction from chronically elevated levels therefore results in a decrease in inhibitory tone and unregulated excess excitation, manifesting initially as irritability, anxiety, tremors, headache, diaphoresis, and insomnia.

Alcohol withdrawal syndrome (AWS) is a clinical diagnosis, and symptoms can range from mild tremulousness and anxiety to withdrawal seizures and delirium tremens (DTs). Mild symptoms can develop within 6-12 hours after the last drink.1 Alcoholic hallucinations may occur within 12-48 hours and include visual or tactile hallucinations with normal mentation. It is critical to differentiate between alcoholic hallucinations and DTs because the latter carries such a high mortality risk. Alcohol withdrawal seizures typically occur within 12-48 hours of last alcohol intake. Patients usually have one brief generalized tonic-clonic seizure or a brief series of seizures with a postictal period, followed by a return to their baseline mental status. Status epilepticus or prolonged mental status alteration is not typical of withdrawal seizures and should prompt further investigation. DTs occur 48-96 hours after last alcohol intake and consist of global clouding of the sensorium, autonomic instability, and psychomotor agitation. These patients require close monitoring and a rapid escalation of workup and treatment.

Important historical data includes duration of alcohol use, usual quantity of intake, time since last drink, previous alcohol withdrawal, presence of concurrent medical or psychiatric conditions, and ingestion of other agents. The clinician should always consider why the patient has stopped drinking in the first place. Was there a traumatic event? Do they have an infection? Or was it purely financial? This may help focus the workup.

The patient is placed on the Clinical Institute of Withdrawal Assessment for Alcohol (CIWA) protocol and over the next few hours becomes increasingly agitated, confused, and tremulous. He requires physical restraints due to his visual hallucinations and psychomotor agitation. After an initial bolus of 10 mg diazepam IV, his dose is then doubled every 5 minutes for a total of 220 mg in less than 1 hour. He is started on a lorazepam infusion while awaiting additional diazepam and phenobarbital from the pharmacy.

Benzodiazepines are the initial treatment of choice for AWS. Any benzodiazepine may be used, but one should be familiar with the various pharmacokinetics. Diazepam has a faster onset than lorazepam (1-3 minutes vs. 5-10 minutes) and has active metabolites that will remain effective for up to 24 hours.2 In severe withdrawal, intravenous therapy is most appropriate because of guaranteed absorption and rapidity of onset. Benzodiazepine resistance is possible in severe withdrawal, and is defined as the need for greater than 40 mg IV diazepam in 1 hour. These patients have higher rates of intubation, ICU admission, and overall morbidity and mortality.3

It is of paramount importance to develop an algorithm, whether personal or departmental, for dose escalation of benzodiazepines. Dose escalation should be continued until cessation of withdrawal symptoms. For cases that do not respond to initial management, the algorithm should include the use of adjuvant medications, such as a second GABAergic drug like phenobarbital or propofol.4 Phenobarbital has a longer time of onset and may lead to stacking or iatrogenic overdose, whereas propofol has a near-immediate onset but can be difficult to titrate. When considering these adjuncts, intubation must be kept in mind. Ketamine, an NMDA receptor antagonist, is another reasonable option and has been shown to decrease benzodiazepine requirements.5 Carbamazepine has been used in Europe for mild withdrawal where an IV formulation is available. However, there is little data on the use of anticonvulsants in severe AWS.6 Finally, dexmedetomidine is a central alpha-adrenergic agonist that is used as a sedating agent without effect on respiratory drive. It has been shown to decrease heart rate and blood pressure in AWS but it is expensive and does not decrease overall treatment duration.7

The patient is admitted to the ICU for delirium tremens, where he is transitioned from a continuous lorazepam infusion to intermittent IV boluses as needed, in combination with oral chlordiazepoxide. He is safely discharged to an inpatient detoxification unit 14 days later.

The emergency department physician must be equipped to rapidly recognize and properly escalate treatment in moderate to severe AWS. Every physician should have his/her own escalation protocol or, ideally, synthesize a department-wide or hospital-wide algorithm for this potentially fatal syndrome.