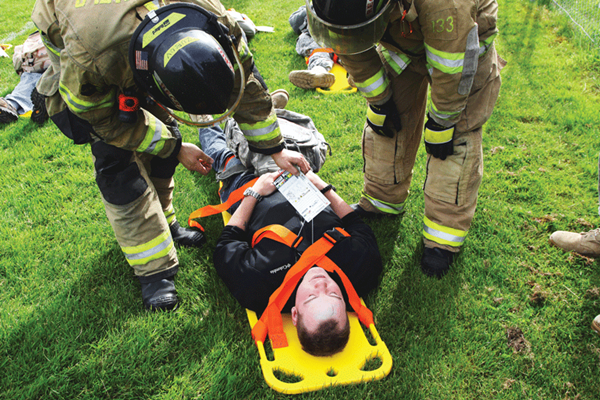 Backboards: Do They Really Have Your Back?

Spinal immobilization has long been considered standard practice for pre-hospital trauma patients. Placing patients on long spinal boards is one of the most common interventions performed by EMS providers, but this blanket practice is being re-evaluated, focusing instead on a more selective approach.

The concept of spinal immobilization was developed as a mechanism to keep the spine in neutral alignment after a suspected injury. In-line stabilization attempts to limit motion of an injured spine, thereby potentially minimizing aggravation of a spinal injury or worsening of the patient's neurologic outcome. Despite the emphasis in EMS textbooks on the importance of spinal immobilization, there is little in the literature supporting this practice for all patients involved in trauma. Studies have suggested that mishandling a traumatized cervical spine is associated with poor outcomes. An Australian retrospective case series by Toscano et al. revealed that a large number of trauma patients developed major neurologic deterioration, attributed largely to inadequate immobilization and improper patient handling.1

In cases of penetrating trauma, spinal immobilization is associated with twice the mortality compared to those patients not immobilized, as described by Haut et al.4 This study, however, is somewhat limited by a lack of analysis on how transport times may have affected mortality. In addition to highlighting the largely unproven benefit of universal spinal immobilization, this particular study underscores the potential harm associated with immobilization in penetrating trauma. It is the position of the National Association of EMS Physicians (NAEMSP) that patients with penetrating trauma to the head, neck, or torso, without evidence of spinal injury, should not be immobilized to a backboard.5

Backboarding appears to be associated with several risks to the patient. Immobilization has been linked with restriction of normal respiration by decreasing compliance of the chest, and can reproduce a restrictive pulmonary process.6 In the pediatric population, there is a mean reduction in forced vital capacity (FVC) to 80% of baseline.7 Furthermore, it is associated with higher pain scores and may contribute to more imaging being performed as compared to non-immobilized children, despite controlling for severity of injury.8 Backboards have been shown to contribute to patient pain and discomfort,9 and can also be a factor in the development of pressure ulcers.10

The NAEMSP recently issued a position statement on the use of long backboards in the pre-hospital setting. Immobilization is potentially appropriate in patients with blunt injury and an altered level of consciousness, spinal pain or tenderness, neurologic complaints, an anatomic deformity of the spine, high energy mechanism of injury, or for patients who are intoxicated, are unable to communicate, or have a distracting injury.5 The NAEMSP supports judicious use of spinal boards for immobilization.

As studies have suggested that spinal immobilization is not necessarily benign, there has been an increasing focus on determining which patients truly need to be placed on a backboard. One pre-hospital study has shown that in patients who are not altered or intoxicated, the negative predictive value for spinal injury is 99.5% if no spine tenderness/pain or extremity fractures are present.11 In 2002, the state of Maine introduced an EMS spine assessment protocol that included immobilization decision-making based upon the mechanism of injury, mental status, presence of distracting injury, neurologic findings, or spine pain/tenderness. This protocol was found to have a negative predictive value of 99.9%, and an 87% sensitivity for detecting an acute spine fracture.12 These studies indicate that an algorithmic decision-making process is reliable in the pre-hospital setting.

Spinal immobilization has long been an element of pre-hospital medicine. It has been taught as a necessity of trauma, though benefits of universal immobilization are unclear and potential harm has been demonstrated. An algorithmic approach based on validated criteria to limit backboarding to those who truly need immobilization may be valuable. As noted by the NAEMSP, however, spinal precautions are paramount in at-risk patients in whom spinal injury is suspected.5