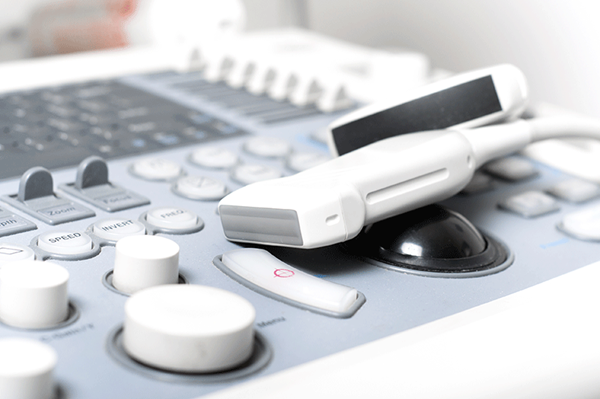 Case
A 60-year-old male rolls in by EMS with a complaint of shortness of breath. He was discharged from prison two months ago, at which time he ceased all his medications. He believes he was on a “water pill” for his “kidney problem.” He smokes a pack a day. Additionally, he complains of mild chest pain and lower-extremity edema, worse on the left side. He is in moderate distress, tachypneic, tachycardic, and hypoxic with three-word dyspnea. You do not appreciate any JVD, but notice decreased lung sounds at the bases with a diffuse, mild expiratory wheeze. His heart is tachycardic but regular, without murmurs, rubs, or gallops. His abdomen is slightly distended, but soft and non-tender. His lower extremities have 3+ edema on the left and 2+ on the right. His initial EKG is nondiagnostic.

Ultrasound outperforms chest radiograph in nearly every situation when used by trained physicians.

Discussion
Shortness of breath is a common chief complaint. The differential diagnosis is broad and the possibilities range from immediate life threats to those managed as an outpatient. As clinicians, we need a diagnostic tool that enables us to rapidly narrow the differential diagnosis and direct early management. Ideally, this tool will be readily available and have high sensitivities and specificities for the diseases we are most concerned about. For the patient with undifferentiated shortness of breath, ultrasound is that tool. So, while the X-ray tech is in another part of the emergency department and the nurse is attempting intravenous access for the third time, grab the ultrasound machine.

There are a number of manuscripts in the literature describing how to use point-of-care ultrasound (POCUS) for the patient with undifferentiated shortness of breath. Lichtenstein, et al, created an algorithm titled “The Blue Protocol” that can be used with lung ultrasound to differentiate between etiologies.6 However, this protocol did not include echocardiogram as part of the evaluation, and for the novice sonographer the algorithm can be cumbersome. In another publication, Drs. Nagdev and Mantuani demonstrated how analyzing the heart, lungs, and IVC with ultrasound can differentiate heart failure from chronic obstructive pulmonary disease (COPD).7 Combining and simplifying these strategies creates a logical and high-yield approach. 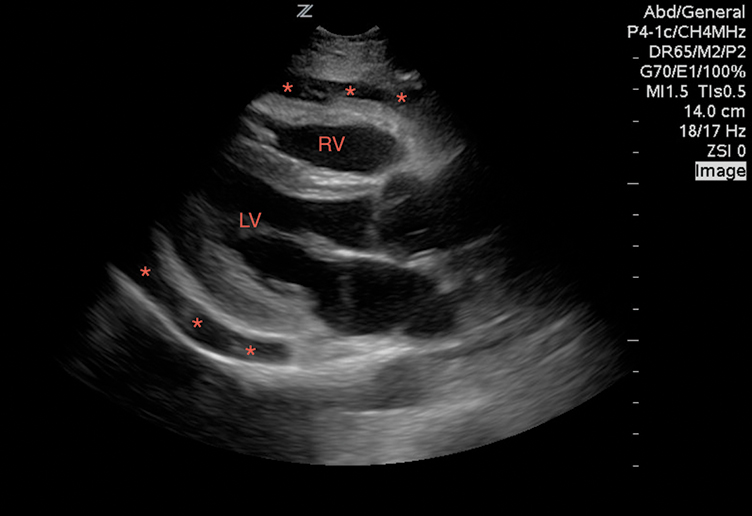 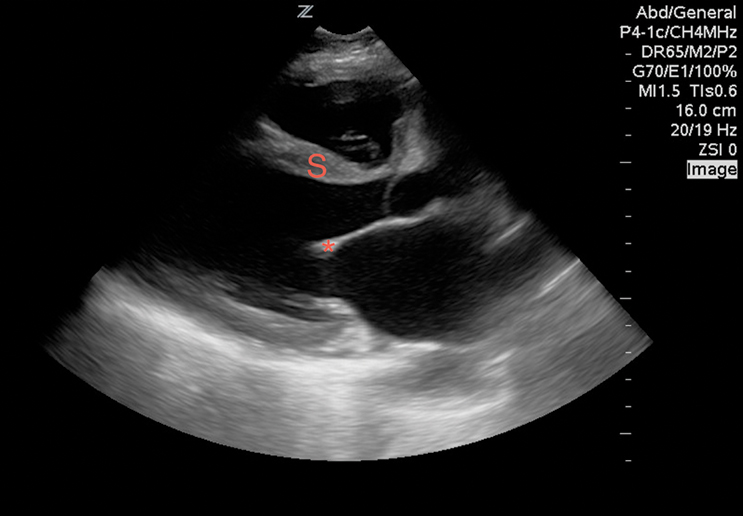 Image 2. A poorly contracting heart in the setting of decompensated heart failure. The anterior leaflet of the mitral valve (*) does not come close to the inter-ventricular septum (S) during diastole, demonstrating a severely depressed EF. 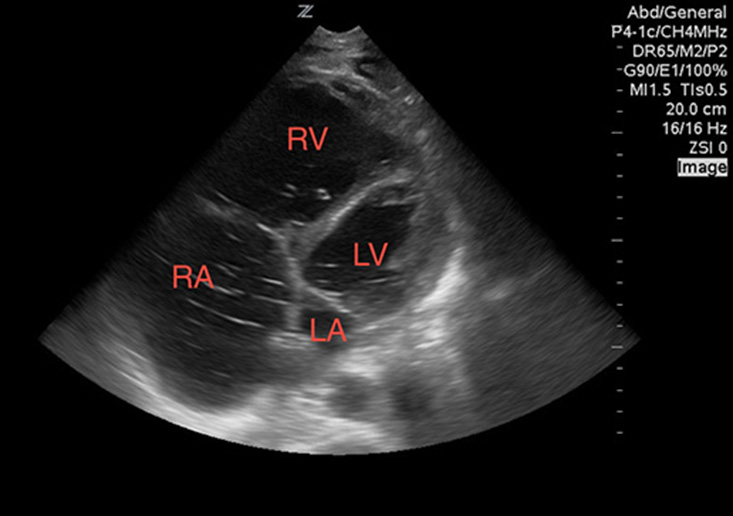 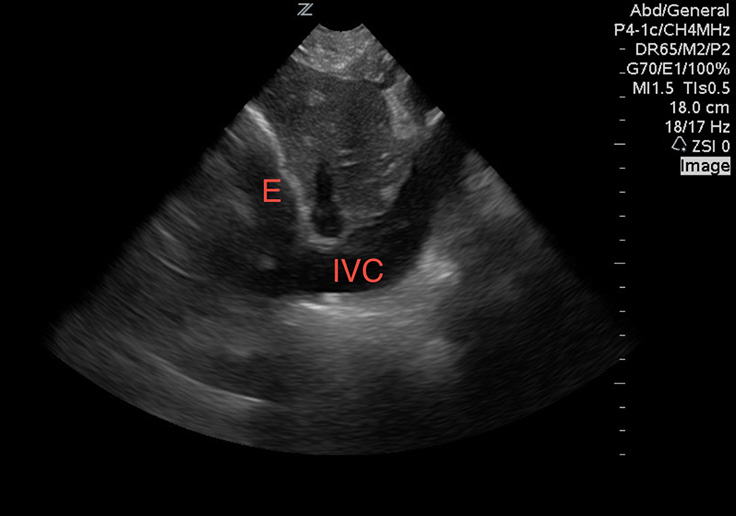 Image 4. A distended IVC with a pericardial effusion (E), consistent with tamponade physiology.

While viewing the cardiac windows, gain a sense of the overall cardiac function and ejection fraction (EF). Emergency sonographers can categorize cardiac contractility as normal, depressed, or severely depressed and can identify a severely depressed left ventricular EF with nearly 100% sensitivity.9 In a heart with a normal EF, the anterior leaflet of the mitral valve will touch, or nearly touch, the inter-ventricular septum. You may choose to measure the distance during diastole from the anterior leaflet of the mitral valve to the inter-ventricular septum using M-mode. A distance of less than 7 mm suggests a normal EF, whereas greater than 7mm is 100% sensitive for a severely depressed EF (Image 2). This is known as E-point septal separation, or EPSS.10 In the apical four-chamber view, compare the diameters of the right (RV) and left ventricle (LV). A normal RV is less than two-thirds the size of the LV. A dilated RV in the correct setting is 98% specific for right heart strain from a pulmonary embolism11 (Image 3). You may also note a wall motion abnormality as evidence of an old or new myocardial infarction. Adding color to the exam in Doppler mode enables you to also identify valve incompetence.

While viewing the heart in the sub-xiphoid window, align the probe indicator toward the patient”™s head and reduce the angle of the transducer to evaluate the inferior vena cava (IVC). A pericardial effusion with a full, distended IVC is very worrisome for tamponade (Image 4). If there is respiratory variability, tamponade is excluded with few exceptions. Without a pericardial effusion, a dilated IVC is consistent with fluid overloaded states. An IVC diameter that varies widely during respirations suggests an etiology other than heart failure.12 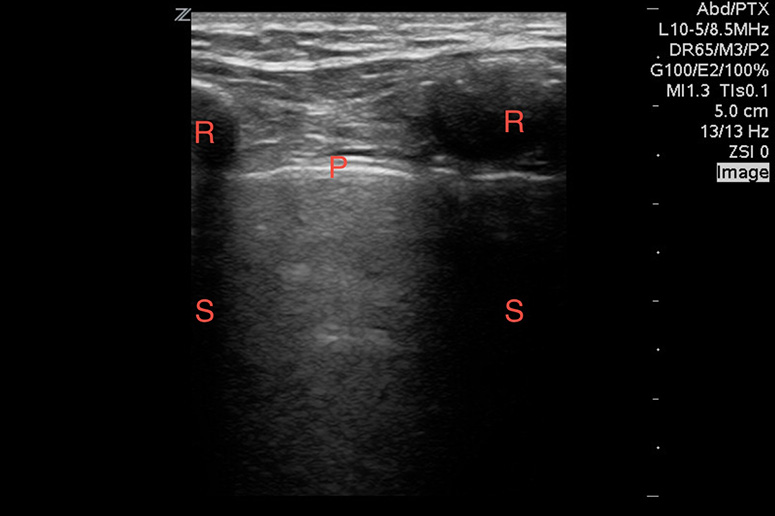 Image 5. With the linear array probe, the pleura (P) can be seen sliding between two ribs (R), which demonstrates posterior shadowing (S). 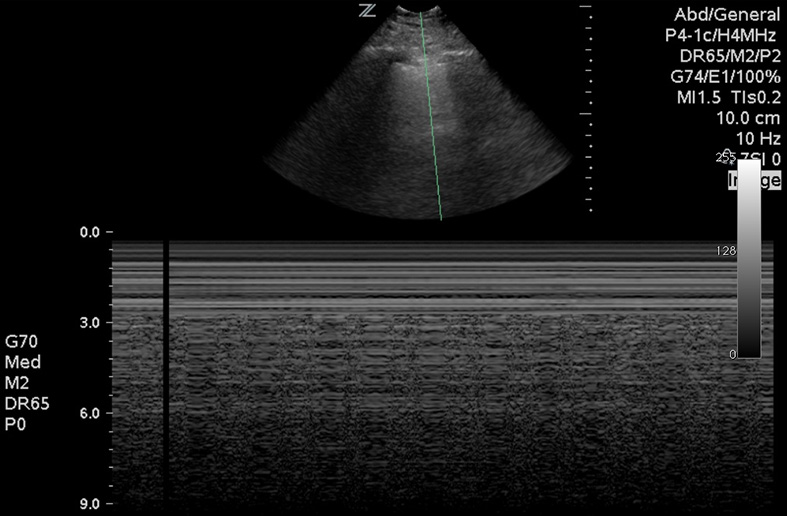 Next, move to the lungs. In a prospective study of 27 patients, lung ultrasound was more sensitive than chest X-ray and as sensitive as computed tomography in identifying pneumothoraces. Fluid in the lungs will fall to the dependent portions, whereas air rises to the superior and anterior chest. Most emergency phyisicans are familiar with the concept of lung sliding (Image 5). Start evaluating for this finding by placing the probe towards the lung apex, between the second and third intercostal space in the mid-clavicular line. Then move down through the sixth-eighth intercostal spaces. This may be done in an upright or supine position. In the setting of trauma, absent lung sliding generally means a pneumothorax is present. If clinically permitted, examination of all lung segments may reveal a lung point, which is the point of separation of the visceral and parietal pleura. This is nearly 100% specific for a pneumothorax. M-mode may also be used to evaluate for pneumothorax. The classic “seashore sign” (Image 6) is present when there is normal lung sliding, as compared to the “bar code” sign (Image 7), which is characteristic of pneumothorax. The same technique and findings are also useful to determine main stem bronchus intubation, because one lung will not be ventilated.13 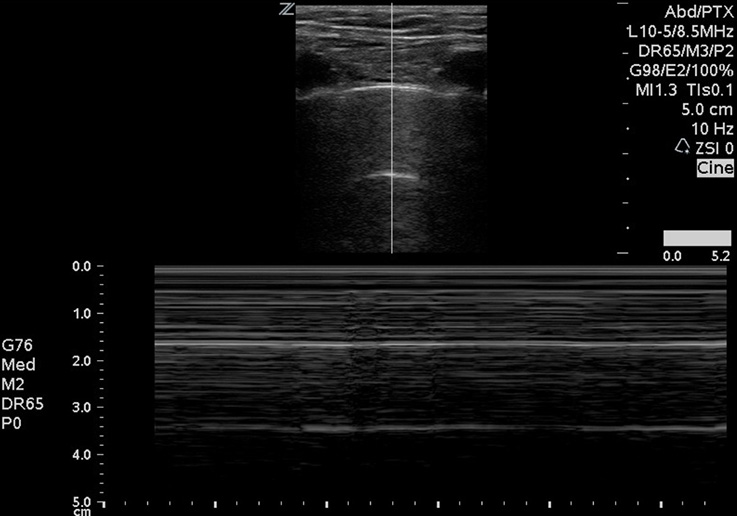 Image 7. The barcode sign demonstrating a pneumothorax with M-mode. 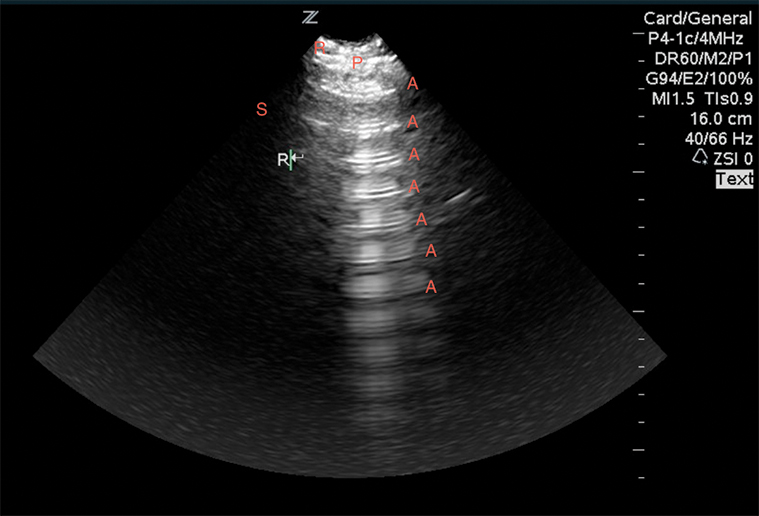 After ruling out a pneumothorax, divide each hemi-thorax into four segments bordered by the posterior axillary line, anterior axillary line, medial clavicular line and the inter-nipple line. Evaluate the lung in each quadrant for lung sliding, A-lines, B-lines, consolidations, and effusions. A-lines are regular horizontal hyperechoic lines that reverberate from the pleura and are indicative of a normal or hyperinflated lung (Image 8). If all lung segments appear to have lung sliding and A-lines, then the patient”™s differential is narrowed to that of a patient with a normal or hyperinflated chest X-ray. This may include asthma, COPD, anemia, acidosis, neuromuscular disorders, and pulmonary embolism. If pulmonary embolism is suspected, performing lower extremity deep vein thrombosis (DVT) studies can confirm (but not rule out) the diagnosis. In a prospective, 47-patient study, a two-point compression exam at the femoral and popliteal veins was nearly 100% sensitive and specific for DVT.14 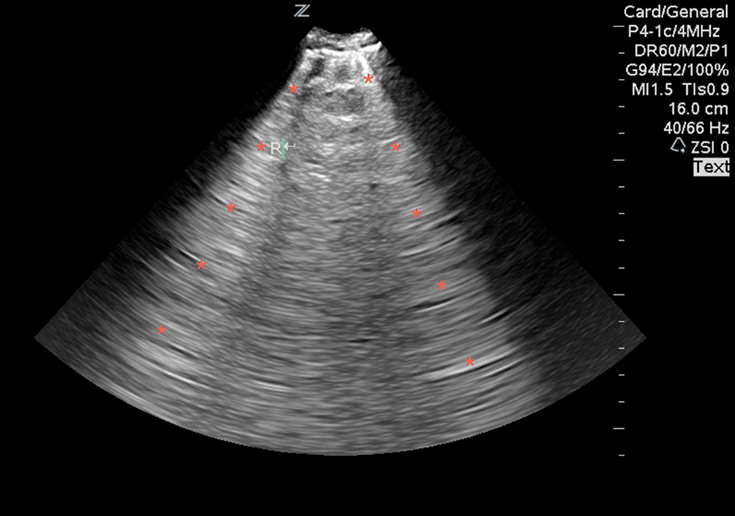 Image 9. Lung ultrasound on a patient with pulmonary edema and B-lines (*). 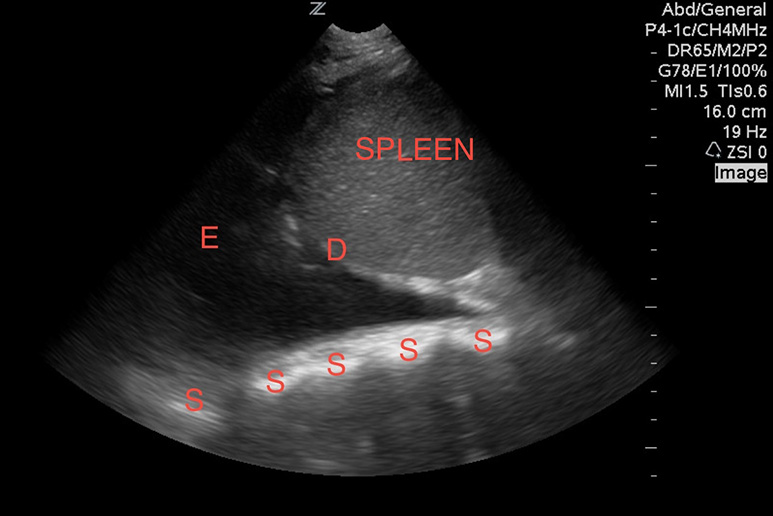 Image 10. A large pleural effusion (E) visualized above the diaphragm (D) with a spine sign (S).
A floating lung is not visualized in this image.

B-lines are hyperechoic vertical lines that originate from the pleural line, obliterate A-lines, and often run off the bottom of the image (Image 9). Three or more in the screen are indicative of an interstitial syndrome. A diffuse B-line pattern in all lung segments narrows the differential to those conditions that present with a diffuse interstitial lung pattern, such as pulmonary edema (cardiogenic and non-cardiogenic), multifocal pneumonia, and pulmonary fibrosis. A focal B-line pattern in one or two lung segments suggests a focal interstitial process, such as pneumonia, pulmonary contusion, or pulmonary infarction. 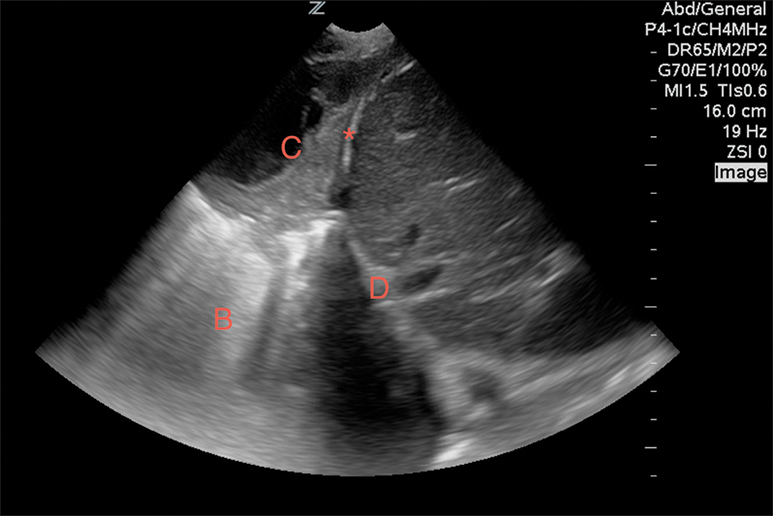 Image 11. A pulmonary consolidation (C) with a diffuse B-line pattern (B) visualized above the liver (L) and diaphragm (D).

Unless loculated, pleural effusions should be found in the dependent portions of the lung, and can most easily be visualized at the lower lung segments and costophrenic angles. Without effusions, a normal mirror artifact of the liver or spleen is seen reflecting above the diaphragm, and the spine should not be visible, as air scatters the ultrasound waves. However, when a pleural effusion is present, an anechoic pocket of fluid can be seen, and often the floating free edge of the lung can be visualized (Image 10). Since ultrasound waves are transmitted well through fluid, the spine may be apparent. This is called the “spine sign.” Consolidated lung appears like solid tissue on ultrasound and is often referred to as “hepatization” of lung, as it has a similar appearance to the liver (Image 11).15

Combining the cardiac, IVC, lung, and DVT POCUS exams rapidly narrows the differential diagnosis and results in early directed management. Ultrasound may cost you more time at the bedside, but the initial investment of time is well worth it when it enables you to identify important pathology, make critical diagnoses early, and save lives. Multiple studies demonstrated the relative ease and short period of time it takes to use these techniques effectively.16 However, even expert sonographers should understand their limitations and not hesitate to employ other diagnostic tools when necessary. The greatest limitations of POCUS are the operator”™s expertise and the patient”™s body habitus.

Case resolution
On ultrasound, the patient had a markedly decreased EF, dilated IVC, diffuse B-line pattern on lung exam, and negative DVT studies. Additionally, he had bilateral moderate pleural effusions and a modest amount of abdominal free fluid. His clinical picture was consistent with congestive heart failure and he improved with BiPAP, nitroglycerin, and diuretics. He was admitted to the cardiology service and was discharged two days later on a new medication regimen.