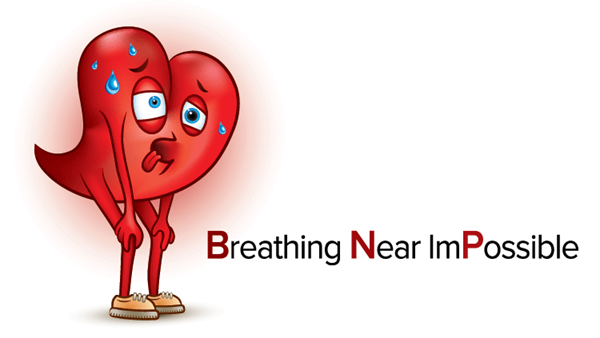 You are working in the acute side of your emergency department when EMS brings in a patient in respiratory distress on CPAP. EMS reports a 58-year-old female with a history of chronic obstructive pulmonary disease (COPD), congestive heart failure (CHF), hypertension, and diabetes who is complaining of acute onset shortness of breath that began the night prior to presentation. Vitals are: temp 98.9, HR 100, BP 150/90, RR 35, and O2 saturation 92% on CPAP. Exam shows an obese female who is drowsy and tachypneic. Pulmonary exam reveals diffuse expiratory wheezes as well as bibasilar rales. She has mild lower extremity edema. You wonder if you should begin treatment for CHF, COPD, or both, and you consider sending a B-type natriuretic peptide (BNP) to help aid in your decision-making.

Because BNP is released from the ventricular myocardium in response to stress on the myocardial wall, it is commonly elevated in conditions such as CHF, pulmonary hypertension, pulmonary embolism, cor pulmonale, acute coronary syndromes, left ventricular hypertrophy, renal failure, and sepsis.1 A variety of clinical immunoassays are available for the detection of BNP, including a rapid point-of-care assay. Most often, a value less than 100 ng/L is used as a cutoff in ruling out heart failure. In a recent meta-analysis exploring the diagnostic accuracy of BNP in patients presenting in acute heart failure, BNP values < 100 ng/L had a pooled sensitivity and specificity of 95% and 63%, respectively.2 As the threshold increased, sensitivity decreased and specificity remained quite variable. Thus, while BNP has an excellent ability to exclude CHF, its diagnostic accuracy is limited.

Because there is no gold standard to which BNP can be compared (including echocardiography), diagnostic accuracy is difficult to assess. Many studies have used retrospective chart review by cardiologists, among whom there have been demonstrated disagreements.2-4 Furthermore, most of the literature focuses on the predictive value of BNP when there is already a suspicion for CHF. However, emergency physicians already outperform the BNP assay when using clinical gestalt alone. In one study, when emergency physicians were 95-100% certain of a diagnosis of CHF, they would accurately diagnose the patient 95% of the time. When the probability of CHF was thought to be less than 5%, emergency physician accuracy in diagnosing CHF was 92%. This was in comparison to BNP at a cutoff of 100 ng/L, which had a diagnostic accuracy of only 84%.5

When the clinician places the patient in an intermediate group of diagnostic uncertainty, a very low or very high BNP can be clinically useful. A BNP under the lower limit (usually 100 ng/L, but sometimes 50-80 ng/L) can virtually exclude the diagnosis of CHF, while a value greater than the upper cutoff (usually > 400 or 500 ng/L) can assist in ruling in a CHF diagnosis. However, just under half (40%) of BNP values will fall in a non-diagnostic range between this upper and lower limits, which provides the physician with little direction.5

Typically BNP values greater than 400-1000 ng/L have been regarded as confirmatory. However, clinicians should be aware that greatly elevated BNP levels (such as those >1000 ng/L) can also be seen in sepsis and pulmonary embolism, thus creating false positives.6,7 Female sex and greater age have also been associated with higher BNP values.8 Conversely, a 2005 study examining the relationship between BMI and BNP showed that 20% of acute CHF patients in both overweight (BMI: 25 to 29.9 kg/m2) and obese (BMI:  ‰¥30 kg/m) groups had BNP values < 100 pg/ml. BNP proved to be inversely related to BMI with a 3% decrease for every 1 unit increase in BMI.9

A meta-analysis published in 2011 pooled 4 randomized controlled trials comprising 2,041 patients to study the usefulness of BNP in managing the acutely short of breath patient. There was no significant difference in mortality, re-hospitalization rates, length of stay, and admission rates in those who had a BNP sent compared to those who did not.10

Lung ultrasound is a notable adjunct to history and physical examination when assessing the acutely short of breath patient. Ultrasound is a noninvasive test that can generally be performed at the bedside in less than 5 minutes and provide important information early in the emergency department course.11 With a proven sensitivity around 94% and specificity around 90%, this rapid bedside test can be a helpful adjunct in diagnosing congestive heart failure.12

The patient was put on bilevel noninvasive ventilation and a lung ultrasound was performed. There were no “B” lines in the anterior and lateral chest walls bilaterally. Given the history and physical and no evidence of pulmonary edema on ultrasound, a diagnosis of COPD exacerbation was made. She was treated with bronchodilators, steroids, and magnesium and continued to improve. While BNP on admission was 1679, an echocardiogram showed a normal ejection fraction with mild diastolic dysfunction.

BNP values offer little to emergency physicians. There is virtually no benefit in patients in whom a diagnosis of CHF is certain or in whom CHF is improbable. In patients with an intermediate probability of having an acute CHF exacerbation, BNP can aid in diagnosis; however, with the availability of adjuncts such as ultrasound, the utility of BNP is questionable.1