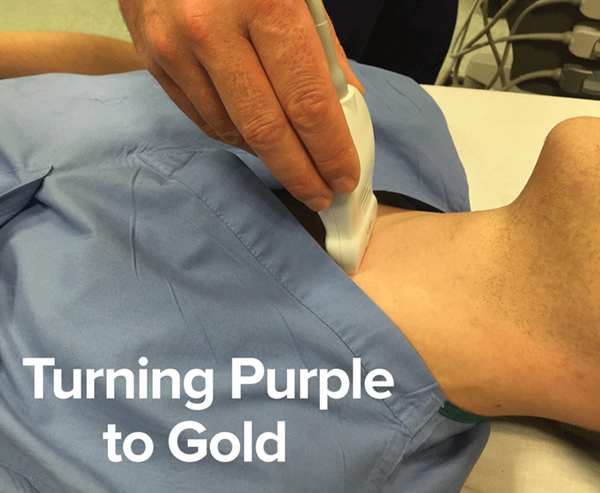 Confirmation of Endotracheal Intubation with Bedside US

A 45-year-old female is brought into your emergency department after cardiac arrest. A quick history from her husband reveals they recently returned from vacation in Australia. Her only medication is an oral contraceptive. Your team goes to work, taking over chest compressions and exposing the patient while you focus on management of the airway. You look down at the patient and notice a profoundly edematous right lower extremity. You are immediately concerned that the cause of her cardiac arrest may be a massive pulmonary embolism. You prepare to intubate the patient by gathering your supplies, which includes capnography. Then you remember that capnography is less reliable in the setting of poor pulmonary blood flow, as in cases of massive pulmonary embolism or cardiac arrest.1 How are you going to quickly ensure proper endotracheal tube placement? Have you considered ultrasonography?

Endotracheal intubation is necessary for definitive airway control during resuscitation of the critically ill patient. Unrecognized misplacement of the endotracheal tube can lead to devastating, avoidable morbidity and mortality. Real-time tracheal ultrasound allows for the dynamic observation of tube passage through the trachea or the esophagus, providing immediate confirmation of placement prior to any ventilation attempts. This can be particularly helpful in situations in which capnography may not be reliable, or in training settings, allowing the supervising physician to watch as the tube passes into place.

Because endotracheal intubation is a two-handed procedure, using ultrasonography requires a second provider to act as sonographer. The sonographer is placed at the patient's right side, selects the high-frequency (6.0-12.0 MHz) linear probe and sets the ultrasound machine to a superficial setting. The probe is placed midline on the patient's neck in the transverse orientation, anywhere between the cricoid membrane and suprasternal notch (Figure 1). Most often, the procedure is performed with the probe just above the suprasternal notch. If the probe is in a more superior position, pressure applied by the sonographer may displace the trachea posteriorly and could potentially make intubation more difficult. Alternately, the sonographer could intentionally use the probe to provide BURP (Backwards-Upwards-Rightwards Pressure) to assist in obtaining a superior view at the discretion of the intubator.

Prior to the intubation attempt, it is helpful to familiarize yourself with the important landmarks of the patient's neck, including subcutaneous tissue, thyroid tissue, and the rings of tracheal cartilage. The tracheal rings are hypoechoic, or dark. Just deep to the cartilage ring, the air-mucosal interface can be seen as a thin, hyperechoic line. Posterior to this line, the trachea is air-filled and does not transmit ultrasound waves; therefore, it appears as a dark area and the posterior structures of the airway are not visible (Figure 2). The esophagus is usually situated just posterior and to the left of the trachea. As it is usually collapsed, it is often not identified unless esophageal intubation takes place.

During intubation, the sonographer can watch as the tube passes into the trachea. Motion, similar to lung sliding, will be visible just posterior to the tracheal cartilage during intubation. This is seen as an area of increased echogenicity (Figure 3). Additionally, the sonographer should watch for the appearance of a second air-mucosal interface adjacent to the trachea, which would indicate passage of the endotracheal tube into the esophagus (Figure 4). If no second air-mucosal interface is appreciated, the tube has been correctly placed in the trachea. By performing this exam as intubation proceeds, esophageal intubation can be immediately identified prior to insufflation of the stomach.2,3

Figure 3. Image of endotracheal tube within the trachea. Note the absence of a second air-mucosal interface (hyperechoic line) adjacent to the trachea.

In recent years, two systematic reviews/meta-analyses have been performed to evaluate the use of ultrasonography for confirmation of endotracheal tube placement. The first, by Chou et al. in Resuscitation, evaluated 12 studies, including those that used lung ultrasound in addition to the tracheal ultrasound technique described here. When analyzing tracheal ultrasonography alone, the study found a sensitivity of 0.92 (95% CI: 0.84-0.97) and specificity of 0.97 (95% CI: 0.95-0.98).4

One potential limitation of ultrasound is that it does not distinguish tracheal intubation from right mainstem intubation. Adding an examination for bilateral lung sliding could be useful for determining the location of the endotracheal tube within the airway. Additionally, obtaining images of the diaphragm in the right and left upper quadrants allows visualization of diaphragmatic movement and can further confirm correct tube placement.

A common concern with the use of bedside ultrasound is that it is operator dependent, in contrast to methods such as capnography that have no dependence on operator skill. One study found that after a brief online tutorial and only 2 practice sessions, emergency physicians were able to quickly identify both endotracheal and esophageal intubations with a sensitivity of 98.3% (95% CI: 96.3-99.4%) and specificity of 100% (95% CI: 98.9-100%). Furthermore, images were interpreted within an average of 4 seconds of intubation – faster than a capnography device can be attached to a tube and ventilations delivered.6

Ultrasound is a rapid, non-invasive means of confirming proper placement of an endotracheal tube. When used in conjunction with traditional methods such as auscultation and capnography, it can improve patient care and avoid the disastrous consequences of unidentified missed endotracheal intubation. Consider adding this technique to your arsenal the next time you intubate.