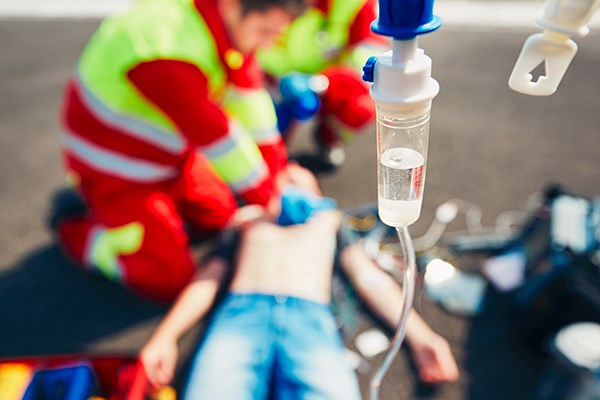 To evaluate the effectiveness of epinephrine, compared with control treatments, on survival at admission, ROSC, survival to discharge, and survival with a favorable neurologic outcome in patients with an out-of-hospital cardiac arrest (OHCA).

The PARAMEDIC-2 trial was released in 2018 and caused a lot of discussion surrounding our go-to medication for resuscitation: epinephrine. The PARAMEDIC-2 trial was a large, multicentered, double-blinded RCT comparing epinephrine versus placebo (patients received 1 mg epinephrine or placebo every 3-5 minutes during resuscitation). 8,000 patients were included, the study was well run, and yet the results showed no difference in good neurologic outcome for patients receiving epinephrine. As has already been well documented and was consistent in the PARAMEDIC-2 trial, epinephrine, as dosed using ACLS protocol, increases rate of ROSC, survival to hospital admission, and survival to hospital discharge. However, what was interesting about the PARAMEDIC-2 trial, was the increased survival rate (of only 0.8%) consisted of significantly more patients with severe neurologic disability (31%) with minimal hope of recovery compared to only 17% of the survivors in the placebo group with devastating neurologic disability. This then launched a series of conversations on ethical questions about whether epinephrine actually increases meaningful survival and conversations about if epinephrine should be dosed differently (titrated to physiologic endpoint, given in drip form, etc.).

This review article was trying to take another look at the impact of epinephrine, especially its impact on meaningful neurologic survival, to see if the debates launched by the PARAMEDIC-2 trial were justified.

Systemic review of randomized controlled trials on adult patients with OHCA treated with epinephrine versus controls.

There are a few take-aways from this study. First, adding vasopressin to epinephrine really has no tangible benefit in survival of OHCA. I think this study helps put that line of thinking to rest.

Second, high-dose epinephrine, which for the purposes of this review was any RCT using > 1 mg epinephrine, needs to be studied further. It statistically significantly increased the rates of survival compared to SDE so may potentially show some promise as further RCT examining different rates of dosing are explored.

What was hard with the results of the PARAMEDIC-2 trial was that rate of increase of survival with epinephrine compared to placebo was relatively low (0.8%), while the percentage of patients with severe neurologic disability was much higher in the epinephrine group. This study, though similar to the PARAMEDIC-2 trial in its lack of significance in this realm, has slightly more reassuring raw values. Interestingly, the difference in survival rate between the epinephrine group and the placebo group remained small: 1% (3.9% of patients receiving SDE survived to hospital discharge compared to 2.9% receiving placebo). However, regarding neurologic outcomes, while not a statistically significant difference, patients receiving SDE did have numerically better rates of good neurologic outcome compared to placebo, and the CI was just barely crossed 1 (0.94, 1.54). This was improved from the PARAMEDIC-2 trail. While we are not able to say that our standard dosing of epinephrine improves survival with good neurologic outcome, and the ideal dosing of epinephrine may need further study, this paper provides more reassuring raw numbers regarding the outcomes with standard-dose epinephrine.