A 57-year-old male with unknown past medical history becomes unresponsive as witnessed by bystanders. He is found to be in PEA on arrival to the emergency department with ACLS in progress. Does the presence of cardiac activity on bedside ultrasound during ACLS correlate with improved survival of this patient?

Background
Of approximately 300,000 out-of-hospital cardiac arrests (OHCAs) annually in the U.S., more than 78% are transported to the ED. Fewer than 8% of all OHCAs survive to hospital discharge. Factors associated with survival include the presence of shockable cardiac rhythm and early defibrillation, availability of bystander CPR and ROSC in the field. POCUS can provide immediate information on cardiac activity as well as potentially identifying rapidly reversible causes of cardiac arrest such as pericardial effusion and pneumothorax. However, no large studies have been performed to explore the role of POCUS in guiding ACLS. The study is sought to determine the association between sonographically visible cardiac activity and survival for patients with PEA or asystole.

Inclusion criteria: non-traumatic cardiac arrest in asystole or PEA and had US imaging performed during their resuscitation

Agreement between initial US interpretation and review was substantial (Îº=0.63)

Conclusion
The presence of cardiac activity on the initial POCUS during resuscitation is the variable most associated with survival following cardiac arrest. ROSC rate was found to be over 50% if cardiac activity was detected compared to 14.1% if no cardiac activity detected. Additionally, POCUS may increase survival in OHCAs by identifying cases where non-ACLS interventions (pericardiocentesis, thrombolysis) are necessary. 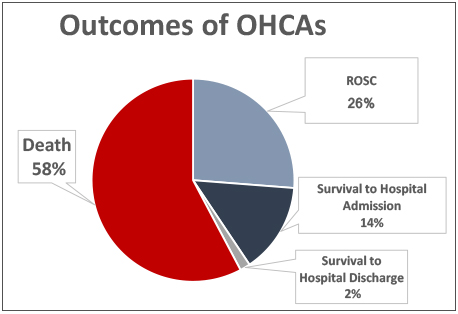 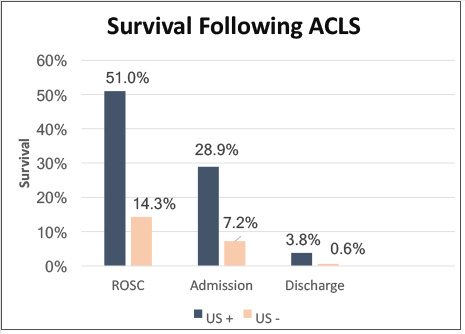 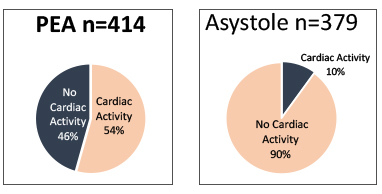