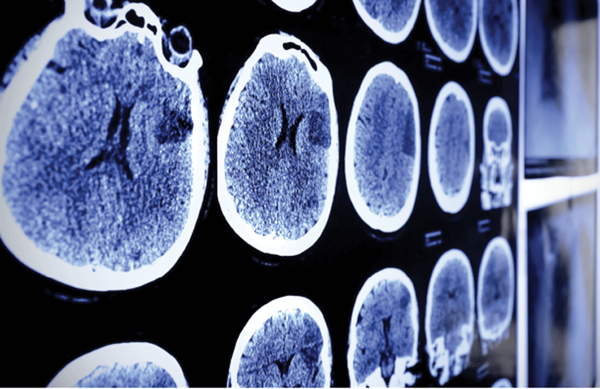 At a rural acute stroke-ready hospital in the year 2030, you are using a tele-stroke tablet to evaluate a 62-year-old male en route by mobile computed tomography (CT) ambulance. The man's wife says he complained of left-sided weakness for the past 2 hours. A computer downloads the 20 non-contrast head CT images transmitted from the ambulance, but some of them are blurry. “Again?” the radiology tech exclaims. “These budget cuts are killing us. In the city they have ambulances that give you 300 high-definition images, in half the time!” Via the tele-stroke tablet, you find that the patient has an NIH stroke scale score of 8. The patient's vital signs, ECG, PT-INR, and glucose are within normal limits, and a “GFAP” is below the threshold for thrombolysis exclusion. You wonder if you missed a bleed in the blurry CT images. The ambulance is 10 minutes away, and the nearest primary stroke center is 1 hour away by air. The paramedic in the ambulance speaks. “We have tPA ready. Should we administer before arrival?”

Stroke is the fifth leading cause of death in the United States, accumulating health care costs of up to $33.6 billion each year.1,2 Eighty-seven percent of strokes are ischemic in etiology, and thrombolysis with intravenous tissue-type plasminogen activating factor (tPA) is the only FDA approved treatment for acute ischemic stroke.2 An estimated 1.9 million neurons are lost every minute that treatment is delayed, and the American Heart Association/American Stroke Association (AHA/ASA) recommends tPA administration within 3 to 4.5 hours of symptom onset and within 1 hour of hospital arrival.3-6 The gold standard for stroke diagnosis is head CT, and an initial non-contrast CT is essential to exclude hemorrhagic stroke or intracerebral hemorrhage, a major contraindication to tPA administration. Per AHA/ASA acute ischemic stroke treatment recommendations, providers have a 1-hour “door-to-needle” time between hospital arrival, CT imaging and review, and tPA administration.6

Access also contributes to delayed tPA administration. Some studies found that less than 20 to 60% of stroke patients access a hospital within 3.5 hours of symptom onset, and in 2010, 55.4% of the United States population lived at least 1 hour away from hospitals with stroke treatment capabilities.9-11

Additionally, the Joint Commission accredits Primary Stroke Centers, or hospitals with adequate resources and protocols for stroke management as defined by AHA/ASA.13

Scientific and technological advances in the past 20 years have revealed the following new ways to improve early stroke recognition and management.

Telemedicine has advanced significantly over the past decade, broadening regional access to quality stroke management. Cellular connectivity with fourth generation long-term evolution (4G LTE) broadband has expanded the ability of neurologists to assess stroke patients more reliably via mobile devices like tablets.14,15 Most recently, in a study of 259 consecutive stroke patients evaluated by tele-stroke providers, the mean door-to-needle time was 42.2 minutes.16 The Joint Commission claims that tele-stroke networks are the best option for stroke management in rural areas, and in 2015 created a new certification for “Acute Stroke-Ready Hospitals” with tele-stroke provider access and tPA administration capabilities, among other requirements.17-19

In Germany and the United States, researchers have investigated the viability of mobile CT imaging to exclude hemorrhagic stroke in the pre-hospital setting, thereby expediting tPA treatment.

In Berlin, the Prehospital Acute Neurological Treatment and Optimization of Medical Care in Stroke Study (PHANTOM-S) used Stroke Emergency Mobile (STEMO) units. STEMO units are ambulances with a CT scanner, laboratory equipment for point of care testing, paramedics, a radiology technician, and a neurologist. For 200 ischemic stroke patients treated with tPA by STEMO, the mean alarm-to-treatment time was 25 minutes shorter than in the control group (51.8 vs. 76.3 minutes, respectively, P<.001). tPA was used more frequently with STEMO deployment (32.6% vs. 21.1%) yet the risk of developing intracerebral hemorrhage was lower, albeit statistically insignificant.20-21 Overall, they estimated an annual reduction of 18 disabilities and a gain of 29 quality-adjusted life years for acute ischemic stroke patients who were treated with STEMO.

While mobile stroke treatment demonstrates promise for improving early thrombolysis in acute ischemic stroke, there are financial barriers limiting operational feasibility at this time, with annual net costs estimated at about $1.05 million per year.23 One analysis concluded that while the cost-effectiveness of mobile stroke treatment is high, benefit-cost ratios vary based on the travel distance and population density.24 There may be ethical considerations if high costs affect availability, thereby limiting the number of patients who receive care.

In a recent study, median serum levels of GFAP and UCH-L1 were significantly higher in patients with intracerebral hemorrhage compared to healthy control patients and patients with ischemic stroke.28

Rapid stroke evaluation and treatment is already moving from the emergency department into the prehospital realm. Emergency providers will have to be prepared for patients who may have already received imaging and/or treatment prior to arrival. Tele-stroke networks, mobile stroke units, and serum biomarkers are not only the future of emergency medicine, but also perhaps a new standard of care for acute ischemic stroke patients.