Diagnosing the Match: Trends in the Applicant Selection Process

Diagnosis -- “to know between.” It's something we do daily as medical care providers, especially in the emergency department as we are faced with a never-ending stream of undifferentiated patients. Each piece of their histories, along with the clues we uncover with our physical exams, laboratory results, and imaging, help point us in the right direction. However, diagnosis is not simply related to medical disease. Each year, graduating medical students are faced with the difficult task of figuring out which residency programs to apply to and, most importantly, how to rank each of the programs where they have interviewed. But perhaps an even more arduous task lies with the residency programs themselves, which often have to sift through thousands of applications to fill a dozen or so positions each year. As emergency medicine becomes an increasingly competitive specialty, how do programs diagnose — know between — their applicants, and vice versa?

The number of applicants and positions is increasing
In the 2014 NRMP Match, there were 1,786 positions offered by 170 residency programs for PGY-1 spots in emergency medicine — a number that has steadily increased from 1,472 positions offered by 141 residency programs in 2009 (prior to 2012, there were also PGY-2 starting positions in EM that were not accounted for in this data). The number of U.S. senior medical students and the total number of applicants appears to have roughly paralleled this increase (Figure 1).

As displayed in Figure 2, the majority of NRMP EM Match positions have consistently been filled by U.S. (MD) seniors — roughly 75-80% in the past six years. However, there still appears to be room for osteopathic students and a handful of U.S. graduates (non-4th year) and U.S. citizen international medical graduates (U.S. IMGs). Opportunities are fewer for non-U.S. IMGs. Additionally, over the past six years, there has been an average of only 8.5 positions per year that weren't matched, including 2012, a year in which there were no unmatched spots. 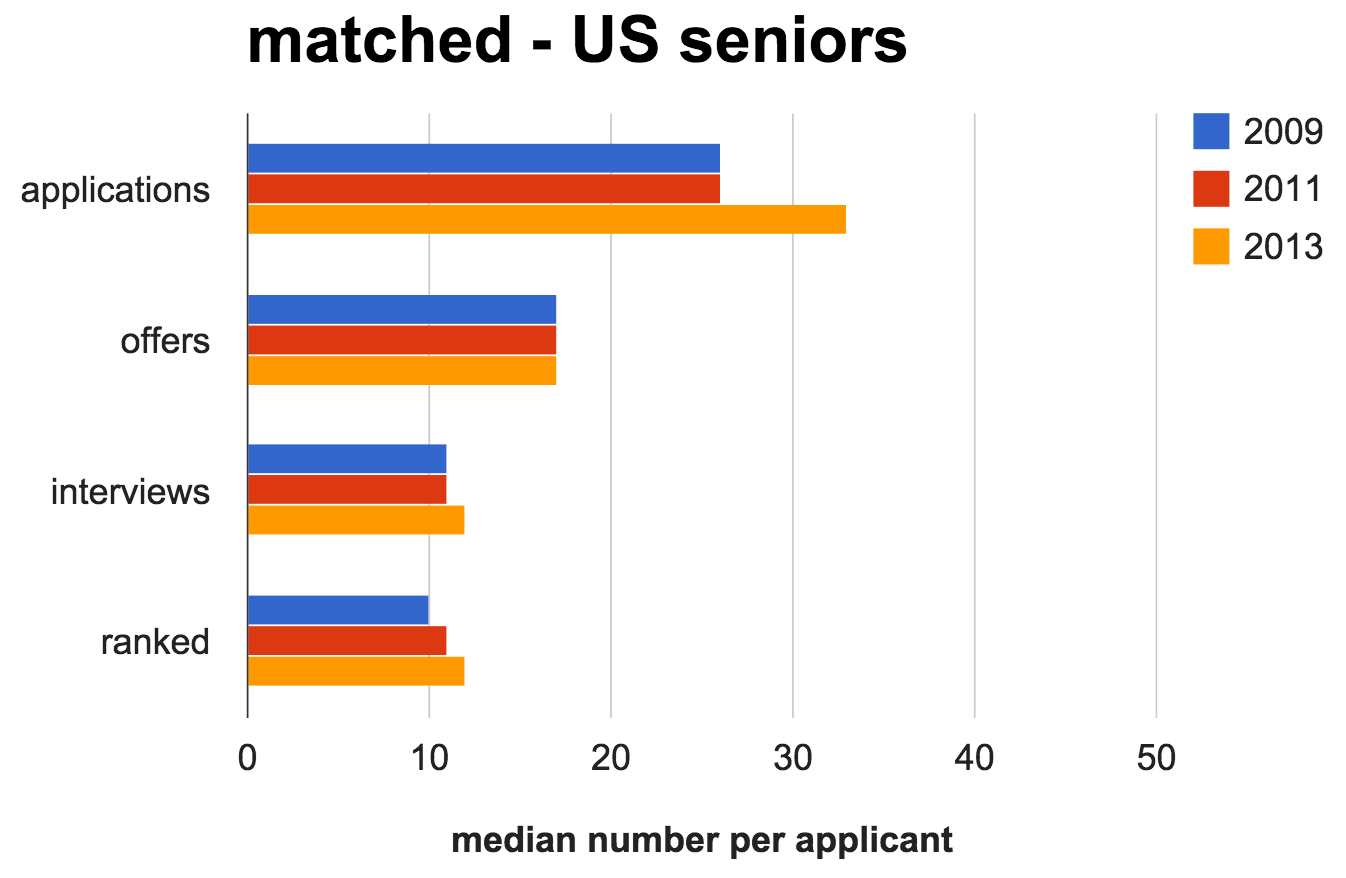 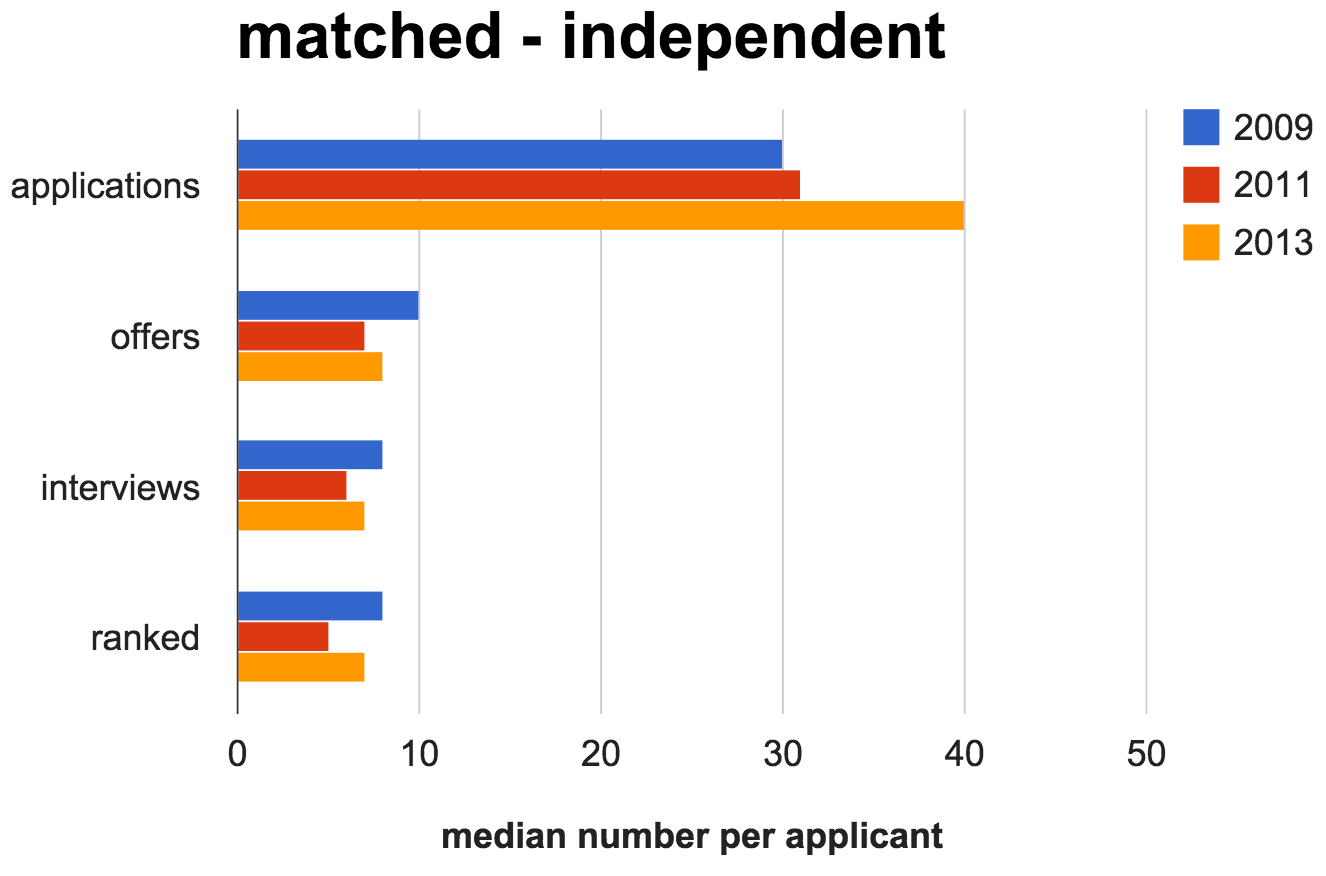 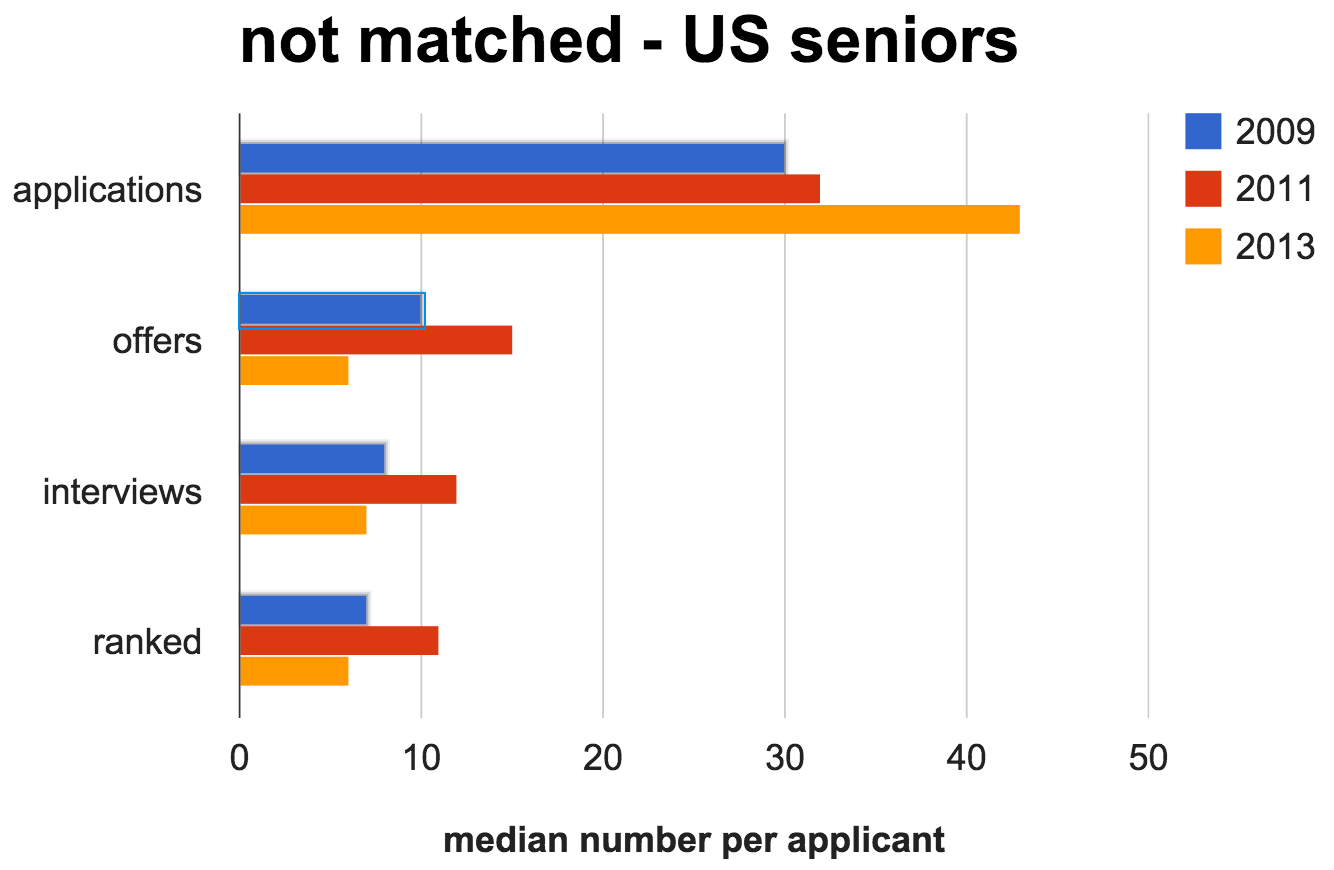 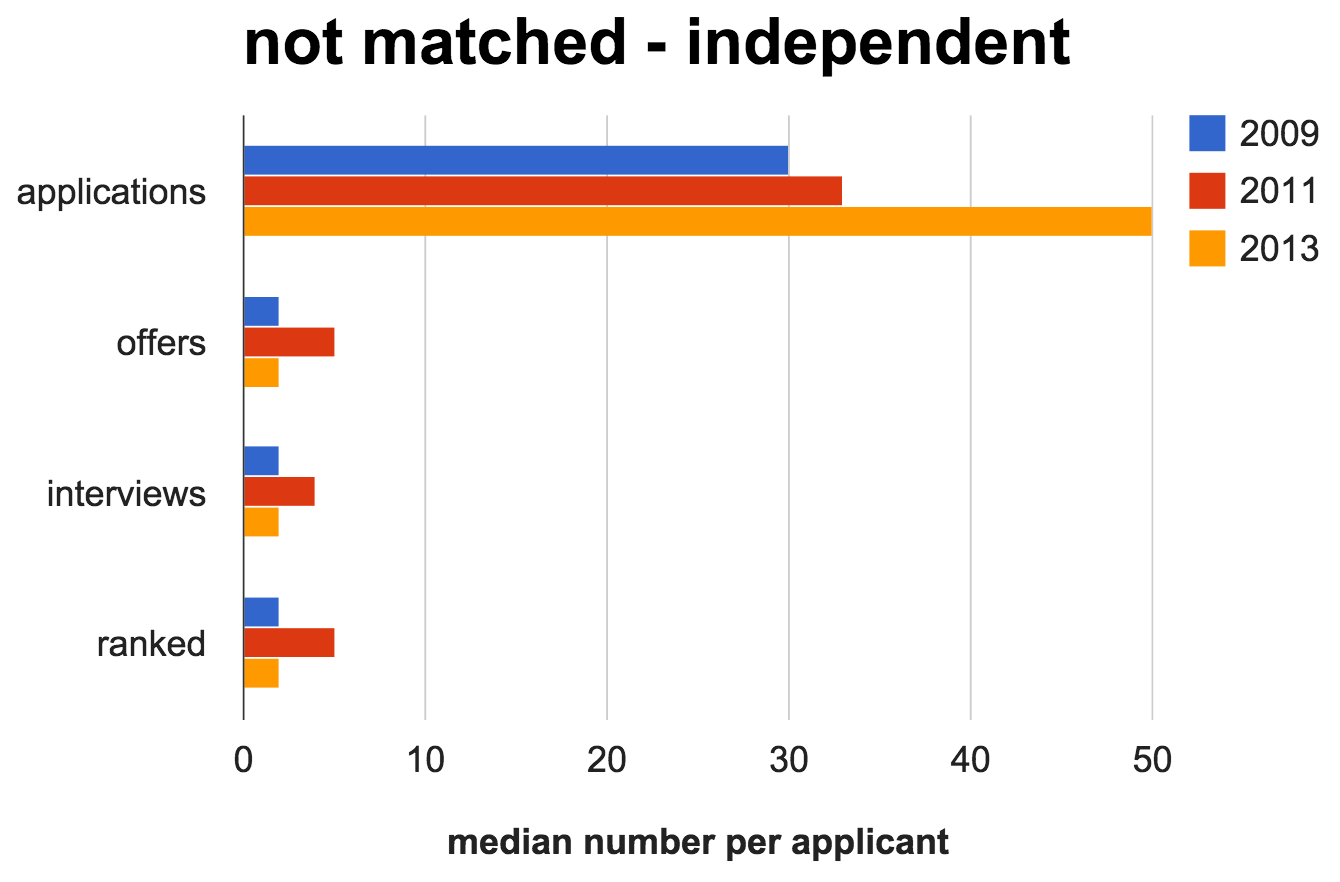 Figure 4. Trend in the ratio of the median number of applications per single interview offer by match status and applicant type. (+) = matched, (-) = unmatched.

The magic number is twelve
According to the NRMP's 2014 “Charting Outcomes in the Match” report,1 regardless of the number of applications you submit and interview offers you receive, what really determines your chances of matching is the number of programs that you rank after interview season. For U.S. seniors, ranking 12 programs is associated with a 99% chance of matching (ranking 7 programs gives you a 90% chance). Each interview completed and ranked after that does not increase your chances of matching (unless you are in a couples Match).

Program directors respond
At the 2014 Council of Residency Directors in Emergency Medicine (CORD; www.cordem.org) Academic Assembly, Drs. Diane Rimple and Michael Van Meter from the University of New Mexico Emergency Medicine Residency presented some enlightening survey data collected from faculty in residency program leadership positions. This shed some light on how each program is dealing with this unprecedented increase in the number of applications they are receiving.

Figure 5. Relative frequency of filter type by the 55% of programs that report using automatic filters.

While most would not be surprised by the filters above, osteopathic students and IMGs will see that the matched numbers of these applicant types have been relatively stable. The programs not filtering are the ones that give them serious consideration (see Figure 6).

Figure 6. Number of matches by non-US seniors each year by applicant type. The non-US IMG category also includes a very small number (2-3) of Canadian and Fifth Pathway applicants each year.

The potential dangers of automatic filters
Screening might be efficient, but the filters used by each program are highly variable and can easily lead to arbitrary exclusion of otherwise competitive candidates. When we fail to recognize that applicants are more than the sum of their grades, the potential for collateral damage is real. Each program is looking for different qualities in their applicants. Even within the same program each member of the residency leadership can have different versions of the ideal candidate. And most also have their own ideas of what a “diamond in the rough” looks like as well.

For example, an otherwise “perfect” candidate, with great SLOEs and a 250 U.S. MLE Step 2 score, would not have their application reviewed by as many as 40% of programs if their Step 1 score was less than 210. This seems crazy. And it is. A Step 1 score may, or may not, end up being very important to program directors in creating their final rank list, but it is an easy, objective thing that can be screened to make the number of applications to review more manageable.

Assessing the situation
Roughly the same number of students are applying for the same number of positions. Opportunities remain for both MD seniors and independent applicants. The number of applications per student has gone up without a rise in the number of interviews offered. However, the majority of students already had more interviews than they actually needed once the whole process shook out. Programs are getting more applications and some are compensating by using automatic filters to screen applicants. This practice appears to have led to a smaller subset of applicants getting the majority of the early interview offers. The rest of the applicant pool are worried they won't get enough interviews. What can be done at this point?

What an applicant can do now
At this stage there is little you can change about your application and interviews are in full swing. If you find yourself in the group without enough interview offers there are still things that you can do.

Lessons for next year: Apply strategically to avoid a competitiveness mismatch
The programs that use the most filters are likely those that get the most applications. From an applicant's perspective, this is probably the most important measure of a program's competitiveness. Gauging your own competitiveness can be difficult, even with the help of an experienced advisor. This is because programs have a huge variability in what they are looking for in an applicant. You may be the ideal “fit” for one program while getting no consideration from another. You can probably also make some educated guesses as to which programs get the most applications ”“ but these are still guesses. You are far better off applying to a diverse group of programs, in case your assessments of them or their assessment of you is off.

According to survey data collected by Rimple and Van Meter (2014), 55% of EM faculty have advised a qualified student who did not match into EM, but on the flipside 88% also report advising marginal students who successfully matched. The common reason for both? Strategic applying, or — in the case of the unmatched and qualified student — not applying strategically. Only 53% of students “ranked a mix of both competitive and less competitive programs.” Having both types of programs on your list will increase your likelihood of matching. Apply smarter; not harder.