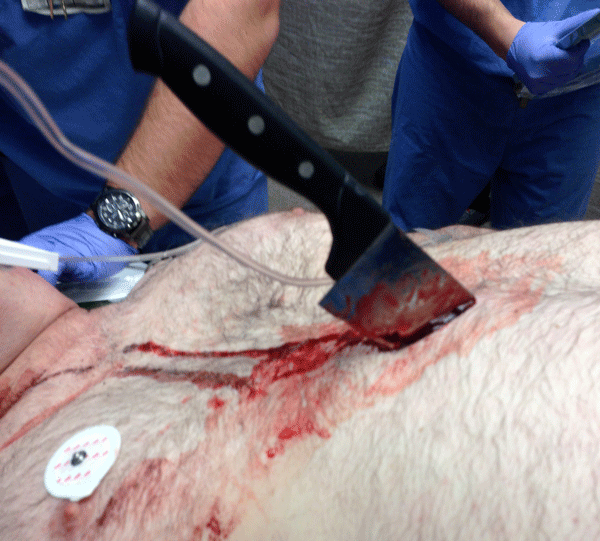 Does TXA MATTER When Your Patients CRASH?

A Summary of 2 Seminal Studies of Tranexamic Acid in Trauma

The past decade has ushered in significant advances in the care of patients with traumatic injuries due, in part, to a war that continues to smolder in the Middle East. Among these are extensive innovations in hemostatic dressings and the reinvigoration of the tourniquet as a viable first-line option for severe hemorrhage in the prehospital setting. On the cutting edge of EMS trauma management is the rediscovery of a drug that has existed for decades: tranexamic acid (TXA). Despite first approval in 1986 as an antifibrinolytic, and subsequent approval for cyclic heavy menstrual bleeding (as Lysteda, an oral medication, in 2009), and dental hemorrhage in hemophiliacs (as Cyklokapron, an injectable or topical medication), it continues to be investigated as an adjunct for reducing intraoperative hemorrhage and improving trauma outcomes. Level I evidence in the form of double-blinded placebo-controlled trials supports the use of tranexamic acid in these FDA-approved instances. When used for heavy menstrual bleeding, oral TXA has been tolerated well, and has been associated with significant improvements in both menstrual blood loss and health-related quality of life.1,2 Likewise, when used in hemophiliacs undergoing dental procedures, TXA was found to improve control of gingival hemorrhage.3 Considering the safety and efficacy demonstrated in these instances, it seems reasonable that the drug's utility could be extrapolated towards trauma.

In contemporary literature, the most talked-about trials regarding the use of TXA in trauma patients include the CRASH-2 trial and the MATTERs study.

CRASH-2 (Clinical Randomisation of an Antifibrinolytic in Significant Haemorrhage-2)

Published in 2010 in The Lancet, the CRASH-2 trial4,5 (Table 1) aimed to determine the effect of the early administration of TXA on death, vascular occlusive events, and blood transfusion requirements in bleeding trauma patients. Primary outcome data were available for 20,127 (99.6%) of the randomized patients. 99.1% of patients were known to have completed the loading dose and 94.2% of patients completed the maintenance dose.

All-cause mortality was significantly reduced with TXA; relative risk of death was 0.91 (p=0.0035). Deaths from multiorgan failure, head injury, or other causes did not significantly differ between treatment groups. Vascular occlusive events (fatal or non-fatal) did not differ significantly (TXA 1.7%; Placebo 2.0%). Mortality differences between geographic regions of the test sites were not found to be statistically different (Î§2=1.445; p=0.70).

Table 2. Results of CRASH-2 trial
(Relative risk (RR) of bleeding mortality with TXA. Benefit is greatest when TXA is administered within the first hour of injury.)

Published in 2012 in Archives of Surgery, the MATTERs trial6 (Table 3) aimed to characterize contemporary use of TXA in combat injury and to assess the effect of its administration on total blood product use, thromboembolic complications, and mortality. While the UK Defence Medical Service has used TXA since 2009 as part of a massive transfusion protocol, the US Combat Casualty Care program had previously deferred its use altogether.

Of the 896 patients with a combat injury requiring transfusion, 32.7% received IV TXA within one hour of the injury. Statistically significant reduction in 48-hour (p=.004) and in-hospital mortality (p = .03), but not 24-hour mortality, was found with TXA administration. In the massive transfusion group, this correlation was even stronger (48-hour mortality p=.003; in-hospital mortality p=.004). At 30-days, survival in the TXA group was also better than the no-TXA group (p=.006). In the massive transfusion group, this relationship persisted with even greater absolute risk reductions (p=.004) (Table 4).

The percentage of patients with hypocoagulopathy on admission to the ICU following TXA administration was reduced as compared to no-TXA in both the overall cohort and massive transfusion subgroup (p<.05). The combination of this finding along with the highest mortality benefits observed after 48 hours suggests that TXA likely functions not only as an antifibrinolytic, but perhaps also as an anti-inflammatory, due to its non-immediate effects.

What does this mean for the use of TXA in the prehospital setting?

These studies have appreciable shortcomings, but it is generally agreed that their primary outcomes hold internal validity. Additionally, while the generalizability of these studies may be contended, the data remains compelling. In short, the following conclusions can be drawn from these two trials.

CRASH-2 demonstrated a reduction in all-cause mortality, but especially in death due to bleeding. When considering the impact of TXA, the greatest benefits were associated with early administration of the drug (< 1 hour). Vascular occlusive events did not differ in incidence between treatment and control groups.4,5 In this trial, the number needed to treat (NNT) with TXA was 67 patients.

MATTERs also revealed a reduction in all-cause mortality past 48 hours in patients receiving TXA. The greatest benefit from TXA was identified in patients with severe injuries requiring massive transfusion.6 In this study, with patients of a reportedly higher acuity than the CRASH-2 trial, the NNT was 7.

Taken in concert, these findings suggest that the greatest benefit of this drug might be in its use as an adjunct for severely injured and bleeding patients, especially when administered early. As EMTs and paramedics are frequently the first healthcare providers to make contact with civilian trauma patients, the use of TXA may have a reasonable niche in the world of EMS.

While these studies have failed to demonstrate an increased risk of thromboembolic events, both have limitations to this data. Consequently, a reasonable approach to implementation of TXA might include an assessment of a patient's thrombotic risk factors.

At this time, TXA has become a Class I recommendation in the U.S. military's Tactical Combat Casualty Care guidelines,7 indicating that there is evidence (currently Level B) and/or general agreement that a given procedure or treatment is useful and effective. Additionally, multiple EMS agencies in the U.S. have begun to implement TXA in their treatment protocols.

As trauma management continues to evolve, the role of TXA may yet blossom. Ongoing surveillance of trauma outcomes by EMS systems employing this medication will be integral in defining the role that TXA should or should not play in the future of prehospital trauma care.