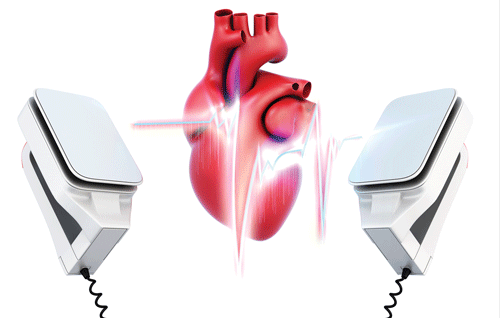 Proposed theories as to why DD may be efficacious include the delivery of more energy to overcome the defibrillation threshold as well as the addition of another defibrillation vector.

A 44-year-old male with no past medical history collapses at home in front of his son, who calls 911 and begins CPR. When EMS arrives, they find the patient in ventricular fibrillation (VF). They deliver seven single biphasic defibrillations, two doses of amiodarone, and one dose of epinephrine per Advanced Cardiac Life Support (ACLS) recommendations.

Upon arrival to the emergency department (ED), the patient remains in VF. After another single biphasic defibrillation, he is given lidocaine, magnesium, calcium gluconate, and sodium bicarbonate. An additional defibrillator is acquired, with plans to perform dual defibrillation (DD).

An additional anterior-posterior set of defibrillation pads are added to the traditional anterior-lateral set (Figure 1), and he is shocked near-simultaneously from both pads at 200J. The patient achieves return of spontaneous circulation (ROSC) after 45 minutes of downtime. An electrocardiogram reveals atrial fibrillation with evidence of ST-elevation myocardial infarction.

The patient is then transferred to the catheterization lab where a 100% occlusion of the right coronary artery is found and stented.

There is great variation in the way DD is performed. However, two sets of defibrillator pads are usually placed in the anterior-lateral and anterior-posterior positions.2-5 Both defibrillators are charged to either 200J or maximum energy, and the patient is shocked simultaneously from both defibrillators.2-4

Proposed theories as to why DD may be efficacious include the delivery of more energy to overcome the defibrillation threshold as well as the addition of another defibrillation vector which may overcome poor pad placement or thoracic impedance from, for instance, pulmonary edema or hyper-inflated lungs.3

Although DD has long been a procedure employed by electrophysiologists to cardiovert iatrogenic RVF in the electrophysiology lab, use of this technique for out-of-hospital cardiac arrest (OHCA) with RVF is a relatively new concept.6

Several case reports and small case series have been published on DD for OHCA, with reports of ROSC as high as 57.1% and neurologically intact survival to discharge as high as 28.6%.3-5,7-9 Nevertheless, a recent retrospective study of 279 OHCAs who had RVF after three 200J single biphasic defibrillations did not find a benefit. They compared the 50 who got DD after the initial three shocks, to the 229 who were treated with repeated single biphasic defibrillations and found no difference in neurologically intact survival, ROSC, survival to hospital admission, or survival to hospital discharge.2

This lack of difference may be explained by the reality that although the chance of successful cardioversion decreases with subsequent shocks in patients with RVF in OHCA, the total proportion of patients having been successfully cardioverted increases with each subsequent shock.10,11 However, as with most retrospective studies, there are many confounding variables including a lack of control for pertinent Utstein variables such as witnessed arrest or bystander CPR, CPR quality data, timing of DD, and pertinent post-arrest care such as hypothermia.

RVF is rare, potentially as low as 0.9% of OHCAs with attempted resuscitation; however, greater awareness of the condition as well as new proposed therapies, such as DD and intravenous esmolol, will likely prompt larger, better quality studies.3,12,13 Because few therapies exist for RVF and since mortality is as high as 97%, it is reasonable to attempt DD for RVF in OHCA despite the significant lack of literature. Although potentially beneficial, DD should not hinder timely defibrillations and good quality chest compressions. 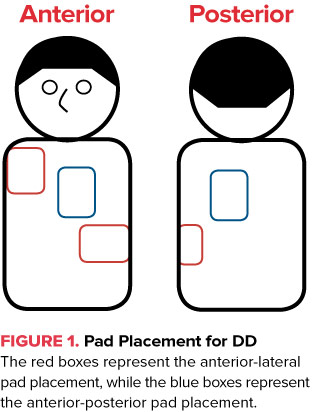 The hypothermic protocol was initiated when the patient arrived to the ICU from the catheterization lab. Over the next two days, the patient struggled with cardiogenic shock secondary to right ventricular failure, as well as disseminated intravascular coagulation. An Impella ® percutaneous ventricular assist device was placed due to persistent cardiogenic shock, but clinically, the patient had severe anoxic brain injury. Therefore, the decision was made with family to continue comfort measures, but withdraw life-sustaining care.