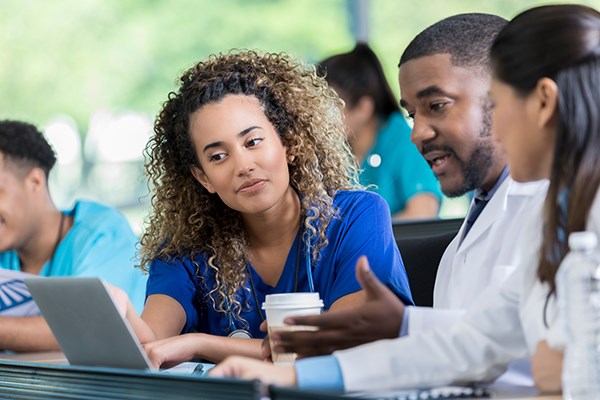 Graduate medical education (GME) funding does not get the same news coverage as other topics in health care, but that doesn’t make it any less important.

GME has a long and storied history in our country and has consistently been a top priority of many physician representation groups including the American Medical Association, American Osteopathic Association, American Academy of Medical Colleges, and many more. As young physicians, we should not only strive to learn about GME but also be its main advocates.

What Is GME and How Is It Funded?
GME encompasses all the training medical students receive after graduation in order to be a practicing physician. In simple terms, GME means residency and fellowship. This is an easy distinction for us to make but, to the general public, this is often a point of confusion.

GME is funded by multiple mechanisms, including federal, state, and private entities, with the federal government being by far the largest contributor to GME funding. The mechanism by which federal funds flow is through Direct GME (DGME) and Indirect Medical Education (IME). Both DGME and IME payments are controlled by Medicare, which means the Centers for Medicare and Medicaid Services (CMS) essentially controls GME funding.

DGME helps to pay for direct teaching costs (eg, resident salaries and benefits, faculty). IME funds are more nuanced. This funding covers teaching hospital compensation, additional residency support staff, updated technology, and handling a population that tends to be sicker and of lower socioeconomic status. For example, a typical teaching hospital will have a trauma unit and/or Neonatal Intensive Care Unit. These units generally lose money for the hospital since they are so specialized. However, these serve a vulnerable population and are valuable learning experiences during residency training, so CMS supports these specialty units with IME payments.1,2 The amount of IME paid out is tied to the hospital’s Medicare population served and to the size of a residency program. The amount of IME has been more than double the cost of DGME in recent years.3

The History of GME Funding
GME funding has a long history that goes back to the early 1900s. Back then, training institutions and hospitals paid their own money to train residents. In 1965 when Congress created Medicare, they knew that an increase in health coverage would require a concordant increase in physicians that could not be solely supported by private hospitals. Medicare funds were allocated to help pay for GME until other sources of funding could be identified. A better model was never agreed upon and Medicare has continued to provide GME funding since.

For the next three decades, CMS did their best to fund GME without any strict rules or structure in place. CMS had no spending limits for GME spending, until the Balanced Budget Act of 1997. With that act, Congress capped the number of residents that would be paid for under DGME funding.4 Multiple presidential budgets have come out since then, some asking for increasing GME funding and some asking to limit GME funding. However, no changes have been made to this cap set in 1997.1,2 Medical schools, who do not rely on a limited funding stream, have since increased their matriculation rates which has created a bottle-neck effect that worsens each year.

Why Increased GME Funding Is Needed
The Match becomes more competitive each year, which can be attributed in large part to the limited number of residency positions available. Since the 1970s, the number of students in The Match has surpassed the number PGY-1 positions, a trend that shows no signs of slowing down.5 By increasing funding for GME, we are effectively increasing this PGY-1 position total and ensuring that medical students have the opportunity to continue their training.

Finally, when talking about GME funding it is impossible not to talk about the big looming issue of physician workforce. The United States has a predicted physician shortage of nearly 122,000 by the year 2032, a prediction that has only worsened in past years. This physician shortage is predicted to be exacerbated by our nation's rapidly aging population, both on the supply and demand side. The U.S. Census Bureau predicts the population will grow by more than 10% by 2032, with those over age 65 increasing by 48%, which will greatly increase demand for health care professionals. The supply side of the physician workforce is also expected to worsen, with nearly one-third of practicing doctors turning 65 in the upcoming 10 years.6 Having this physician group retirement coincide with a large increase in health care usage of an aging population is going to be a significant stressor to our already overloaded system. Funding GME means we can produce more doctors and help to solve this problem before it begins.

The Potential Solutions
There have been many bills proposed ever since the 1997 Balanced Budget Act, but most have found it hard to gain traction in Congress. However, many believe we are coming to a tipping point and change is poised to happen soon.

The “Resident Physician Shortage Reduction Act of 2019” (S.348) is a bill that has been discussed among Congressional leadership for multiple years but has recently found new life. This bill, sponsored by Sen. Robert Menendez (D-NJ), would increase GME slots by 15,000 over a 5-year period. This increase is less than what is needed to adequately address the physician shortage but could be a catalyst for increasing residency spots, which have been stagnant for more than two decades.

The “Community and Public Health Programs Extension Act of 2019” (S.192) coming from Senator Lamar Alexander (R-TN) is another important bill gaining traction. The bill funds five important programs centered around public health, one of them being the Teaching Health Center Graduate Medical Education (THCGME) Program. This is one of the few opportunities to increase GME funding outside of direct Medicare-supported positions. The THCGME Program currently supports 728 residents and has the added benefit of prioritizing underserved populations7. The bill also further funds the National Health Service Corps (NHSC) which is an important program that allows physician’s unique help with loan repayment if they practice in a physician shortage area.

The pushback that these bills, and many bills proposed in previous cycles, receive is largely due to their high fiscal note. There is an argument that GME funding is currently not proportioned correctly. In 2016, the Medicare Payment Advisory Commission (MedPAC) found that IME payments may be overestimating the indirect costs of residency training. By their estimates, IME expenditures should only be approximately 1/3 of their current amounts.8 A solution that has been proposed several times is that funds may be spent more responsibly if DGME and IME were merged into one entity. However, this plan disincentivizes hospitals to invest in primary care and may reduce resident compensation.

Lastly, the ACGME has begun to recognize the crucial role that industry funded residency programs may play in the coming years, as continued Medicare funding is not a guarantee. Industries that have become “influential” sources of funding in the past 10 years include pharmaceuticals, medical device, and biotechnology companies. Although the ACGME promotes standards that require training institutions to monitor interactions between corporations and trainees, they cannot guarantee that industry funded programs will not affect clinical decision-making by residents funded under such programs.9  EMRA recently passed a resolution to examine the effects that corporate-sponsored EM residency programs may have on physicians in training.10

How to Help
GME funding is a highly specific topic and is therefore not addressed by many other lobbying organizations. Residents and medical students, as the future of medicine, are some of the few advocates for this issue. Congress and multiple Presidential budgets have put GME on the chopping block in the past and medical advocacy offices across many specialties have had to fight hard to just maintain the current funding that is available. We are a small group advocating on a specific topic so persistence is key.

Fighting for GME funding consistently over a long period of time is the only way. Sending in letters and making phone calls to your representatives, setting up meetings with your members of Congress, and participating in or organizing a GME advocacy event are some ways you can have a strong impact. Sending in letters is a staple of advocacy efforts and has become easier with the use of the internet. By visiting http://savegme.org/content/medical-professionals you can find your representatives and send them prewritten messages on behalf of the AMA.11 The AAMC also has multiple resources on GME funding,12 specifically if you are looking to expand your knowledge on the details of funding, at https://www.aamc.org/advocacy/gme/. Setting up meetings with your representatives and attending national and state advocacy events can make a huge impact on a representative’s decision-making.

GME advocates cannot afford to take the foot off the gas even for a single Congressional cycle. If physicians and students fail to show up and fight for GME funding, then Congress will rightfully assume the issue is not important and can be sacrificed when the next budget season rolls around. Actively advocating for GME funding is the responsibility of all physicians, regardless of where they are in training, so the future of health care and safety of patients is protected.