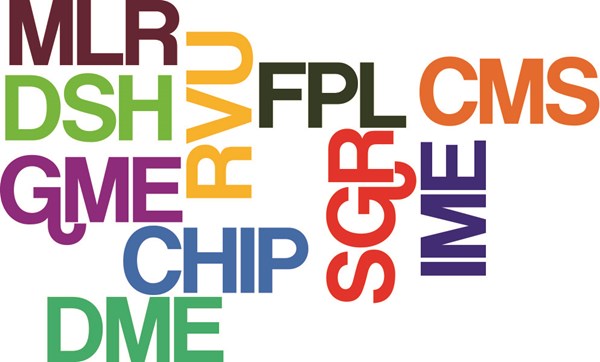 Health policy can be a bit of an alphabet soup, especially when it comes to the way that the government pays for care. Abbreviations abound; ever wonder what all those acronyms mean? Not sure how costs of care are calculated? Read on!

In general, many payment structures and formulas are set by the Centers for Medicare and Medicaid Services (CMS). Private insurance companies use a lot of what the federal government has already established and modify it for their own use.

The main way the government pays for health care is through entitlement programs, which include Medicare, Medicaid, and the Children's Health Insurance Program (CHIP). We are all aware that Medicare pays for the care of patients older than 65, but did you know that Medicare also covers people younger than 65 with ALS, ESRD, or certain other disabilities? Medicaid is a federal – state partnership to care for the indigent, providing health insurance to children, the parents of dependent children, pregnant women, the elderly, and the disabled whose incomes fall below a certain percentage of the federal poverty level (FPL) set by each state. The fact that both Medicare and Medicaid cover seniors means that some people are eligible for both programs, called dual eligibles (not really an abbreviation, but good to know anyway). A third way that the federal government insures patients is through S-CHIP (the State Children's Health Insurance Program) or CHIP. CHIP uses federal and state funds to expand the number of children eligible for government health insurance beyond those covered by Medicaid.

Medicare is also responsible for paying for residency training, often referred to as graduate medical education (GME). CMS doles out these funds in two groups. Direct GME funding (DME) is paid to a hospital for direct support of residency training. This is for things like resident salaries, teaching physicians' salaries, accreditation fees, etc. Indirect GME funding (IME) is a little more nebulous. IME dollars go toward things that make a hospital a great place for residents to train, such as increased care costs related to treating more complex patients, standby capacity in burn and trauma centers, etc. In the current debate to cut GME funding, most of the attention is focused on IME as it represents the majority of GME spending, and the link between IME-funded programs and better resident education is not always clear.

But how do insurance agencies calculate the dollars and cents to pay for each episode of patient care? Medicare has come up with several different methods, which, as mentioned previously, generally get carried over into the private sector as well. One is the diagnosis-related group, or DRG. This is a classification scheme that relates the types of patients a hospital treats to the costs incurred by that hospital. Medicare provides prospective payments to hospitals based on what DRG a patient falls into; reimbursement for treating essentially the same illness can vary widely based on these classifications (this is where our charting becomes really important!). Another payment formula is the relative value unit, or RVU, which defines how Medicare calculates reimbursement for various practitioner services. RVUs are based on the work of the practitioner, expense to the practice, and the cost of malpractice insurance. This system tends to reward procedure-driven specialties much more than primary care specialties, and the RVUs are set with input from the AMA (we're looking at you, Dr. Stack!). A third system is Disproportionate Share Hospital (DSH) payments. These are payments made by the federal side of Medicaid to hospitals that provide a larger-than-average amount of uncompensated care, intended to help these hospitals balance their books so they can continue to serve the uninsured. The Affordable Care Act significantly reduces this; the plan was for the loss in DSH payments to be compensated for by an increase in Medicaid payments for beneficiaries newly eligible under expansion. Since the Supreme Court made Medicaid expansion optional, however, the government is taking a second look at how to help keep safety-net hospitals afloat.

Probably the most famous payment formula is the sustainable growth rate, or SGR. The SGR is a formula intended to determine how payments to physicians should be adjusted to control costs. When instated in the 1990s, it was meant to correct for inflation and ensure that the yearly increase in spending per beneficiary does not exceed the growth in GDP. However, the reality is that medical costs have risen much faster than growth in GDP, and providing reimbursement at SGR-predicted rates would result in huge pay cuts for physicians. Congress has instead been passing a series of laws for more than 10 years to bypass using the SGR, but it is loath to completely repeal it because of the perceived multibillion-dollar cost.

Finally, an acronym specific to the private sector is the MLR, or medical loss ratio. The MLR is the percentage of its premiums that an insurer must spend on health care services for its beneficiaries. The Affordable Care Act set the MLR at 85% for large-group insurers and 80% for small-group insurers (the remaining 15-20% goes to profits and overhead). Insurance companies claim that this restriction, along with all the changes in coverage requirements for their customers, will make it difficult for them to break even.

Understanding health policy can be difficult. Hopefully, with at least a small foundation of the concepts and terminology that are a part of the field will arm you with the knowledge to have informed discussions and understand the broader scope of health policy. It is a topic that affects all of us — not just emergency physicians, but physicians in general, other health care providers, and, most importantly, our patients.

Want to learn more about health policy? Join the EMRA Health Policy Committee or check out our committee's Health Policy Basics for Residents and Medical Students. You can also keep abreast of policy current events by joining the ACEP 911 Network. There are multiple written resources as well, including the for-resident, by-resident Health Care Handbook by Askin and Moore, and EMRA's recently republished Emergency Medicine Advocacy Handbook (Updated to 2019 Edition) Most of all, stay tuned for more policy updates, as the political landscape is always changing!