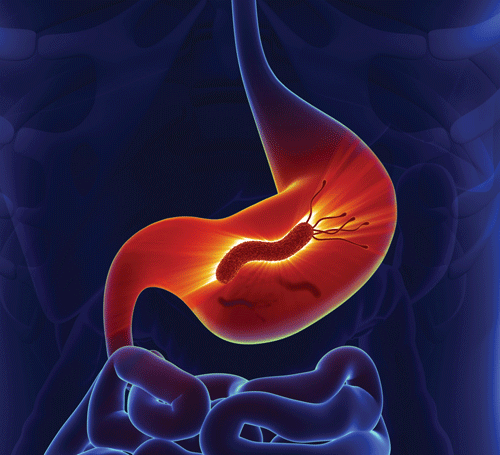 In 1984, Dr. Barry Marshall, an Australian physician, ingested a petri dish known to contain Helicobacter pylori in an attempt to help prove his theory that the bacteria was related to gastric ulcer disease. Within three days, he experienced severe abdominal symptoms, and within eight days, he had EGD-confirmed severe gastritis.1 In 2005, he became a Nobel Laureate for his cutting-edge work. As a result of his self-sacrificing acquiescence, we are now keenly aware of the causality and prevalence of H. pylori in peptic ulcer disease. Each year 20-30% of people experience dyspepsia severe enough to seek medical attention, and evidence supports that H. pylori is detectable in 90-100% of patients with duodenal ulcers, and 60-100% of patients with gastric ulcers.2

Worldwide, H. pylori is estimated to affect more than 4 billion people. In fact, H. pylori prevalence rates have been quoted at greater than 50% across Central America, South America, Asia, and Africa.3 The consequences of chronic infection are not insignificant. H. pylori colonization is directly associated with both gastric and duodenal ulcers, gastric lymphoma and cancer, and GI bleeding. The H. pylori prevalence in the U.S. is estimated to be 32%, with a disproportionate amount affecting lower income African-Americans and whites.4,5

In a prospective cohort of over 80,000 patients in the Southern Community Cohort Study (across 12 states in the Southeast), serum studies were performed indicating that 89% of low-income African-Americans, and 69% of low-income whites were, or had previously been, infected with H. pylori. Overall, the odds of infection among African-Americans compared to whites was 3:5.6 H. pylori infection being associated with race and socioeconomic status has been replicated across several studies. In 2013, Meltzer, et al, studied an urban emergency department population in Washington, D.C., and found the prevalence of active H. pylori infections to be 25%. Additionally, this article demonstrated that age and sex were not risk factors for H. pylori infection, but confirmed that race was an important risk factor. Again, according to this study, African-Americans were significantly more likely to be infected than their white counterparts.7

In the emergency department, many opportunities are lost with regards to care for patients with dyspepsia. The standard outpatient therapy is the oft-used empiric PPI trial. There are many caveats to the rules where, as health care providers, we often achieve the standard of care but fall short of excellence. First, while the diagnosis of dyspepsia does almost always merit a PPI trial, many patients are not appropriately screened for “red flags” or alarming features. The presence of dyspepsia plus an alarm feature (see Table 1) mandates a completely separate diagnostic algorithm: early endoscopy via urgent GI follow up. Second, the American College of Gastroenterology recommends an empiric proton pump inhibitor trial for populations with an H. pylori prevalence <10%, but in populations with a prevalence >10%, a “test and treat” strategy is recommended. Additionally, test and treat has been demonstrated to be cost effective, and eradication is a strategy known to reduce the risk for bad sequelae, including gastric cancer.8,9,10

The prevalence cutoff point of 10% is a key consideration. Test and treat is the recommended approach in these patient populations in the primary care setting, and this can reasonably be applied to the emergency department (i.e. low socioeconomic status, predominantly African-American or immigrant populations).

Testing may be accomplished in a variety of manners, either invasively with endoscopy and biopsy, or noninvasively. Three noninvasive options are typically available: serum testing, stool testing, or C13 urease breath testing. New technology has enabled the C13 urease breath test to have real time results. Some variations on the product have a 20-minute turnaround time. This is a preferable option because of speed of results and the high sensitivity and specificity (upwards of 95%).11 Another available option is the stool antigen test, which yields sensitivities above 90%. This test, however, often requires days for results, and requires that patients stop PPI use for 2-4 weeks prior to testing.12 Both the urease breath test and stool antigen test are indicative of active infection. The third option is H. pylori serology. This option has a sensitivity of approximately 70% and is not necessarily indicative of active infection.10 In general, serology is a poor option as it has lower sensitivity and specificity than the other tests available.

Treatment is accomplished via either triple or quadruple therapy. Triple therapy entails a PPI, clarithromycin, and amoxicillin or metronidazole for 10-14 days. Quadruple therapy adds bismuth and is usually reserved for H. pylori refractory to triple therapy. Both offer eradication rates between 70-90%.13 It is important to note, however, that the treatment is not necessarily benign. These patients often experience severe side effects and will require close outpatient follow up.

H. pylori is more impactful than many of us realize, and as a collective (particularly those of us working with underserved populations), we should have a high index of suspicion for H. pylori infection in any patient presenting with dyspepsia. Minorities, poor socioeconomic status, and immigrants are the highest risk groups. Specifically, those of us providing care to an urban, underserved population need to keep the 2013 Meltzer study in mind, taking careful note of the demonstrated 25% prevalence.

All patients deserve symptom control via a PPI or H2 blocker, but higher risk patients also merit testing. The presence of any alarm features should prompt GI follow up. With regards to antibiotics, there is no significant body of evidence for empiric treatment at this point. Those who test positive for H. pylori should be treated, though treatment without a positive result is not common practice, nor is it generally recommended. While point of care testing is becoming more common, very few emergency departments in the country currently have that capacity. We should familiarize ourselves with the testing options available in our institutions. If these tests are not readily available with real-time results, assuring outpatient follow up with a primary care physician is key, as these patients frequently fall into the test and treat category.