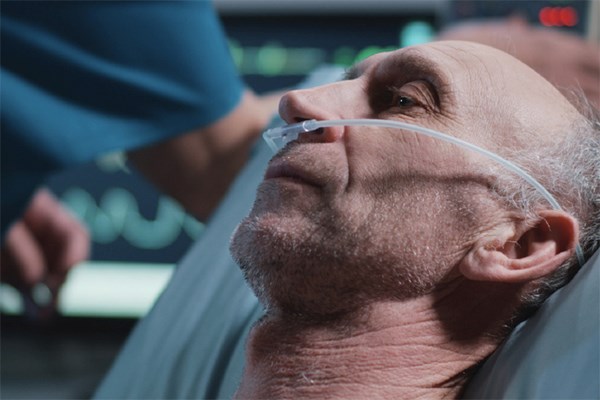 Administering supplemental oxygen to allow treatment of the underlying etiology of respiratory failure is the remedy. An emerging delivery method for supplemental oxygen is high-flow nasal cannula (HFNC). HFNC was patented in 1988 to prevent exercise-induced pulmonary hemorrhage in race horses. Humidified air was delivered at between 60 L/min to 500 L/min to “condition” their pulmonary and cardiovascular systems.1 HFNC was introduced for humans in the mid-1990s and many subsequent studies have demonstrated convincing evidence for the utility of HFNC as an adjunct therapy for respiratory failure.

Clinical Benefits
There are many benefits to administering supplemental oxygen via HFNC. Normal minute ventilation in a 70-kg person is approximately 6 L/min. When a patient is in respiratory distress, however, demand can be between 30-120 L/min.2 Matching this demand with supplemental flow can decrease work of breathing and the sensation of dyspnea. High flow rates have also been shown to decrease anatomic dead space in the nasopharynx and therefore increase oxygen delivery and decrease CO2 rebreathing.3 There may also be some generation of positive pressure. Corely et al. compared pharyngeal pressures with low-flow nasal cannula and HFNC and demonstrated increased mean airway pressure by 3 cm H2O.4 Similarly, Ritchie et al. demonstrated that pharyngeal pressures are proportional to flow, with approximately 5 cm H2O generated at a flow rate of 50 L/min by HFNC.5 In contrast to noninvasive positive pressure ventilation (NIPPV), HFNC allows for expectoration by warming and humidifying mucus. Finally, numerous studies have demonstrated that patients are much more comfortable with the small nasal prongs of HFNC as compared to NIPPV masks.6-9

Hypoxemic Respiratory Failure
In pure hypoxemic respiratory failure, HFNC can improve dyspnea, decrease respiratory rates, and increase oxygen saturation and PaO2.7-9 The landmark FLORALI trial published in New England Journal of Medicine in 2015 randomized approximately 310 hypoxemic patients to HFNC, NIPPV, or nonrebreather in European ICUs.10 The primary outcome, regarding the proportion of patients who were intubated, was no different between groups. Yet, there were lower rates of intubation in a subset of patients with severe hypoxemia, defined as PaO2:FiO2 ≤ 200 mmHg. Also, the secondary outcome demonstrated lower all-cause mortality and more ventilator free days in the HFNC group.  These results were echoed by a systematic review and meta-analysis published in Chest in 2017, which included studies that randomized patients with hypoxemic respiratory failure to HFNC, NIPPV or conventional oxygen therapy. Overall, in this systematic review, there were lower rates of intubation and a strong, but non-significant, trend towards decreased mortality.11

Cardiogenic Pulmonary Edema
HFNC has also been investigated in the setting of cardiogenic pulmonary edema, where NIPPV has already proven to decrease the need for intubation and decrease mortality.12 In the Annals of Emergency Medicine in 2017, HFNC was better than conventional oxygen therapy, but the study excluded patients who needed NIPPV or intubation or who had oxygen saturations less than 90%.6 HFNC may provide a very small amount of positive pressure, but its use in cardiogenic pulmonary edema should be limited to use in patients who have contraindications to NIPPV, do not tolerate NIPPV or have advance directives precluding intubation.

Hypercapnic Respiratory Failure
Similar to cardiogenic pulmonary edema, the use of NIPPV in hypercapnic respiratory failure has demonstrated reduction in intubation and mortality in COPD with a relative risk of 0.42 and 0.41, respectively.13 One may be reluctant to use HFNC in patients with acute on chronic hypercapnic respiratory failure due to diminished respiratory drive with hyperoxia, but there are theoretical benefits to HFNC. These may include humidified air to loosen secretions, relief of bronchospasm with warm air, and increased flow to match patient’s demand. There only exists case report evidence where venous pCO2 levels have normalized with HFNC in addition to standard medical management.14 One must exert extreme caution using HFNC in pure hypercapnic respiratory failure, but as in cardiogenic pulmonary edema, it may be utilized if intubation and NIPPV are non-options.

Apneic- and Pre-oxygenation
HFNC has also been evaluated as a tool for preoxygenation and apneic oxygenation. Preoxygenation markedly prolongs time to desaturation.15 A large meta-analysis including over 1800 patients showed that apneic oxygenation through a variety of methods, including HFNC, may decrease hypoxemia, improve first pass success, and increase the nadir peri-intubation oxygen saturation.16 Included in this meta-analysis was the THRIVE technique, which originally evaluated HFNC use in the operating room for 25 patients with anticipated difficult airways. Of the 25 patients who were included, 12 were obese and 9 were stridulous. They were able to achieve a median apnea time of 15 minutes with no desaturations <90%. Two patients had HFNC used for the duration of the procedure, with apnea times of 32 and 65 minutes.17 A study of apneic oxygenation for patients undergoing endotracheal intubation in the ICU compared 3 minutes of non-rebreather and a pharyngeal oxygen delivery catheter to HFNC delivering 100% oxygen at 60 L/min and found that median lowest oxygen saturation during intubation in the HFNC group was 100%, compared to 94% in the non-rebreather group. The odds ratio for severe hypoxemia was 0.14, favoring the HFNC group.18 The PREOXYFLOW study randomized 124 patients undergoing intubation in 6 French ICUs to high flow face mask preoxygenation or HFNC preoxygenation and apneic oxygenation. They found no difference in lowest oxygen saturation or mortality.19 This study is more consistent with the FELLOW and ENDAO studies, which have called into question the utility of apneic oxygenation altogether.20-21 While the data regarding apneic oxygenation is heterogeneous, it may be beneficial for a patient already on HFNC to remain on HFNC during endotracheal intubation.

Practical Considerations in the ED
Respiratory therapists are well-versed in the use of HFNC. Be considerate of the time and work involved in setting up the HFNC circuit, which is institution dependent, but generally takes 10-15 minutes to retrieve and set up. HFNC has two parameters to be set by the provider—flow rate and FiO2. A rule-of-thumb is to set the flow rate around 20-30 L/min and titrate the flow to the patient’s respiratory rate and work of breathing. Most HFNC circuits can deliver a maximum of 60 L/min. FiO2 will then be titrated to the desired oxygen saturation. The provider can consider de-escalating to conventional oxygen therapy when the patient’s work of breathing and oxygen saturation are acceptable on 20 L/min and 50% FiO2.

Pitfalls
HFNC may be harmful if the need for intubation was merely delayed by its use. In 2015, Kang et al. in Intensive Care Medicine retrospectively evaluated mortality and outcome of patients receiving HFNC admitted to the ICU. Out of the 616 patients who received HFNC, 349 improved and did not require intubation. Of the 267 patients who did not improve, 175 required intubation. Patients who were intubated more than 48 hours after initiation of HFNC were nearly 28% more likely to die despite having similar illness severity and etiology of respiratory failure to the early intubation group.22 While the majority of the patients improved without mechanical ventilation, this study suggests that if the trajectory of respiratory failure is toward mechanical ventilation, it may be harmful to further delay intubation.

Summary
Emergency physicians should be familiar with the benefits and pitfalls of HFNC. HFNC is well tolerated by patients, and its use contributes to superior outcomes for patients with pure hypoxemic respiratory failure. It may be useful in cardiogenic pulmonary edema and hypercapnic respiratory failure, but NIPPV should be the first line therapy in those disease processes. If you are concerned patients will need mechanical ventilation to support them through their illness, do not delay intubation with NIPPV or HFNC. If the patient’s trajectory is toward intubation, HFNC can facilitate preoxygenation and apneic oxygenation as well or better than standard measures.