Is There a Doctor on Board? Answering the Call for Help

It is not every day that we have an encounter that reminds us exactly why we love emergency medicine. I was fortunate and unfortunate enough to have one of these events occur on a Boeing 747 at 33,000 feet in the sky. On a return flight from an excellent vacation, I heard the oft-quoted overhead announcement, “Is there a doctor on board?”

As my adrenaline kicked in, I reported to the second deck, where a pediatrics attending was already present. We spoke with the purser, who quietly told us our patient had suddenly fallen ill after eating ice cream 30 minutes prior. He had developed epigastric abdominal pain, chest pain, and nausea.

As we moved toward the front of the aircraft, we met our patient — the captain of our flight. We walked into the private cockpit area, slightly away from the flight crew, and began asking him questions. He was in his 50s and stated that he started having moderate epigastric pain and chest pain after eating his meal. His only medical history was hypertension, and he had never had symptoms like this before.

The pediatric attending presumed he had gastritis, so we gave him omeprazole. My emergency medicine mindset, however, prompted me to think about a worst-case scenario. The patient appeared uncomfortable, diaphoretic, and pale as he gripped his epigastric area. His vital signs, however, were normal.

I decided to give him aspirin and placed an intravenous line for fluid administration. He also received metoclopramide for one episode of vomiting, and morphine for pain relief.

At this point, the co-pilot and first officer were flying the plane. I spoke with the flight crew regarding my concerns, and they arranged for a discussion with the ground medical team. The ground medical doctor asked me for my presumed diagnosis, and I informed him that although I could not be sure, it seemed very likely cardiac in nature. The decision was made to divert the plane to the nearest airport, 2 hours away. We continued to monitor the patient throughout the flight. Another pilot from the same airline, who happened to be on the flight, assisted in landing the plane.

Upon landing, EMS performed an electrocardiogram – which showed an anterolateral ST-elevation myocardial infarction. The pilot was transported to the nearest cardiac catheterization center, where a single stent was placed. 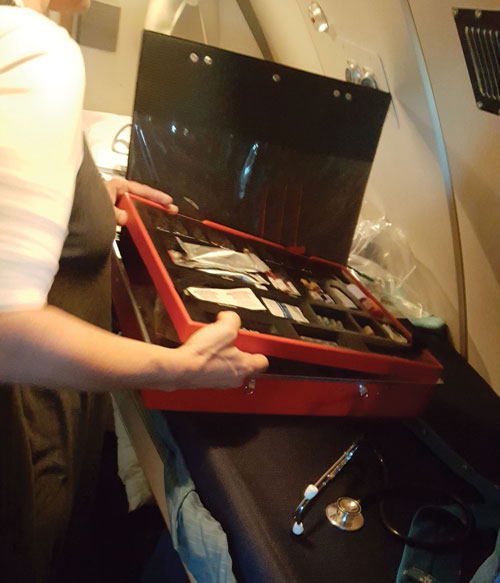 View of the well-organized medical kit

When I answered the call for help on board, a lot of questions went through my mind: Is this even an emergency? What resources are available on a flight? Will I be safe in the event of a poor outcome? How will my decision impact the patient and the other passengers?

First, what constitutes a medical emergency on a flight? Most events that occur on planes can be handled by cabin crew providing reassurance, basic first aid measures, or over-the-counter medications. A medical emergency occurs when a patient requires further resources and utilizes on-board medical professional help, ground medical assistance, or has a medical event that results in diversion or death.1

In terms of resources, this flight was furnished with a well-stocked enhanced medical kit. According to ACEP, “FAA regulations require all U.S. commercial airlines weighing 7,500 pounds or more and serviced by at least one flight attendant to carry a defibrillator and an enhanced emergency medical kit. Flight attendants must be certified in CPR, including the use of an AED, every 2 years. Pilots must also be trained in the use of the AED.”2 Domestic flights may have very minimal resources because they are usually flying over ground with multiple airports nearby in the event there is a need for diversion. Internationally, there is much variance between airline medical kits, but most will have basic medications.

What happens when your patient is the pilot? In-flight pilot incapacitation is discussed in aviation literature, with the most common cause being gastroenteritis. For the two-pilot team typical of larger transport aircraft, incapacitation of only one of the pilots is unlikely to present a significant risk.3 There are multiple standard operating procedures for this event. In this case, the co-pilot continued flying with the assistance of the first officer, until another pilot was identified on board. For the medical aspect, the senior crew are available for assistance and are trained in basic patient care. Regardless, as a physician, the main concern should be the patient. The crew will take care of the plane.

Medicolegally, the aspect of providing care on flights is controversial — not much has been written on the topic. According to ACEP, “Federal legislation contained in the Air Carrier Access Act of 1998 has provided limited protection and guidance for physicians and other medical professionals who volunteer their services during flight.”2 However, in the case of an international flight, liability is generally determined by the law of the country where the aircraft is registered. Some countries in Europe and Australia impose a legal obligation to assist, and a physician can be penalized for not assisting. Furthermore, even with “Good Samaritan” laws, unreasonable or extreme actions leading to poor outcome are not covered, so good clinical judgement is necessary.1

The most important resource I had was the senior flight attendant and crew. They knew where everything was located and provided the emergency medical kit exactly when we needed it. They kept us in the loop with what the ground team was thinking and continued to ask for updates from us. After the event, the first officer noted this would be a scenario used to train other pilots and crew. They also asked us for feedback for improving the medical kit.

We documented our encounter thoroughly on an airline-provided medical form. We took a photo of it for our own record-keeping. As with all patient encounters, thorough documentation is vital, both for medicolegal purposes and personal medical records.

A few days after the incident, I received an email thanking us for our actions on board. The captain was recovering—he had suffered a large ST-elevation MI, but he was alive and well. As I settled back into the life of a resident, surrounded by all the technology of an advanced emergency department, I couldn”™t help but reflect on this experience of helping a patient without all the diagnostic modalities utilized every day in the ED, and I couldn”™t imagine doing anything but emergency medicine.