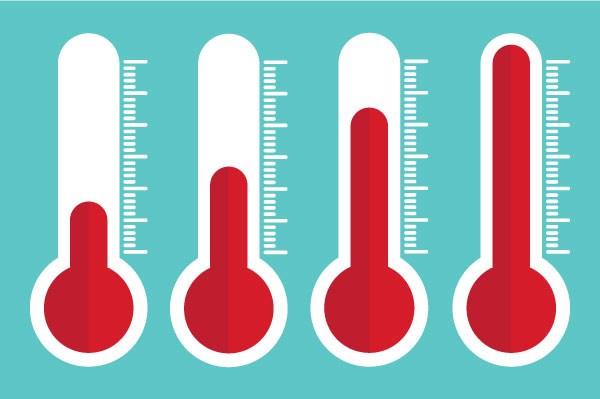 It's Getting HOT in Here! A Review of Serotonin Syndrome

You are called to evaluate a 74-year-old woman who was found by her daughter, confused and unable to get out of bed. The patient's only medical history is depression, and she has taken a stable dose of fluoxetine for many years. She was recently started on ciprofloxacin for a urinary tract infection. On clinical exam, she is febrile to 40.8  °C and is moderately agitated. She responds inappropriately to questions; however, she is able to follow simple commands. She has dilated pupils, dry mucous membranes, and continuous horizontal eye movements while looking straight ahead. Her arms and legs are rigid, with a slight tremor, and she has significant, inducible ankle clonus.

Serotonin syndrome is one of only a handful of potentially life-threatening diagnoses that should be considered in patients presenting with profound hyperthermia and altered mental status. The condition is caused by an increased level of serotonergic activity, which can occur when a serotonergic medication is started, titrated, or combined with a second medication that augments the metabolism of the original drug. The condition represents a wide spectrum of clinical disease, ranging from a slight tremor to profound hyperthermia, autonomic instability, and death. While roughly 13% of Americans are prescribed serotonergic medications for depression, the true incidence of serotonin syndrome is unknown because of relative underreporting of less severe clinical presentations.1

Serotonin syndrome presents as an acute (<24 hour) process after ingestion of a drug that increases central nervous system serotonin levels. The classic features include a triad of altered mental status (anxiety, delirium, confusion), autonomic nervous system excitation (diaphoresis, hypertension, hyperthermia >38  °C), and neuromuscular excitation (clonus, tremor, hyperreflexia).2 Serotonin syndrome is a clinical diagnosis. Several criteria have been developed to aid clinicians in diagnosis, with the most sensitive (84%) and specific (97%) being the Hunter Criteria (Figure 1).3 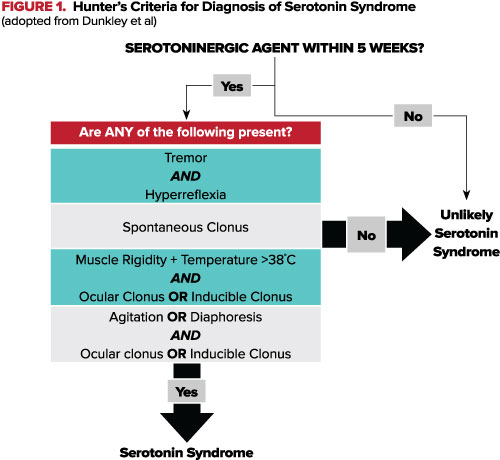 Management of serotonin syndrome largely depends on the severity of the presentation. Mild cases (those without fever but with tremor and hyperreflexia) can be treated with supportive care, discontinuation of the causative agent, and benzodiazepine administration. Supportive care is directed at the normalization of vital signs, and patients should be placed on a monitor and given intravenous (IV) fluids and oxygen support as needed.

In the agitated patient, benzodiazepines are the preferred method for sedation, as they have been shown to blunt the adrenergic component of serotonin syndrome and improve survival in animal models.4 When physically restrained, agitated patients are at risk of worsening hyperthermia as well as lactic acidosis and rhabdomyolysis. Haloperidol and other agents with anticholinergic properties should be avoided as these can inhibit sweating and worsen hyperthermia. For patients with persistent hypertension and tachycardia, consider short acting agents, such as esmolol or nitroprusside.1 On the other hand, persistent hypotension from MAOIs should be treated using small doses of direct acting vasoactive agents, such as phenylephrine, epinephrine, or norepinephrine.2

Should these measures fail to control agitation and improve vital signs, treatment with cyproheptadine may be considered.2 Cyproheptadine is a histamine-1 receptor blocking agent with non-specific serotonergic blocking effects and is the recommended antidote for serotonin syndrome; however, its efficacy has yet to be determined in clinical trials. Dosing should begin with 12 mg orally (tablets can be crushed and out down a nasogastric or orogastric tube if needed) and redosed with 2 mg every 2 hours if symptoms persist. Once symptom control is achieved, maintenance dosing consists of 8 mg every 6 hours. A total of 12-32 mg in a 24-hour period may be required, as this dose has been shown to bind 85-95% of serotonin receptors.5 Side effects include transient hypotension due to loss of vascular tone, which is short-lived and responds to IV fluids.

Hyperthermic patients with temperatures greater than 41.1  °C should be considered to be severely ill. In addition to the previously mentioned therapies, these patients require endotracheal intubation, sedation, and prolonged paralysis with a long acting non-depolarizing agent such as cisatracurium to help control temperature. Core temperature should be monitored using a temperature sensing Foley or rectal probe. Beyond this, severely hyperthermic patients should be cooled using standard measures such as misting, fans, cooling blankets, and ice packs.

There are several drugs that should be avoided in serotonin syndrome. Succinylcholine should be avoided given the risk of hyperkalemia caused by rhabdomyolysis. Acetaminophen and other antipyretics are not useful and should be avoided as hyperthermia is secondary to muscle activity, not an alteration in the central temperature set point. Long acting antihypertensives, specifically propranolol, also should be avoided because fluctuations in blood pressure may lead to shock.2 Bromocriptine, an agent used in NMS, is contraindicated as case reports of its administration have led to clinical worsening and even death. Dantrolene should also be avoided, as it has not been shown to affect survival.

The patient immediately received cold IV fluids, ice packs to the armpits and groin, and was placed on a cooling blanket. Her temperature was lowered over 2-3 hours, although she required a cooling blanket for an additional period to maintain euthermia. She received serial low doses of IV lorazepam and a single dose of cyproheptadine. These measures slowly improved her agitation and rigidity. She did not require intubation. She was admitted to the intensive care unit and was discharged from the floor 2 days later. It was felt that the interaction between ciprofloxacin and fluoxetine might have triggered the episode. Her antibiotic regimen was adjusted and she was instructed to stop taking her fluoxetine for 2 weeks.