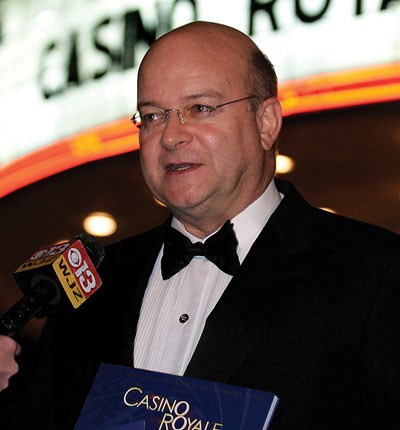 Advancements in medicine are driven by the curious, the dedicated — even, sometimes, the indignant. Throughout his three-decade career, innovator and physician Jim D'Orta has been all those things. It's what led him to pioneer the “Minute Clinic” concept in the United States, and to lead the fight to make automated external defibrillators a customary piece of public safety equipment, and to encourage medical device improvements for everything from intubation to wound care.

During his residency, Dr. D'Orta served as EMRA President — and the leadership mantle fit him well. In the years since, he has founded and fostered several companies and become an influential voice in the house of medicine and within the Beltway. The Augustine D'Orta Award, presented annually by EMRA to a resident who demonstrates outstanding community-minded, grassroots-oriented political involvement in health policy or community issues, reflects Dr. D'Orta's ongoing commitment to public health.

You know, my EMRA chapter was such a great, great time. I remember being in Dallas, Texas, in the way back, and organizing our political ticket for the EMRA elections and putting together our leadership team. We focused pretty quickly on the EMRA awards, which we started during my administration as EMRA president. I think it really highlighted some great people in EM. We built support within the house of medicine where the specialties recognized the contributions we were making. We started the EMRA Antibiotic Guide — I think it was called the Antibiotic Handbook then — in our era. We led several disaster relief efforts, thanks to Jim Dougall and Carla Murphy. We had great leaders in EMRA who truly reached back and pulled the younger residents to leadership positions within the college. Drs. David Tallon, Jim Dugal, Leslie Zun, and Woody Woodburn were the key EMRA resident leaders. Drs. Joseph Waeckerle, Richard Stenis, JD McKeown, Larry Bedard, Mike Bishop, Greg Henry, Steve Dersnick, and other ACEP leaders of the time, along with Collin Rorie and Ben Monger, all made a difference.

How can residents influence the specialty?

I think we need to be scholars but we need to not accept everything we read. We need to challenge the system. We need to challenge therapies — we need to be scientists. Had we not challenged the system we never would have had the AED, which was a landmark change in out-of-hospital cardiac arrest. If we did not have Minute Clinics, we would be just so suffocated in our specialty. If we didn't have NPs or PAs who are eager to be involved in EM the specialty would not have advanced, and I learned that during my time in EMRA. Many physicians are not as exposed to the team effort of emergency medicine. In EM, we're not an individual — we're a member of a team.

Best advice for a physician on the verge of a career in emergency medicine?

Be a great doctor to your patients, and at the same time you need to wealth-build. This is not something taught in residency, but you know — no money, no mission. And physicians really do not get that training. Seek out mentors who have been successful. I've found in my life that if you as an individual approach another individual who has been successful in a field of interest to you, and you ask for help — they generally will give it. We as physicians start out essentially as humanists. We entered into a world where leadership didn't focus on one's abilities in the social field so much as in the scientific realm, but the fact is it's the centrist who is the successful physician. It's not the one who lacks an understanding of how things work. I had a great mentor back when I was just finishing my residency, Frank Pearl — one of the first leveraged buyout dealers in a company called Wesray, which included William E. Simon, a former Secretary of the Treasury. Frank taught me so much about leveraging and growing businesses. It's all about leveraging our knowledge of finance and joining it with the skilled leadership of physicians. It's the challenge of the young emergency physician to understand how to wealth-build.

How can residents develop an entrepreneurial spirit?

Remove the word fear from your vocabulary. Risks can be analyzed and overcome as long as you have a clear vision. You can't let fear stop you from wanting to move forward. I think Clay Christensen, a great innovator from Harvard, used the phrase “the disruptive thinker.” The disruptive thinker understands that if there's an obstacle in front of them, they either go over it, or under it, or around it — or through it. But they don't let it stop them.

Looking for partners is the networking portion — and you can start with EMRA and ACEP and the events hosted at the national and state levels. Being active in the specialty is a way to reach out. Also, get involved in community-minded spirit awards or social awards; that's a way to meet major donors and grateful patrons. Those are some of the things that laid the foundation for me.

I also reached out to some of the large houses in private equity. They are always looking for dynamic individuals within their spheres of specialty. While the internet may give you a world of information, remember that most successful entrepreneurs don't blow their own horns online. Success is dealt on a one-on-one level. You need the human interaction.

Augustine D'Orta was my grandfather, who was a carpenter. He believed very strongly that the growth of business comes from the fellowship of business. He developed coalitions of businesses in New York. He started a club called the Dog Eat Dog Club, which developed into the Chamber of Commerce. That concept of working with your competitor for the greater good tends to drive growth. My father (also Augustine D'Orta) was also a firm believer that great leaders in society make great business individuals.

I love the spirit of EM. I love the excitement of it. There's also a gratification: it's the greatest feeling to take someone who is sick and make them well or get them on the path to being well — it's a high that I've never been able to reproduce elsewhere in my professional career. Even if your patient dies, their family becomes your patient. You guide them through those first moments of loss. You are there for them, to help them face their new future.

How do you grow into that responsibility?

My mother and father were very caring and open people, and we had a great family. It was also modeled for me in my EM residency at Georgetown. Although I consider myself a believer, I'm not a great advocate of religion. But at Georgetown the Jesuit halo effect of caring for the whole person was evident in every corner of the institution — you couldn't get away from it. The Georgetown method of curing the entire person was very much the mission of both the medical school and the residency. That's where I felt it, I lived it, and I was taught it.

If you could change one thing about the practice of medicine today, what would you change?

I love to read history, and “No Ordinary Time” captures the great story of FDR. In addition, I really enjoyed another book by the same author: “Team of Rivals: The Political Genius of Abraham Lincoln.”

The Isle of Capri. It's a little bit of heaven that's fallen from the sky. It's about 30 miles off the coast of Naples, Italy. We were there with the kids at the beginning of summer and we visit frequently.

What do you consider to be your crowning achievement?

My crowning achievement is being the father of triplets — AJ, Cubby, and Maryrose — with my partner, Jed.

Our favorite family fun nights are pizza parties. We love them. We always end up with multiple pizzas.