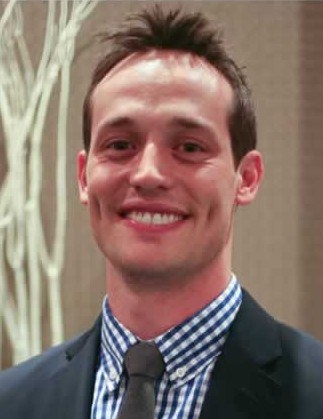 A passionate advocate of emergency medicine and leader in the field of critical care education, John Greenwood, MD, has fast become a rising star in the EM community. He attributes his tremendous success to hard work and natural curiosity, but insists that his desire to be a better clinician – and to mentor others in the treatment of critically ill patients – inspires him to keep learning, teaching, and leading.

While an emergency medicine resident at the University of Maryland, where he is now a critical care medicine fellow, Dr. Greenwood joined EMRA's Critical Care Division, eventually serving as the groups's chair. Under his leadership, the division became one of EMRA's most active, publishing two enormously popular handbooks – the EMRA Critical Care Handbook and PressorDex – during his tenure. PressorDex, which is also available as a top-rated iOS app, has become one of EMRA's leading educational resources.

Dr. Greenwood also was instrumental in influencing the creation of a critical care board certification for EM-trained physicians; and developing grant opportunities within the subspecialty, including the new Emergency Medicine Foundation/EMRA Critical Care Research Grant. He has mentored countless residents interested in pursuing a career in critical care. Dr. Greenwood and his wife, Beth, a family medicine physician, live in northern Maryland with their two children.

What first attracted you to emergency medicine, and why did you choose to specialize in critical care?

I realized very early into my EM rotation in medical school that the specialty was a good fit for me. I loved the work, the people, and the challenges that such a fast-paced environment provided. I thought it was extremely exciting to receive completely undifferentiated patients and be able to solve their problems. That's an opportunity you don't have in many other fields. It can be daunting – even scary – to know that it's up to you to pick up the pieces, particularly when you often know very little about the patient you're treating. But, for me, critical care is an exhilarating field; there's always something new to learn.

What inspired you to create PressorDex? 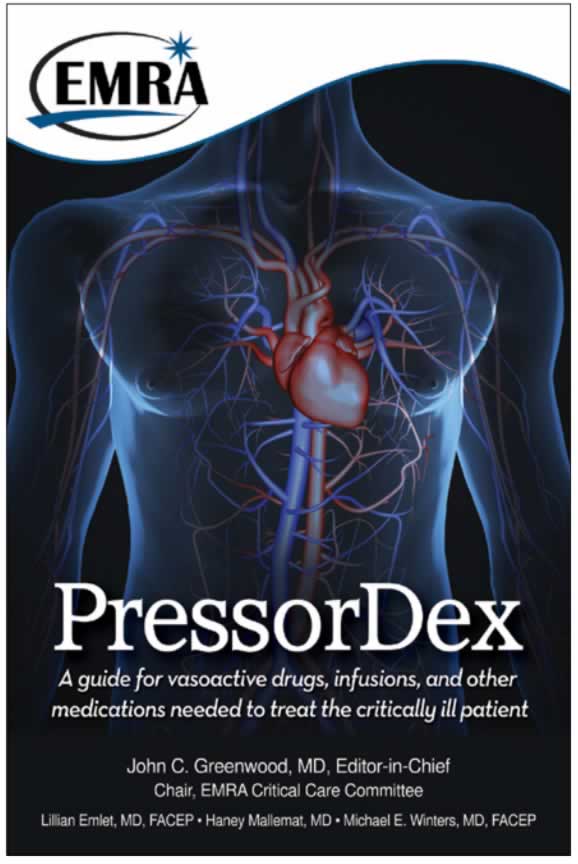 There were many reasons, but I suppose the initial concept began as a way to find clarity and ease my own anxiety. When I first started my residency, the thought of treating a really sick patient with pressors was stressful. I thought there was a gap in emergency medicine education surrounding these very complex medications, and I thought that creating and presenting an algorithmic approach to managing critically ill patients might be helpful to a lot of people – like me. As I started to further explore the concept of PressorDex and spoke with other clinicians, I realized how many of them already were using EMRA's Antibiotic Guide. I thought that we could do something similar, but gear it specifically toward the care of critically ill patients.

My ultimate goal in creating the book was two-fold. I wanted to help people better take of patients in the ED, but I also viewed it as an opportunity to show off how smart and talented emergency medicine physicians are in the management of these kinds of patients. In the last three years, there has been a lot of growth in the EM community, and people are noticing. When physicians from other specialties – like internal medicine, surgery, and anesthesiology – approach me and ask for copies of the book, I proudly say that it was written entirely by emergency medicine physicians.

Have you been surprised by how well-received the book and mobile app have been?

It really has been amazing to see PressorDex ”˜in action' in hospitals all over the world; I've heard from clinicians from as far away as Europe, Australia, and Asia. It's just incredible to see how one little idea can affect people all over the planet – particularly the iOS app, which has made the book that much more accessible. We're going to be able to incorporate some of the feedback we've received from users into the upcoming 2nd edition, which will be exciting. It's going to be fun to see the product grow and reach more people as the years go on.

How has your relationship with EMRA grown through the years, and in what ways do you feel the organization has enhanced your career?

Getting involved with EMRA early in my career truly has been one of the best decisions I've ever made; the organization has been an invaluable launching pad for me. The leadership, networking, and educational opportunities EMRA has provided have been priceless.

The resources that the organization makes available have had a huge impact on the kind of clinician I am; simply put, they've made me better. I spent countless hours listening to EM:RAP and consulting EM Resident and the Antibiotic Guide – they enhanced my education immensely.

I'm not sure you'll find a bigger advocate of residents and emergency medicine than EMRA. The ideas I've presented to the organization have always been met with a ”˜yes'; the leadership – both the board and the staff – is quick to ask: How can we make it happen? As a person who is interested in creating things and developing projects that will help make other EM physicians better, that kind of response is incredibly inspiring. I don't know of any other organization that supports residents in that way. When you’re managing critically ill patients, time matters. Make the most of it with EMRA PressorDex®: Critical Care Medication Guide, the best on-shift guide to pressors, vasoactive drugs, continuous infusions, and other medications. This indispensable pocket resource helps you choose the right medication and dosages, even during the busiest ICU shift.

Researched by 100 critical care specialists and pharmacy faculty from 35 institutions around the country, this guide offers evidence-based options you can trust.New features with the 4th edition:

Order now from Amazon or  the ACEP Bookstore!