A 63-year-old male is brought in by EMS after having a witnessed cardiac arrest while at work. Bystander CPR was started immediately, and he was defibrillated twice in the field for ventricular fibrillation with successful return of spontaneous circulation. On arrival to the ED he is intubated. His ECG shows T wave inversions in I and aVL, with ST depressions in V5 and V6 (Figure 1).

The first troponin is within normal limits. While initial vital signs are normal, he soon develops worsening bradycardia and severe hypotension. After a normal head CT and discussion with the on-call interventional cardiologist, the patient is taken for percutaneous coronary intervention (PCI) where a 99% occlusion of the proximal left circumflex (LCX) is found and thought to be the culprit lesion (Figure 2).

He is transferred to the Cardiac Care Unit, where he ultimately has good neurologic recovery.

Acute reperfusion therapy after a myocardial infarction (MI) has long been the mainstay in treatment of acute coronary syndrome (ACS), reducing both mortality and morbidity.1 However, recognizing which patients require emergent reperfusion versus who can wait on an urgent basis is more difficult. of ST elevation myocardial infarction (STEMI) focuses on rapid revascularization of the total coronary artery occlusion, with guidelines recommending percutaneous coronary intervention (PCI) or fibrinolysis within designated time parameters.2 Indications and timing for PCI for non-ST elevation ACS (NSTE-ACS) are less clear.3 NSTE-ACS encompasses a broader spectrum of disease than STEMI and ranges from unstable angina (chest pain at rest without ECG changes or elevated cardiac biomarkers) to non-ST elevation MI (NSTEMI), characterized by either elevated biomarkers or ECG changes that do not meet STEMI criteria.

While fibrinolysis is not associated with increased survival in NSTE-ACS, PCI is still considered an important aspect of therapy. While the ideal timing of PCI in NSTE-ACS remains unclear, better outcomes have been shown if PCI is performed within 24 hours of symptom onset.4

LCX artery occlusions are estimated to account for 20% of MIs.5,6 They may pose a diagnostic dilemma, primarily if the ECG findings are non-diagnostic for STEMI. Subsequently, these patients are more likely to undergo PCI more than 24 hours from onset of symptoms compared to patients with more readily recognizable left anterior descending (LAD) and right coronary artery (RCA) occlusions.5 LCX lesions are associated with increased risk of heart failure and mortality at 90 days and 1 year compared to RCA and LAD lesions.7 In addition, there have been multiple reports indicating higher peak levels of cardiac biomarkers, suggesting larger infarct sizes and thus more myocardial necrosis.8

Attempts at improving early diagnosis of total occlusion lesions in the LCX have had limited success. According to one study, angiography-proven LCX total artery occlusions only met STEMI criteria 46% of the time, and the addition of posterior leads (V7-V9) only improved sensitivity 6-14% of the time.9 Isolated V2 and V3 ST segment depression has also been purported to be diagnostic. In one study of 111 patients, the specificity of this finding was 96% with a sensitivity of 70%.10

STEMI or no STEMI

LCX lesions highlight an important issue in the modern era of ACS management, namely that the traditional diagnostic criteria for STEMI do not always fit the current understanding of pathophysiology. STEMIs are thought to be a complete infarction along vascular territories, whereas NSTE-ACS encompasses sub-total occlusions with varying effect. Currently, STEMI remains an electrocardiographic diagnosis, despite failing to encompass all forms of total occlusive disease.2 In patients with total artery occlusions who do not meet STEMI criteria — as in some LCX occlusions — delayed PCI poses a significant risk for mortality and morbidity.

Indications to pursue emergent PCI in NSTE-ACS (ie, many LCX occlusions), include the following: hemodynamic instability, persistent chest pain despite maximum medical therapy, severe left ventricular dysfunction or heart failure, new or worsening mitral regurgitation or a new ventricular septal defect, or sustained ventricular arrhythmias.3 Overall, these criteria are indicative of large regions of myocardium being at risk. It remains unclear whether these patients would benefit from fibrinolytics if total occlusion is suspected despite non-diagnostic ECG findings. 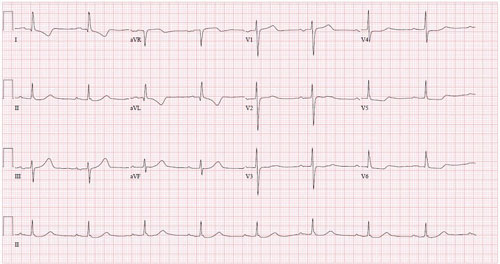 LCX occlusions are an underdiagnosed clinical entity in ACS management. Despite non-diagnostic ECG findings, total LCX occlusion should be considered in clinical presentations consistent with ACS. If the patient appears clinically worse than the ECG findings would suggest, consider discussing with interventional cardiology about pursuing PCI earlier than the NSTE-ACS protocols would dictate. These patients can have STEMI pathology without STEMI findings, yet will suffer the same downstream consequences.