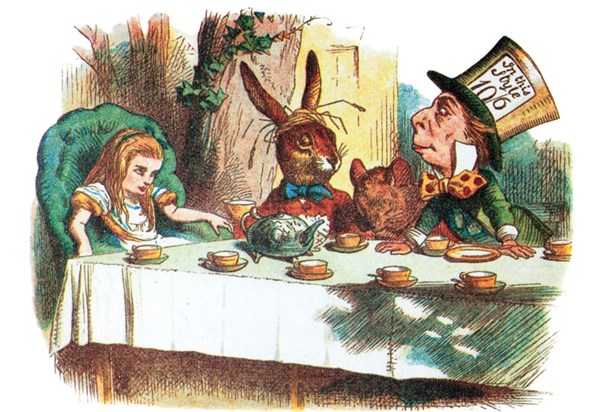 Mad as a Hatter: Physostigmine for Delirium Control in Anticholinergic Toxicity

A 34-year-old female with a history of bipolar disorder, depression, and multiple previous suicide attempts is brought into the emergency room after ingesting “an entire bottle” of diphenhydramine in a suicidal gesture. Family found the patient moaning on the floor and called 911. Paramedics at the scene find no medications other than the diphenhydramine. Her vitals are as follows: Temp 100.1 F, HR 122, BP 101/56, RR 22. A point of care glucose is 94. Pertinent exam findings include dry mucous membranes, dilated pupils, normal muscle tone, and normal reflexes. She is attempting to climb out of her hospital bed, reaching out at objects that are not there, and exhibits a mumbled speech pattern. Nurses are having a difficult time obtaining blood and an ECG, and several security guards are at the bedside attempting to control the patient.

This presentation is one that every emergency physician will confront during their career. Diphenhydramine toxicity is especially common because of its easy access as an over-the-counter therapeutic as well as its abuse potential.1,2 When presented with this type of patient, many providers would consider treatment with benzodiazepines, antipsychotics, physical restraints, or all of the above. Unfortunately, these interventions do not reverse the effects of anticholinergic delirium caused by diphenhydramine overdose.3 This is because the delirium is caused by blockade of muscarinic receptors in the brain. Therefore, delirium can be completely refractory to repeated doses of benzodiazepines and may actually be worsened by the use of some antipsychotics that have anticholinergic properties.4 Often this leads to an admission to a monitored floor until the medication wears off. In severe circumstances, patients may require intubation and ICU placement — two interventions with significant associated morbidity and mortality.5

Fortunately, there is a better approach: delirium reversal with physostigmine.

Physostigmine is a centrally-acting acetylcholinesterase inhibitor that has fallen out of favor since the publication of two patient case series in 1980.3,6 These two patients were both in the final throes of severe TCA overdose –both with a widened QRS, one already hypotensive and seizing – who were given a dose of physostigmine and then developed bradycardia and asystole.7 Based on this temporal relationship alone, the authors concluded that the “use of physostigmine in patients who have ingested an overdose of TCAs carries the risk of life-threatening bradyarrhythmias.” In retrospect, it is clear these patients had clear contraindications to physostigmine and had received inadequate sodium bicarbonate to treat their life-threatening sodium channel blockade prior to their cardiac arrest.

Since the publication of this case series, the use of physostigmine has been largely avoided because of the fear of causing cholinergic excess (bradycardia, seizure, and bronchorrhea).6 Although the concern arose from TCA overdose, emergency department providers have become hesitant to use physostigmine for delirium and agitation caused by other anticholinergic medications like diphenhydramine.

In the intervening years, several authors have reassessed the concern and published various studies investigating not only the efficacy, but also the side effect concerns.6,8-11 Overall, the use of physostigmine in anticholinergic toxicity has been associated with better delirium control, fewer intubations, and a remarkably low rate of bradycardia, seizures, and cholinergic excess.6,8–10 Authors have proposed that the slow administration of 1-2mg physostigmine IV infusion over 5-10 minutes for adults without relative bradycardia or diaphoresis (both which would suggest the delirium is not secondary to anti-muscarinic effects) is safe.3,8 Absolute contraindications include QRS >100ms or other signs of sodium channel blockade on ECG (such as R' in aVR), seizure, and bradycardia. Relative contraindications include TCA exposure, severe asthma, or ileus. It is important to mention that the reversal effect usually takes several minutes but not necessarily seconds, as one would see in opioid reversal with naloxone. In addition, an infusion can be considered.

After delirium is controlled in anticholinergic toxicity, the emergency provider can ideally obtain a more accurate history and the patient can better cooperate with medical care. The importance of this is highlighted in the outcome of this patient's case – in which delirium was not reversed due to the aforementioned concerns regarding physostigmine. The young woman's providers were unable to determine that she also had ingested a large overdose of a parent's valproic acid (a fact revealed much later). She was given benzodiazepines until excessive sedation required intubation. On day 2, the patient remained intubated without additional administration of sedative medications. On day 3, the work-up was broadened because her mental status did not improve. An ammonia level was noted to be markedly elevated. Despite the administration of levocarnitine to treat the presumed valproic acid toxicity, her neurological exam worsened, and she developed severe cerebral edema. Ultimately, care was withdrawn as she progressed to brain death.

Although physostigmine may not have avoided the catastrophic consequences of a massive valproic acid overdose, it may have given the emergency provider the chance to clear her delirium early, interact with the patient, and obtain the history that may have been critical in saving her life.