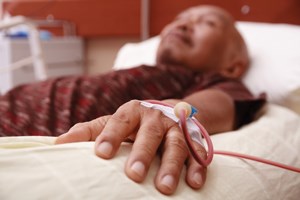 Case
A 52-year-old woman with a history of diabetes, hypertension, hyperlipidemia, neuropathy, and frequent urinary tract infections arrives by ambulance for progressive confusion over the last three days. Her medications include: atorvastatin, gabapentin, glipizide, metformin, paroxetine, quetiapine, tramadol, hydrocodone/acetaminophen. On arrival, she is confused, moaning, and agitated.

Of all of the marked laboratory abnormalities discovered in this patient, probably the most shocking finding is the severely depressed pH, which is out of proportion to clinical presentation. The differential diagnosis at this point should include sepsis, diabetic ketoacidosis, alcoholic ketoacidosis, toxic alcohols, and biguanide (metformin) toxicity. While this particular patient's presentation is likely multi-factorial, she also has metformin-associated lactic acidosis (MALA), secondary to metformin use during renal failure.

Incidence and Pharmacology
MALA can be caused by: 1) therapeutic metformin toxicity, where a patient continues prescribed metformin during poor tissue perfusion (congestive heart failure, myocardial infarction, sepsis) and renal failure, leading to drug and lactate accumulation, and 2) deliberate overdose. The former is rare, but far more life-threatening due to comorbidities and renal failure.1 Estimated incidence is three cases per 100,000 patient-years and mortality rate is 50%.2-5 Metformin is 90% renally excreted, and when glomerular filtration rate drops below 50 mL/minute, clearance is decreased.6,7

Mechanism
Lactic acidosis is typically categorized in two distinct subgroups: types A and B. Type A is caused by impairment in tissue oxygenation, resulting in overproduction of lactate (i.e., shock, respiratory failure, sepsis, ischemic bowel, carbon monoxide, or cyanide). Type B is caused by compromised lactate metabolism without hypoxia, often seen in toxic ingestions (ethanol, propylene glycol, salicylates, biguanides, anti-retrovirals, etc., but also liver disease, thiamine deficiency, or an inherited metabolic defect in lactate clearance). The exact mechanism by which supratherapeutic levels of metformin produce such a severe type B lactic acidosis is unclear, but it has been postulated that reduced gluconeogenesis may cause an increase in the gluconeogenic precursors including lactate and pyruvate, and/or inhibit pyruvate dehydrogenase, preventing conversion of pyruvate to acetyl-coenzyme-A.8,9

Recognition and diagnosis
Early in the course, patients may have nausea, vomiting, diarrhea, abdominal pain, malaise, dizziness, and myalgias. They rapidly progress to encephalopathy with eventual respiratory failure and vasodilatory shock. Laboratory values include a severe anion gap metabolic acidosis, often with a pH <7.0, and a lactate >10, with hyperkalemia (secondary to acidemia and cellular shifts and/or renal failure). Hypothermia and hypoglycemia are less common, but have been reported. The diagnosis is made by clinical suspicion. It is possible to test for a serum metformin level, but this usually takes days to result and is not helpful in the acute period. In the setting of acute ingestion, the drug reaches peak concentrations between 2-3.5 hours, thus patients can arrive stable and decompensate quickly in the ED.9,10

Treatment
Metformin toxicity, while rare, is important for the emergency physician to recognize in order to initiate prompt, life-saving interventions. While supportive care will often help bridge the treatment gap, the definitive treatment is dialysis. Dialysis will treat the acidosis, clear the lactate and, to a smaller degree, will remove metformin; therefore, it is indicated in patients with renal failure, severe acidosis, or electrolyte derangements. Continuous veno-venous hemofiltration may be used if the patient is hemodynamically unstable, but standard hemodialysis will correct the acidosis more quickly. Serial lactate measurements are a marker of metformin clearance and should be monitored during and after dialysis, as some patients may have rebound acidosis secondary to incompletely cleared metformin and thus require further dialysis. Since metformin is renally cleared, facilitation of renal recovery is key, as many of these patients present in renal failure. Bicarbonate may help to temporarily bridge a patient to dialysis, but should not be considered definitive treatment. If the patient presents with an acute (usually intentional) ingestion within 1-2 hours prior to arrival, activated charcoal should be used — or at least considered — for gastrointestinal decontamination.7,9

Despite such severe metabolic derangements, if patients are aggressively treated they can survive without residual deficits. Interestingly, neither the pH nor the lactate levels are predictive of survival.11

Patient follow up
The patient in this scenario became even more confused and obtunded, then suffered respiratory arrest with bradycardia. She received atropine, bicarbonate, and was intubated. Shortly thereafter, she became hypotensive with systolic blood pressures of about 70. Fluids and vasopressors were initiated, and the patient was transferred to the ICU for CVVH with bicarbonate buffer. The patient's acidosis had a nadir of 6.56 and recovered to 7.4 24 hours later. After 72 hours of CVVH, 8 days in the ICU, and an 11-day hospital stay, she was discharged neurologically intact, with normal renal function, and fully functional. Her diagnosis: Therapeutic metformin use with acute renal failure caused by urosepsis.

Summary
Metformin toxicity is an easily-missed clinical diagnosis in a patient with severe lactic acidosis and a severely depressed pH with decreased renal function. Prompt recognition leading to emergent dialysis can be lifesaving with good outcomes.