Who Art Thou? Neck Swelling!

Case Report
A 14-year-old female of Middle Eastern descent with history of hypothyroidism, vitamin D deficiency, and iron deficiency anemia presented with a 3-week history of right neck swelling and pain. Initial evaluation at an urgent care prompted a diagnosis of lymphadenitis, and clindamycin was prescribed (discontinued after 4 days due to GI intolerance). With persistent swelling and worsening pain, she presented to a pediatric ED, where her vital signs were unremarkable and she was noted to have swelling and tenderness over the right anterior cervical lymph nodes. An ultrasound of the neck showed a cluster of enlarged lymph nodes without abscess formation. Laboratory workup including a CBC with differentials was unremarkable. With positive EBV titers, a diagnosis of infectious mononucleosis and acute cervical lymphadenitis was made, and cephalexin prescribed (discontinued after 3 days due to GI intolerance).

On the 8th day after initial presentation she followed up with her primary care provider for persistent swelling and pain and attested to difficulty in flexing and extending her neck secondary to pain. A purified protein derivative test and a chest radiograph to evaluate for tuberculosis were non-contributory.

When evaluated by a hematologist 4 weeks after onset of symptoms, there was no concern for a malignancy, but with significant swelling and tenderness she was sent back to the ED for evaluation. In addition, she reported 3 pounds of unintentional weight loss as well as difficulty opening and closing her mouth secondary to pain, and pain behind the right ear. She had remained afebrile throughout her presentation.

On arrival to the ED, her vital signs were again unremarkable. After pain control, laboratory work was obtained, which showed no evidence of malignancy, inflammation, or infection.  A repeat neck US demonstrated multiple enlarged lymph nodes without central necrosis, and abscess formation in the right anterior and posterior cervical chain (Image 1). She was started on intravenous antibiotics, pain medication, and admitted for further management.

Image 1. Ultrasound of the neck 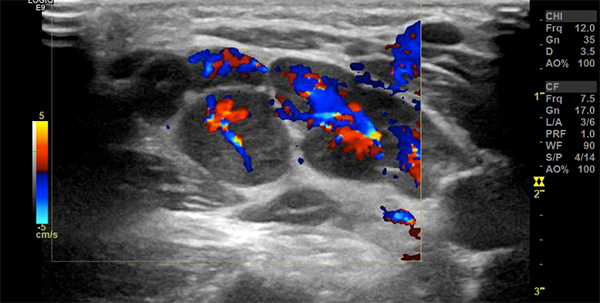 With persistent pain despite treatment, a third US neck demonstrated a progression in the size and number of non-necrotic lymph nodes with hyperemia, but no evidence of fluid collection or abscess. Studies including Bartonella PCR, atypical mycobacterial pathogens, and TB quantiferon were negative. A CT scan of the neck was performed, showing right sided lymphadenopathy with minimal soft tissue stranding along the posterior neck, suggestive of inflammation with no abscess formation (Image 2). A biopsy of the lymph nodes was  performed and a rheumatologic workup was positive for  antinuclear antibody and extractable nuclear antigen. Chest radiograph and abdominal US to rule out sarcoidosis were negative.

Image 2. CT scan of the neck 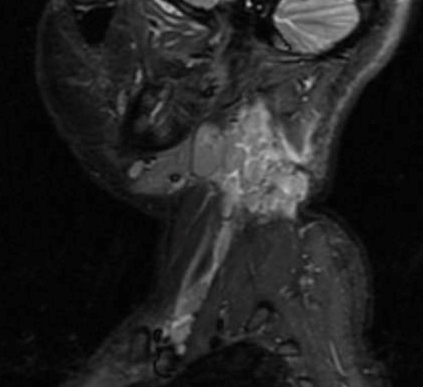 Post biopsy – despite surgical debulking – she had several large (2-3 cm), painful lymph nodes in the right posterior cervical chain. Pain worsened and she reported no relief despite opioids for pain control. On hospital day 6 she further developed restriction of motion of her right arm and decreased sensation over her right side shoulder and biceps, consistent with neuropathic pain. Neck MRI demonstrated a conglomerate of large enhancing lymph nodes in the neck, supraclavicular and right paratracheal region in close proximity to the brachial plexus (Images 3, 4). 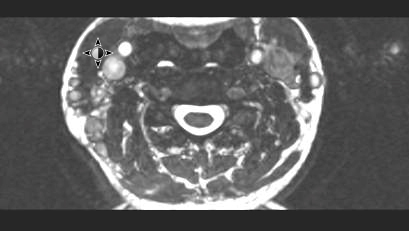 Histopathology reports showed histiocytic necrotizing lymphadenitis. Oral steroids were started; pain and lymphadenopathy resolved and she was discharged home to follow up with rheumatology, with a final diagnosis of Kikuchi-Fujimoto disease (a rare, benign, self-limiting, non-caseating granulomatous disease of cervical lymph nodes with an unknown etiology).

Take-Home Points
1. While infectious etiology should always be considered for unilateral neck swelling, the differential diagnoses need to be broad (neoplastic processes, chronic inflammatory conditions, and autoimmune causes).
2. Lymph node biopsy should be considered early for lymphadenitis/lymphadenopathy not responding to antibiotics.
3. Awareness of common and uncommon etiologies of unilateral neck swelling enables the EM/PEM physician to initiate the most appropriate evaluation and referrals.

The Future of EMRA

Matt Rudy, MD 02/14/2015
The Future of EMRA “Prediction is very difficult, especially about the future.” Both baseball legend Yogi Berra and Nobel laureate Neils Bohr are credited with versions of this saying. Regardless of