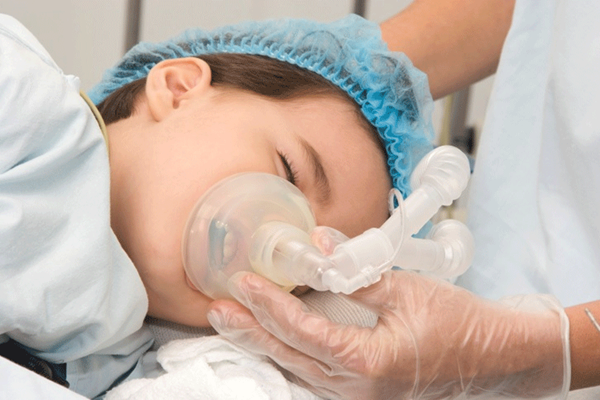 In the emergency department, we perform minor surgical procedures and invasive tests on children every day. Intravenous procedural sedation is often used to facilitate these procedures and needed studies. Every sedative medication has the potential to result in loss of airway protection, cardiopulmonary compromise, and all except intranasal medications require the added trauma of using a needle in an already terrified, apprehensive, and often screaming child. Nitrous oxide administration is a reasonable alternative. Nitrous oxide (NO) has been used for decades in pediatric dentistry, and is largely viewed as effective and safe.1 It is an odorless, tasteless gas that produces dissociative euphoria and results in amnesia and analgesia appropriate for performing minor emergency procedures in children.2

When nitrous oxide is inhaled at levels below 50%, patients maintain airway protective reflexes and do not require fasting or post-procedure monitoring.3 This is in contrast to sedatives such as propofol or ketamine, which provide much deeper sedation, and require post-procedural monitoring. Typically a mask with a good seal is initiated at 30% nitrous/70% oxygen, and increased to 50% nitrous/50% oxygen until effective. Nitrous oxide reaches equilibrium in the brain within minutes and provides its peak effect at approximately 5 minutes from the start of administration.4 Due to the low blood-gas solubility coefficient of nitrous, it also has a quick offset within 4-5 minutes from removal.4,5 Compared to propofol, nitrous has similar clearance after administration, but has the additional benefit of not producing respiratory depression (see Table 1).4-6 This makes it a very attractive agent for use in the emergency department. Its primary advantages over other agents include its quick on and off sedation and that it does not require an IV.

Some studies have shown that nitrous alone is not adequate for analgesia, but should primarily be used as an anxiolytic. It is best used in conjunction with local analgesia such as nerve blocks or local lidocaine infiltration for laceration repair.3 In the right patient, it is an appropriate form of sedation for procedures including peripheral IV insertion, lumbar punctures, laceration repair, incision and drainage, reduction and splinting of fractures, among others.

In general, nitrous oxide is well tolerated. The gas has anxiolytic, amnestic, and mild-to-moderate analgesic properties. Several studies have shown that adverse events are rare, but can occur in up to 10% of children. These are generally mild and consist of nausea and sometimes vomiting post sedation.2 Luhmann and colleagues compared nitrous oxide to midazolam in a randomized controlled trial looking at anxiety relief during laceration repair in children aged 2-6 years. This showed that nitrous oxide use had fewer adverse effects and faster recovery times.7 In the same study, they secondarily found that rates of ataxia, dizziness, and crying were higher in the midazolam group compared to the nitrous oxide group. All of these adverse reactions can be very distressing to an already traumatized patient and parent.

Another well-known adverse effect of NO is post-sedation headache. This is caused by diffusion hypoxia, and generally results when gas administration is discontinued. As nitrous oxide rapidly diffuses back into the alveoli there is a decrease in alveolar oxygen concentration. This can be avoided by administering 100% oxygen through the circuit for 3-5 minutes after nitrous oxide is discontinued so that the nitrous can be exhaled and eliminated.8 During sedation, ventilation remains intact, and thus pCO2 does not tend to increase, but hypoxia can occur if the oxygen to nitrous oxide ratio is too low.3,9 Thus, having adequate equipment for gas administration and elimination is a necessity for any emergency department wanting to use nitrous oxide for procedures.10

When used in otherwise healthy children, nitrous oxide has very little significant effect on hemodynamics. In a small study of 12 infants by Hickey and colleagues, it was determined that nitrous oxide led to an average heart rate decrease of 9%, and a mean arterial pressure decrease of 12%.11 This mild systemic hemodynamic depression is unlikely to be significant except in those infants with severely depressed cardiovascular function.

There are absolute contraindications for administration of nitrous oxide in certain patients. These include those with intracranial hypertension, pneumothorax, or other disorders that involve an accumulation of gas in a closed area (i.e. intestinal ileus or sinusitis), as well as unconscious patients with inability to protect their airway.12

Many emergency departments have established equipment for the administration of inhaled nitrous oxide. Per the American Academy of Pediatrics, inhalation equipment that delivers nitrous oxide must have the capacity of delivering 100% oxygen, but never less than 25% oxygen at an appropriate flow rate for the size of the child.10 Studies done on children using nitrous oxide generally use a 50% concentration of nitrous to oxygen, though sometimes as high as 70% nitrous to 30% oxygen.9 Equipment that delivers variable ratios of the two gases with a delivery system that covers the mouth and nose must be used in conjunction with a calibrated and functional pulse oximeter.10

In dentist offices, nitrous oxide has traditionally been self-administered through a device that involves a demand valve (only delivering the gas with negative inspiratory pressure). The benefit of this delivery mode is that the patient will not take deep enough breaths to administer more gas when adequate sedation is achieved. This method is appropriate for adults or older children, though this is less feasible in young children due to their inability to cooperate with instruction or produce the adequate amount of negative inspiratory pressure. Therefore, a continuous flow system with the mask held by a parent is what is usually used with small children and has been shown to be safe.13 It is important to use a scavenging device to avoid staff and parent incidental exposure.

To increase acceptance of the mask delivering nitrous oxide, dentist offices will often use flavored lip balms or other pleasing odors around the rim of the mask. This is a comfort measure that can increase success for physicians attempting to use nitrous oxide for pediatric anxiolysis in the ED.

Many studies have established the efficacy of nitrous oxide in pediatric patients and it seems reasonable that this could be applied to the pediatric ED. Nitrous provides a dissociative euphoria that would be appropriate for use in patients having to undergo painful emergency procedures. Some departments have already adopted this method of procedural sedation, and through collaboration with anesthesia and emergency physicians, this may become more widespread in the future.