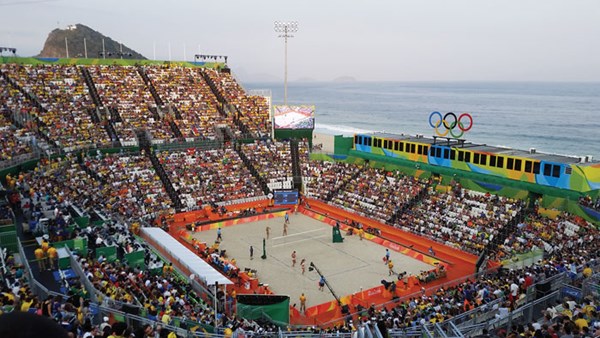 On Doctoring at the Olympics

An Insider's View of Event Medicine

Editor's note: During the Games of the XXXI Olympiad in Rio de Janeiro, Brazil, two adventurous emergency medicine residents served as part of the event medicine team. The experience, they say, opened their eyes to new opportunities.

As I returned to the “Cidade Maravilhosa,” the Marvelous City I had come to know quite well while working for a multinational health care company before attending medical school, I couldn't believe the changes. In a city where one of the seven natural wonders of the world can be found, where visitors flock to the “Cristo Redentor,” where the famous dance “samba” originated, where the largest party in the world – “Carnaval” – takes place, with some of the most spectacular beaches on the planet, Rio was a great choice for the 2016 Summer Games. Amid political, economic, and bioenvironmental catastrophes, Rio proved to be a world-class city worthy of such an event.

On the evening of Aug. 5, 2016, I found myself in the basement of Maracanã, at one time the largest stadium in the world, with colleagues from the University of Miami's Ryder Trauma Center preparing to staff the venue for the Opening Ceremony. While working alongside a seasoned trauma surgeon, we realized our assigned area included the Olympic family members and executive officials from the International Olympic Committee. My surgeon colleague said, “If anyone needs the OR I'll take care of them, otherwise you're in charge!”

On the first day of competition, I was stationed in the Future Arena at the Barra Olympic Park as one of the lead Field of Play (FOP) physicians for Men's and Women's Olympic Handball. Although the majority of the medical team came from various regions of Brazil, our team comprised about 20 professionals from around the globe. The 4-person rotating FOP team included a nurse, physical therapist, dentist, and physician. We were briefed by the medical director of the venue, who offered a tour of the facility and a review of the equipment and temporary resuscitation bay. Before we knew it we were courtside watching over, and responsible for, some of the best athletes in the world. Bright lights, a rambunctious crowd of 10,000+ people, loud music, and high-intensity competition made it very real, very quickly.

Thankfully there were no injuries at handball the first day, but many will recall the egregious lower extremity fracture that occurred at the gymnastics venue. All eyes were on that health care team, and their actions were replayed on TV news reports around the world. This is when I fully understood the difficulty of medical stabilization under intense pressure in an unfamiliar environment.

Although providers can take advantage of multiple online training modules and read The IOC Manual of Emergency Sports Medicine, after watching the gymnastics rescue, it became evident we were underprepared. Despite being qualified professionals, we realized that working with unfamiliar equipment, in an unfamiliar environment, with various languages, and unfamiliar people was extremely challenging. While this may be common to international sporting events, it is a recipe for disaster.

“We are working with world-class athletes and we need world-class performance, nothing less,” Dr. Luis Japiassu, the venue medical director, reminded us.

Under his guidance, we simulated traumatic events, practiced mobilizing our radio communication system and bringing appropriate evacuation equipment on field. We practiced cervical collar placement, pelvic binder placement, and our egress based on the severity of the trauma. We simulated dual athlete injury scenarios. We developed hand signals so the team who stayed courtside knew which equipment to bring to the accident scene after initial evaluation by the FOP physician. Thankfully, there were no major injuries.

“Brian, grab the AED and come with me!” said Dr. Antonio Marttos as he motioned toward the seating for dignitaries and heads of state at the Opening Ceremony for the Olympic Games, pointing specifically toward a tall, gray-haired man in a sharp suit. A well-known politician was complaining of chest pain, and now we were his doctors. He was fine, and luckily, we didn't have to use the AED. This was my introduction to Rio de Janeiro and the Olympic Games.

It was our job on this day to prepare a mini ICU in a small room within the heavily guarded VIP presidential viewing area at Maracanã Stadium. The show was like nothing we'd ever seen, a palpable sense of jubilation was in the air, and the emergency medicine on that day, thankfully, was quiet.

I had never heard of Equestrian eventing, or jumping, but Dr. Marttos told me those athletes have high potential for injury. Doctors, nurses, and physical therapists were strategically distributed across the 6 km eventing course. During competition riders sat upon their horses, galloping, jumping over obstacles, splashing through rivers, and occasionally falling at full speed from the height of the horse. Our teams of three would rush to the downed rider as a veterinarian tended to the horse. ABCs, c-collar, backboard — the potential for intervention loomed. Our managers, Brazilian physicians themselves, were clear: “Athletes don't die at the Olympic Games.” We had our laryngoscopes, RSI meds, ACLS bag, chest tubes — we were ready, but for the most part we didn't use them.

Jumping is the Equestrian event where the horse, at full speed, jumps over obstacles in the confines of a small stadium. During an awards ceremony one of the horses was startled, causing her to kick a trainer in the head, knocking him unconscious and inflicting a large scalp laceration. Our team rushed to the scene, stabilized the c-spine, loaded him into the ambulance, and sent him to a local hospital for imaging.

My favorite days were those spent working at the rowing venue. Dr. Rishi Rattan, a friend and a trauma surgeon, asked for an extra doctor, and I quickly jumped at the opportunity. Positioned by the finish line, we were able to see the grueling finishes up close. I rowed and coached for 8 years, and I rarely witnessed an emergent medical event. In Rio that was no different. What was different was the landscape — situated in a lagoon known as Lagoa Rodrigo de Freitas, with Christ the Redeemer looking down from his perch atop Corcovado Mountain, Olympic athletes at the peak of their career were striving for gold — I was fortunate enough to be a part of it all.

Know Before You Go

Before signing up for event medicine, we encourage purposeful preparation. The sports arena is akin to the ED in many ways: there's a ticking clock, high emotions, family and friends; there is pain and potential for disaster.

At Mount Sinai, residents walk the ED with a checklist before each shift, making sure the right equipment is in the appropriate place, is functioning, with back-up nearby. Before a resuscitation, roles are determined and communicated: who will place the monitors, who will give the medications, who takes the airway, who will gain vascular access, and who is in charge. These simple cultural habits, among others, make the difference between chaos and the calm, efficient delivery of cutting-edge emergency care. Similar habits and preparation are useful in event medicine.

Dr. Antonio Marttos, a kind and happy family man from Brazil, is our attending at the Ryder Trauma Center in Miami, Florida, where he is the Director of the William Lehman Injury Research Center and a surgeon specializing in trauma, surgical critical care, and telemedicine. Dr. Marttos was the Manager of Emergency Medical Services and Multiple Casualty Incident Response at the Olympic Games, and he invited us and several other physicians and nurses to work with him at the Games. We are forever grateful. We would also like to thank our residency program directors who gave us the flexibility to attend the Games.