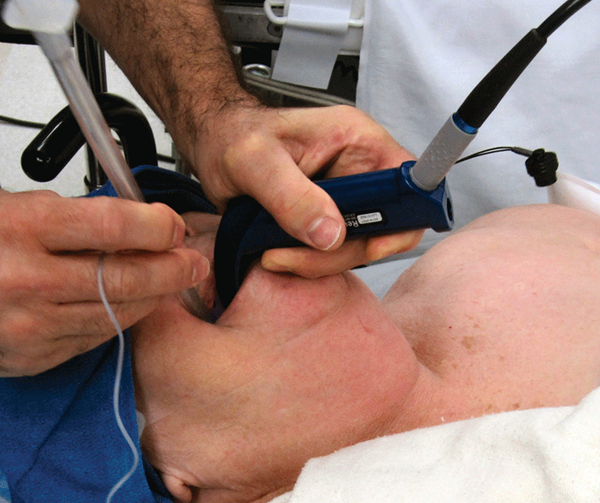 Opinions and History on Laryngoscopy

Dr. Pacey's injection of video laryngoscopy into airway management was actually an extension of the previously defined technique of indirect laryngoscopy: the use of an optical instrument to visualize the larynx without requiring the creation of a direct line of sight. This had previously been achieved with laryngoscopes utilizing lenses and mirrors; however, this was revolutionized by the technological advances of the last 10 years. Now, the charged metal oxide sensor (CMOS) video camera (commonly utilized in cellphones and other electronic devices) has become the most popular modality of indirect laryngoscopy.2 These relatively affordable video cameras have subsequently enabled manufacturers to push the envelope, now adding cameras to the ends of both hyperangulated and standard geometry laryngoscope blades. As a result, we have fantastic new tools in our arsenal, but we ought to be more conscientious when discussing airway management with our colleagues.

First, a two-point definition: A traditional laryngoscope is one that lacks a video camera, or any other optical aid.1 A traditional laryngoscope is always used to perform the technique of direct laryngoscopy (DL — see the discussion in the next section). The two most common direct laryngoscopy tools are the Macintosh blade (curved) and the Miller blade (straight). While varying blade shapes require slightly different procedural maneuvers, both achieve the same result: the creation of a direct line of sight from your retina to the patient's larynx.3,4

A video laryngoscope is one that has a video camera built into it. It can be of a shape that retains the standard geometry of the traditional laryngoscope, or be of a hyperangulated shape like the original GlideScope.1 It is the shape of the blade that determines the technique required for use.

DL describes the method in which a laryngoscope is used to displace the mandible and soft tissues of the oropharynx to create a direct line of sight to the patient's larynx.3,4 The laryngoscope consists only of a handle, a light source, and a blade (most commonly Macintosh or Miller). The procedure begins with insertion of the laryngoscope blade into the patient's mouth and obligates adequate tongue control, which is most often achieved with a sweeping motion from right to left after entering the mouth with the blade. Once tongue control is established, the next challenge is identifying landmarks. A stepwise approach should be taken to first identify the posterior oropharynx and uvula to ensure the midline has been located. From there, the blade is advanced while displacing soft tissues anteriorly using a mild amount of force until the epiglottis is visualized. At this point, straight blades are used to displace the epiglottis anteriorly, while curved blades generally pass anterior to the epiglottis and engage the hypoepiglottic ligament to elevate the epiglottis. 3,4 Use of either blade achieves the same result – exposure of the larynx prior to delivery of an endotracheal tube. 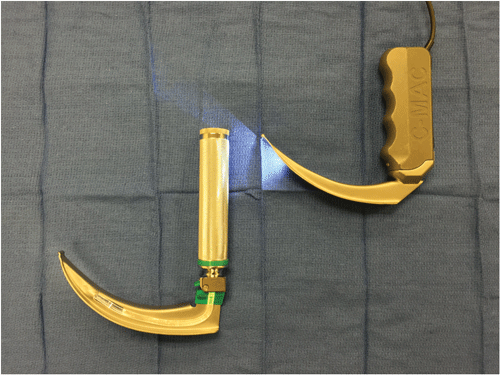 ]Image 1. On the left is a traditional Macintosh laryngoscope, with standard geometry. To the right is a video laryngoscope device which also maintains the standard curvature. 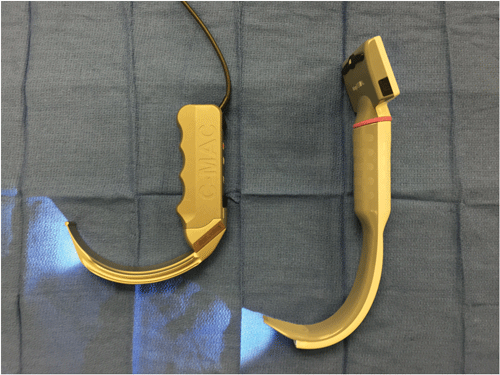 Image 2. Two examples of hyperangulated video laryngoscope devices. Note the difference in curvature of the blades when compared to the devices in image 1. Both curvatures can be used in video laryngoscopy, but the techniques are not the same.

VL is not one homogenous technique: The shape of the blade dictates how it must be wielded in the hand. The term VL in and of itself only means that you are passing the tube under video visualization.1

A standard geometry blade equipped with a CMOS camera should have force applied to it in exactly the same way, with the same stepwise traditional approach as direct laryngoscopy, outlined above. After these devices are introduced into the pharynx, they give the operator the option to deliver the endotracheal tube under direct visualization, or with video guidance. In other words, the operator can perform DL or VL, despite the fact that the technique used to obtain the view is the same. The operator may choose when to direct his or her attention to the video monitor or simply not use it at all. Furthermore, the operator may fall back to direct visualization (i.e., DL) if the screen is conquered by copious secretions or bleeding.2

Hyperangulated laryngoscopy blades obligate indirect laryngoscopy (most often video) and truly require a different technique for use than a standard geometry blade. The handle of the blade is grasped in the same manner; however, the blade should be inserted in the midline of the mouth. As soon as the tip of the blade passes the teeth, the operator's attention should be focused on the video monitor.4,5 The device should continue to be inserted so as to follow the curve of the pharyngeal structures in the midline.4 Again, sequential identification of midline structures such as the tongue and epiglottis is key. This maneuver should require only minimal lifting force.

The major consideration of hyperangulated video laryngoscopy is endotracheal tube delivery.4,5 Rigid metal stylets (with a 60 ° curve) are most often recommended and utilized, but if these are not available, the operator may bend a malleable stylet in a similar shape.6 Novice operators should practice tube delivery in simulation, as it is not the same as with DL or standard geometry VL (i.e., the techniques in which a straight line to the glottis exists). When performing VL with a hyperangulated blade, the tube, just as the laryngoscope, must pass around the curvature of the airway.5 In other words, the tube cannot simply be “pushed” into the trachea when it reaches the glottis. Most providers will withdraw their stylets several centimeters prior to advancing the endotracheal tube to facilitate easier passage through the larynx and into the trachea.4

Video laryngoscopy is here to stay, and as a community, we need to be more deliberate when describing our airway management procedures. As is evidenced above, there are profound, fundamental differences in video laryngoscopy techniques. Using a video-assisted intubating device is not synonymous with a hyperangulated blade. It is crucial to recognize these differences and, furthermore, to impart this information to each new generation of airway management novices. Our diligence in clarity informs the practice of trainees and helps to elevate our level of patient care.