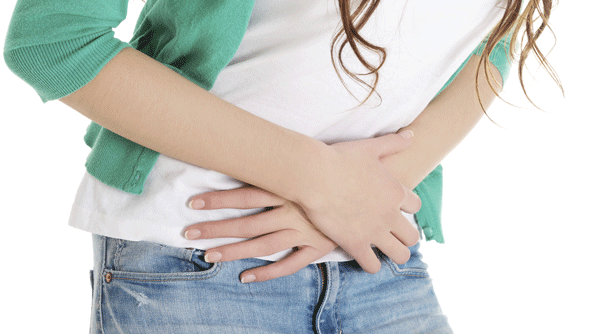 Ovarian Torsion in the Pediatric Population

It's the start of your afternoon community pediatrics shift and you are seeing a 7-year-old girl who started having acute RLQ pain followed by vomiting. She is afebrile, but pale with a tender RLQ. Her appendix is not visualized by ultrasound, but the right ovary is enlarged with a few peripherally displaced follicles. There is minimal flow peripherally and no color flow in the center. The patient is transferred to the closest tertiary health care center with pediatric surgery capabilities and undergoes diagnostic laparoscopy, where torsion is confirmed. Detorsion without ovarian excision results in a full recovery.

Few studies describe the characteristics and incidence of ovarian torsion in the pediatric population, and there is no national data regarding demographics of this pathology. The largest study population is 82 patients in one study.1

One cited estimate of ovarian torsion in adult women is 2.7%. Pediatric patients account for approximately 15% of all cases of ovarian torsion.2 One study in the journal Pediatrics estimated the incidence at 4.9 per 100,000, based on a sample of patients from the Healthcare Cost and Utilization Project Kids' Inpatient Database.3 Immediately pre-menarchal girls seem to be the predominant age group, but 13% of cases in the aforementioned review were under 11 years of age, with a mean age of 14.5 years old. The bottom line is that ovarian torsion is rare, but should still be considered in your differential.

Ovarian torsion is the twisting of the ovary on its vasculature, leading to obstruction of venous outflow, edema of the ovary and vascular pedicle, and compromise of the arterial blood supply. This ultimately results in ovarian necrosis if it persists.

In terms of presentation, there are case reports and retrospective reviews with small numbers of patients that describe sudden onset abdominal pain associated with nausea and vomiting as the most consistent presentation of torsion.1 The pain from torsion is usually constant, but patients may have intermittent pain from spontaneous torsion with subsequent spontaneous detorsion. This presentation may account for up to 50% of all patients.1 Associated symptoms may include urinary complaints such as frequency and dysuria.4 Sterile pyuria has also been noted in the urine specimens of girls with ovarian torsion.5

Duration of symptoms can exceed 24-48 hours, so prolonged abdominal pain does not rule out torsion.1 Fortunately, there is data that prolonged symptoms prior to presentation are not indicative of necrosis.4 A majority of patients will have abdominal tenderness, most likely seen in the right lower quadrant, but some patients may not present with tenderness, or only with nonspecific tenderness and pain.1 Torsion is more common on the right side than the left, by a 3:2 ratio. This is believed to be due to the sigmoid colon on the left limiting movement of the fallopian tube and ovary on that side.6, 7

Ovarian Masses and Association with Malignancy

Predisposing factors for ovarian torsion include sudden movements, abrupt changes in abdominal pressure, benign or malignant masses, cysts, as well as elongation of the fallopian tubes or supporting ligaments.7,8

In terms of masses, in the cohort of Guthrie, et al, only 58% of the ovaries were abnormal.3 In younger children with masses, ovarian torsion occurs more from benign cysts or benign neoplasms such as cystic teratomas. In neonates and older children, follicular or luteal cysts are more commonly the inciting causes. These are related to the circulation of higher levels of hormones from either maternal influence or puberty, respectively.8

A retrospective study by Anders and Powell noted that 12 of 22 patients with ovarian torsion had normal ovaries on laparoscopy.4 It is estimated that 40-50% of patients likely have normal ovaries that torse. Another retrospective review from Italy looked at 127 cases finding that torsion occurred in 56.7% of ovaries with functional lesions, 23.3% in the context of a normal adnexa, and 20% on ovaries with benign neoplasm. A literature review in the same paper, spanning some 3000 cases, quotes the rate of malignant neoplasms at 1%, and the same review shows an increase in conservative surgery, defined as not performing oophorectomy.9 When malignancy is the cause of a torsed ovary, it is primarily in postmenopausal women.

The best available evidence shows ovarian torsion is infrequently associated with malignancy; estimates are as low as 0.5-1.8%.3 This is based both on population studies as well as pathological correlates, and it may be reassuring to parents.3,9,10 A possible explanation is that malignancy, as well as PID or endometriosis, is associated with adhesions and inflammation, which may render the ovary relatively immobile.8

Transabdominal ultrasound using the urinary bladder as an acoustic window is the most useful imaging study for the diagnosis of ovarian torsion in children. Ultrasound yields a positive predictive value of 87%, and a specificity of 93%.11 It is often abnormal, with the most common finding being that of an enlarged ovary due to edema and venous engorgement, or the presence of an adnexal mass.11,12 The ultrasound images obtained from the child in the case description exemplify the same characteristics. Figures 1 and 2 represent the right ovary without and with color flow, respectively, and Figures 3 and 4 represent the left ovary. The right ovary is enlarged to 6x4 cm (comparatively, the normal left ovary is only about 2 cm), and there is absence of flow in the middle of the ovary.

Sometimes, the twisted vessels in the ovarian pedicle appear as a whirlpool.

Because the ovaries receive dual arterial supply from the ovarian and uterine arteries, presence of flow on the ultrasound does not rule out ovarian torsion. Even in the case here, the right ovary has some scant peripheral flow. A high resistive index compared to the contralateral side can be a subtle clue to abnormalities in blood flow.

Common CT findings are somewhat nonspecific and include an adnexal mass that may be in the midline or rotated toward the contralateral side of the pelvis. There may also be deviation of the uterus to the side of the affected ovary.11 It is worth mentioning that the gold standard for diagnosis is not any type of imaging, but laparoscopy. Therefore, if the imaging is inconclusive or negative but your suspicion is high, it is worth giving the surgeons a call.

We are taught that ovarian torsion is a time-sensitive diagnosis, but in the study by Anders and Powell, prolonged duration of symptoms was not significantly associated with ovarian necrosis, and mean time of symptoms prior to getting treatment was 76 hours for children with both resected and unresected ovaries.4

The treatment for ovarian torsion is laparoscopy. There are two described approaches: surgical resection of the entire affected adnexa or laparoscopic detorsion without resection and oophoropexy, with or without tissue biopsy. The incidence and risk factors associated with recurrence are unknown.13 Resection of the entire adnexa has obvious impact on fertility, even more concerning due to the possibility of recurrence or bilateral torsion. Though rare, both have been described.14

Resection used to be the preferred approach due to concerns about missing malignant pathology, risk of thromboembolic complications such as pulmonary embolus, or concern that a severely ischemic, black-blue ovary may not be viable.1,3,6 We have already discussed the low rate of malignancy. Similarly, several studies show that the necrotic appearance of a twisted ischemic ovary does not correlate with lack of function of the ovary post detorsion.6,7,15 As for thromboembolism, the only reported case of PE in the pediatric age group involved a thrombosis of the right common iliac vein after left ovarian detorsion and cystectomy.16 There are two cases of PE described in adults after bilateral salpingo-oophorectomy, not related to torsion.9 It seems more of a theoretical concern compared to the more widespread concern of decreased fertility post-resection.

Whenever possible, premenopausal women with a viable ovary and no suspicion of malignancy should have detorsion and oophoropexy performed without ovarian resection. However, if there is concern of malignancy, salpingo-oophorectomy should instead be performed. There is always a risk of irreversible ischemic changes to the adnexa despite detorsion and postoperative care instructions should include signs and symptoms of peritonitis from a retained necrotic ovary.13 Thus, the standard of care currently is laparoscopy with detorsion of the ovary. Studies have shown good functional outcomes without significant complications. 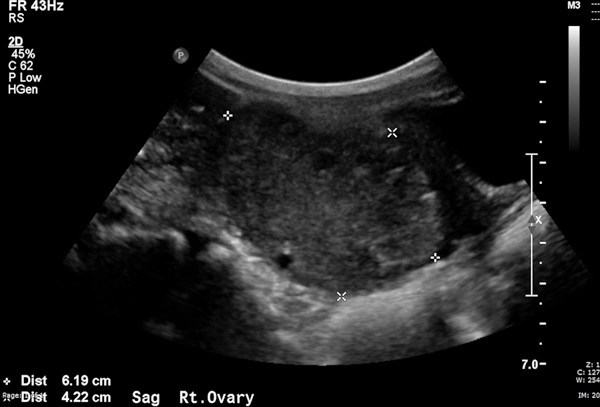 Figure 1. Ultrasound image of right ovary, with measurements indicating it's size. This ovary is enlarged, measuring at about 4 cm by 6 cm. 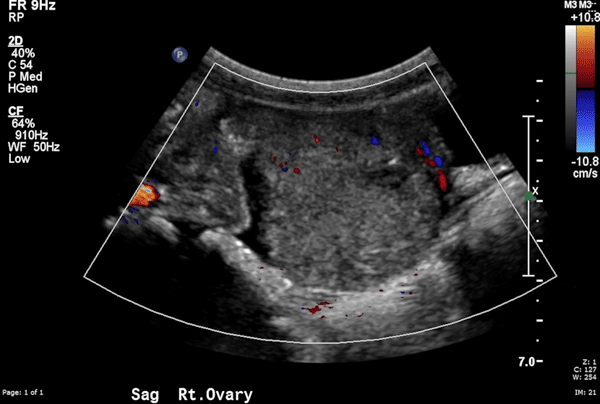 Figure 2. A color flow Doppler image of the right ovary. 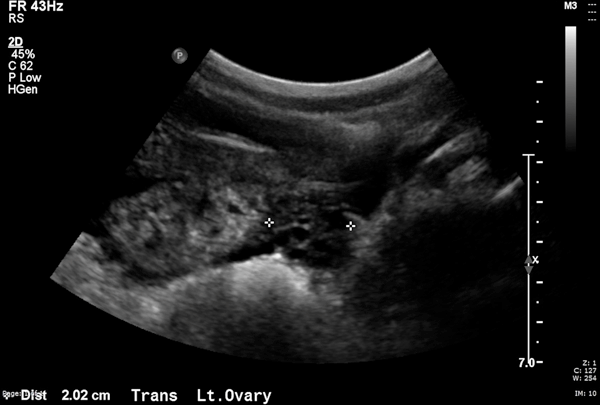 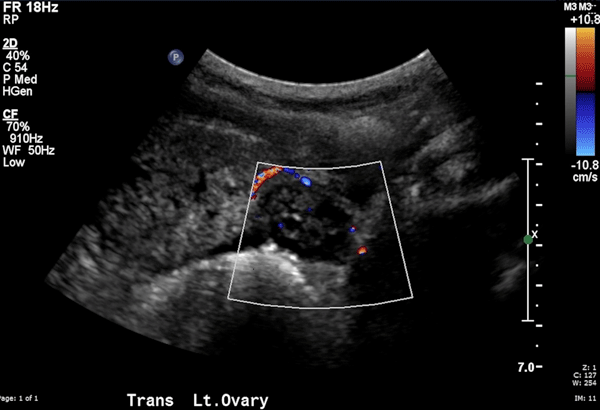 Add This Diagnosis to Your Differential

In summary, ovarian torsion is rare and the presentation can be nonspecific, which makes ovarian torsion a dangerous entity that can go easily unrecognized with grave consequences for the child. Multiple cases of delayed diagnosis of ovarian torsion, often requiring multiple visits to clinics and emergency departÂ­ments, have been reported.17 Repeat visits for abdominal pain, particularly in a short span of time, should prompt consideration for torsion.