Penile Mondor’s disease (PMD) is a benign, self-limiting thrombophlebitis of the superficial dorsal vein of the penis.

It typically presents acutely as a subcutaneous band on the dorsal penis that is often described as hard, rope-like and accompanied by pain.

PMD is thought to be a rare, self-limiting condition characterized by thrombosis of the dorsal vein of the penis. Recent literature has questioned the rarity of this condition and suggested that the low incidence may be related to under-diagnosis and under-reporting.

Although the pathophysiology is not exactly known, PMD is commonly seen in sexually active men between 21 and 70 years old and is thought to most often be caused by trauma during sexual intercourse.1 Diagnosis can often be ascertained through history and physical exam, but it may be important to confirm with Doppler ultrasound to rule out other fibrotic lesions of the penis, including sclerosing lymphangitis, Peyronie’s disease, and penile angioedema.

A 30-year-old male with no significant past medical history presented to the ED with complaints of penile pain for 4 days. He stated he was in the process of urinating when he developed the sudden onset of pain and swelling at the base of his penis. He had associated intermittent pain with urination. He reported no fever, vomiting, abdominal pain, changes in bowel habits, hematuria, urethral discharge, or testicular pain or swelling.  He had no past medical history of STI and no known exposure to STI. The patient  is sexually active with one female partner; they are monogamous and do not use regular contraception.

On physical exam, he had moderate tenderness to palpation at the base of the dorsal penis with mild perineal swelling and a palpable subcutaneous rope-like structure along the dorsum of the penis. Urinalysis and gonorrhea/chlamydia screens were negative. Ultrasound of the scrotum and penis demonstrated superficial occlusive venous thrombosis of the penile dorsal superior vein with normal appearance of both testicles and no testicular mass or torsion at the time of imaging (Figures 1 and 2). 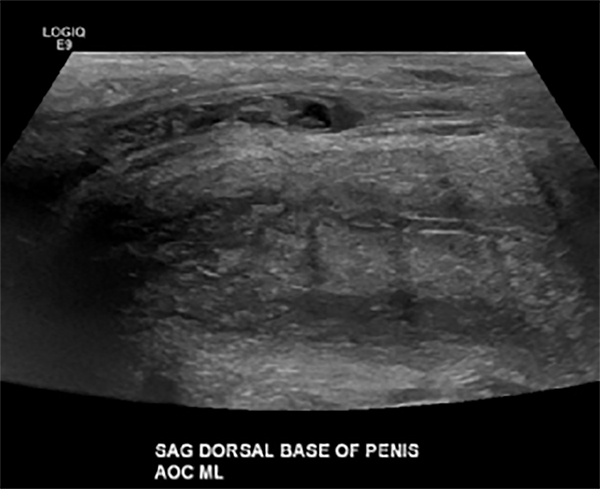 The patient was discharged home with recommendations by urology to take 325 mg aspirin daily for 14 days.

Discussion
Penile Mondor’s disease typically presents acutely as a subcutaneous band on the dorsal penis with or without pain. Although the pathogenesis of the condition is not clearly understood, several etiologic factors have been postulated. PMD is thought to most often be caused by trauma during sexual intercourse, resulting in endothelial injury and intravascular coagulation.1 Other proposed causes include penile trauma, prolonged sexual abstinence, local infections, a history of sexually transmitted infections, thrombophilia, repair of inguinal hernia, orchiopexy, varicocelectomy, use of intracavernous drugs, Behçet’s disease, tumors in the pelvic region, migratory phlebitis due to paraneoplastic syndromes, venous occlusion caused by filled bladder, abuse of intravenous drugs, and tendency of thrombosis.6

While the prevalence is estimated to be approximately 1.4%, it is believed to be an under-reported and under-diagnosed medical condition mostly affecting sexually active men between 21 and 70 years old.3

Diagnosis can often be established through history and physical exam, as patients typically present with pain during erection and palpable swelling and hardness on the dorsal surface of the penis. There are no laboratory tests or markers specific to the diagnosis, but it may be important to confirm with Doppler ultrasound to rule out other fibrotic lesions of the penis, including sclerosing lymphangitis, Peyronie’s disease, and angioedema. It is important to note that sclerosing lymphangitis is characterized by thickened and dilated lymphatic vessels with serpiginous morphology and Peyronie’s disease involves well-defined, fibrotic, and calcified plaques involving the tunica albuginea of the penis.5

Since PMD is a self-limiting condition, treatment often entails conservative management with patients being instructed to avoid sexual activity until symptoms resolve, usually within 6-8 weeks. Medical therapy may also be indicated, which typically involves aspirin or oral anticoagulants until the thrombophlebitis resolves. If necessary, nonsteroidal anti-inflammatory medications may be added to the treatment regimen for pain control and to reduce the inflammatory process. Appropriate management of penile Mondor's disease does not lead to permanent deformation of the penis or erectile dysfunction, although prompt diagnosis may relieve some of the psychological stress experienced by affected individuals.5