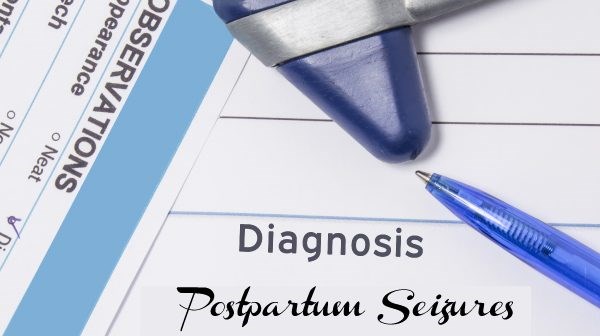 A 25-year-old female presents to the ED after experiencing 3 seizures at home. She was discharged 1 day prior after a primary cesarean section because of failure to progress. She awoke that morning with a headache and worsening blurry vision that progressed to blindness just prior to seizures. She received midazolam from EMS. Upon arrival, she was afebrile with a blood pressure of 137/71 mmHg. Emergency physicians became aware of her recent pregnancy and subsequently administered IV magnesium sulfate. Physical exam revealed small lacerations to the upper lip, bite marks on the lateral tongue, and bilateral periorbital edema. She appeared post-ictal without focal neurological deficits. Her creatinine was elevated at 1.3 mg/dL, uric acid was 8.0 mg/dL, and urinalysis was positive for protein. The remainder of her work-up was normal. During pregnancy, she did not have any features suggestive of pregnancy-induced hypertension.

The differential for seizure is broad (Table 1). Although eclampsia and HELLP syndrome are the some of the most worrisome disorders associated with pregnancy-induced hypertension (PIH), other causes must be considered. Eclampsia refers to a new-onset, generalized, tonic-clonic seizure that occurs in women with pre-eclampsia. These are diagnosed after the 20th week of gestation, but the risk of occurrence remains up to 6 weeks postpartum. Complete blood count, electrolytes, renal function, liver function tests, magnesium level, fibrin degradation products, urinalysis, and uric acid should be ordered in all women suspected of having PIH or any of its complications. Common prodromal symptoms include headache, dizziness, visual changes, peripheral edema, and upper abdominal pain.

The pathophysiology of eclampsia is poorly understood, but many theories exist. Eclampsia leads to posterior reversible encephalopathy syndrome (PRLS), which is characterized by confusion, headache, seizures, and vision loss with areas of brain edema often seen on MRI.

The two main theories of PRLS associated with eclampsia are based on hypertension. The first states that hypertension causes a dysfunction of the auto-regulatory system in cerebral circulation, leading to brain edema and, ultimately, the eclamptic seizure. The second theory proposes that hypertension activates the auto-regulatory system, which leads to vasoconstriction of the cerebral circulation with hypoperfusion, ischemia, and fluid leakage.

Before medicating, first maintain airway patency and place the patient in the left lateral decubitus position. Raise the head of the bed and pad the bedrails to protect from seizure-related trauma.

The first-line anti-epileptic in eclampsia is magnesium sulfate. Begin with 4-6 g of IV magnesium sulfate over 10-15 minutes followed by an infusion at 2 g per hour. This infusion should then be continued for a total of 24 hours while the patient is admitted to labor and delivery. If IV access is not available, administer 5g in each buttock until the seizure stops.

Initiate anti-hypertensives if BP remains >160/110 mmHg. Blood pressure management is imperative in this population to prevent stroke, a leading cause of death and disability in eclampsia. The goal diastolic blood pressure is 90-100 mmHg to prevent hypoperfusion of the placenta.

This patient was admitted to L&D for continuation of a magnesium sulfate infusion for 24 hours. She became hypertensive, and was managed with labetalol 200mg PO, twice per day. Her serum magnesium remained within the therapeutic window, and she did not develop symptoms of magnesium toxicity. On initial labs, her serum creatinine had doubled since the day of delivery and her serum uric acid was elevated, indicating poor renal clearance. Her kidney function returned to normal and she was discharged home after 2 days.