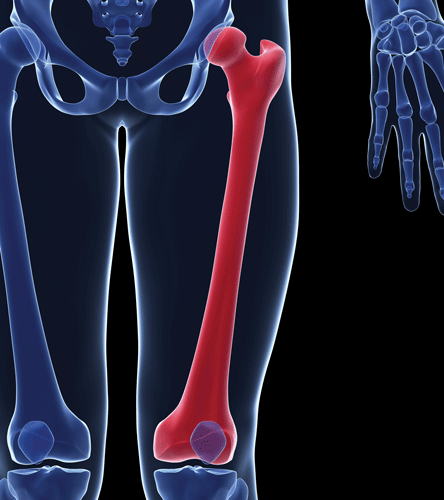 Practical Tips: When and How to Use a Femoral Nerve Block

An 82-year-old female shows up  in your ED with severe hip pain    after a fall at home. You already know what the x-ray is before you see it – femoral neck fracture. It's a fairly common scenario, but this patient has already received two rounds of morphine 4 mg IV with minimal pain relief, and her blood pressure is now 100/55. With her continued pain and borderline-low blood pressure, what's the next best step? Have you considered an ultrasound-guided femoral nerve block?

The patient is positioned supine with the affected extremity in slight abduction and external rotation, as tolerated. A high-frequency linear probe is used to visualize the femoral nerve and artery by placing the probe in the inguinal crease, parallel to the inguinal ligament, with the probe marker to the patient's right. The femoral nerve is located within a triangle bordered by the fascia lata and iliaca anteriorly, the femoral artery medially, and the iliopsoas muscle posteriorly. The nerve is hyperechoic, usually oval or triangular shaped, and is located an average of 2-6 cm beneath the skin surface.

Using sterile technique, make a skin wheal and then insert the long needle in-plane at the lateral edge of the probe, aiming for the space behind the nerve (or for the deep border of the triangle, if the nerve is not visualized). Visualize the needle on ultrasound as you advance toward the nerve. Often you will feel a “pop” as the needle tip passes through the resistance of the fascia iliaca.

Once the needle tip is positioned at the lateral aspect of the nerve, pull back to aspirate, and then slowly inject 1-2 mL of local anesthetic to confirm placement of the needle tip. Correct placement is verified by seeing the local anesthetic surround the nerve, which enhances its visualization on the ultrasound monitor. If the anesthetic is only seen superior to the nerve, the needle may not have penetrated the fascia iliaca, and should be repositioned prior to further injection. In an adult patient, a total of 10-20 mL of local anesthetic is injected once proper placement is confirmed. As you inject, the nerve will often become more visible as it lifts off from the iliopsoas muscle, surrounded by anesthetic. Anesthesia is usually obtained within 10-20 minutes.1,2

A variation of the femoral nerve block, termed a “3-in-1 block,” can be utilized to provide greater anesthesia to the thigh, and is useful in severe proximal injuries. In addition to blocking the femoral nerve, the 3-in-1 block also anesthetizes the lateral femoral cutaneous and obturator nerves. Anesthesia of all three nerves can be achieved in the same procedure by spreading the local anesthetic more proximally and using a larger total volume (20-30 mL). To spread the anesthetic, have an assistant apply downward pressure a few centimeters distal to the site of injection. Pressure is sustained for 30-60 seconds after the injection is completed to ensure proximal spread.1,2

What's the evidence?
The argument for using a femoral nerve block to provide analgesia to patients with hip fractures derives from its relative ease and efficacy in providing high-quality pain control, as well as lack of adverse effects commonly seen with opioid pain medications. A randomized controlled trial published in Academic Emergency Medicine in 2013 evaluated the use of the femoral nerve block as an adjunct to opioid analgesics.3 Adults with moderate to severe pain were randomized to receive either IV morphine with an ultrasound-guided 3-in-1 femoral nerve block, or IV morphine with a placebo injection. Thirty-six patients were randomized, and a physician co-investigator performed ultrasound-guided injection of either bupivacaine or normal saline. Both the patient and the emergency physician caring for the patient were blinded to the treatment arm, and additional analgesia administration was at the discretion of the treating physician over the four-hour study period. Results showed a significant decrease in pain intensity, less parenteral opioid administration, and no difference in adverse effects in the femoral nerve block group compared to the standard care group.

Another study, published in Annals of Emergency Medicine in 2003, also compared the femoral nerve block to standard care (IV opioids), extending the study time period to 24 hours from the time of block, or to the time of surgery, whichever came first.4 Patients receiving the 3-in-1 nerve block recorded a faster time to reach the lowest pain score, and required significantly less morphine per hour compared with control patients. Multiple physicians at different levels of training administered the nerve blocks, and no adverse effects were identified.

A femoral nerve block is feasible to perform, even in a busy emergency department. A prospective observational study published in the American Journal of Emergency Medicine in 2010 demonstrated a median time of 8 minutes to perform the procedure. Included in this time was five minutes of manual pressure to achieve 3-in-1 block, making the actual procedure time even shorter. All procedures required only one attempt, and there were no complications.5 Notably, this study included a convenience sample of only 13 patients, and only two practitioners (an ultrasound fellowship-trained EM attending and an EM resident) administered the nerve blocks. However, after only a 30-minute training session, the EM resident was able to perform the nerve block with a 100% success rate.

Though larger randomized controlled studies are required to confirm these findings, the literature suggests that after a short training session, EM residents can become proficient at ultrasound-guided femoral nerve blocks. With a low complication rate and minimal side effects, a nerve block is ideal for patients with persistent pain or borderline low blood pressure. So the next time you see that 84-year-old lady, just remember, a little procedure can save a lot of pain. 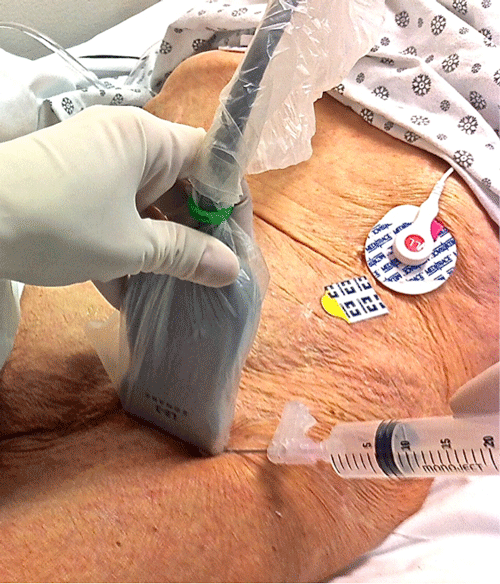 Correct positioning of probe and needle.