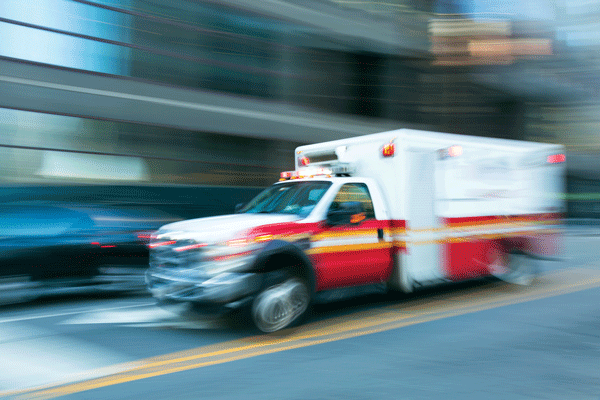 “This is Medic 19 bringing in a Sepsis Alert, ETA 5 min.” With that alert, you mobilize your team and prepare for the patient. When they arrive, intravenous (IV) fluids and IV antibiotics have already been initiated. A lactate has been performed and is 4.2.

There has been a push in the field of prehospital research to aid in sepsis diagnosis and intervention.

Sepsis is one of the more common life-threatening ailments to present to the emergency department (ED), with an estimated incidence of 3 per 1000 patients, and a mortality reaching 20%.1-3 While well-defined protocols currently exist for time critical diagnoses such as prehospital ST-elevation myocardial infarction, stroke, and trauma, analogous recommendations for sepsis have remained elusive, due in large part to the insidious and variable presentation of sepsis.

The past decade has been wrought with considerable controversy regarding the efficacy of initial resuscitative measures on outcomes in sepsis. In 2001, a seminal study describing the concept of early goal-directed therapy (EGDT) had far-reaching impact when it reinforced the importance of IV fluids and early antibiotics in sepsis resuscitation.4 Since then, a number of well-designed RCTs (PROCESS, PROMISE, ARISE) have challenged this longstanding paradigm and have created substantial uncertainty by demonstrating similar outcomes between EGDT and usual care.5-7 Despite these findings, the 2016 installment of the Surviving Sepsis Campaign has continued to strongly recommend at least 30mL/kg
of IV crystalloid within the first 3 hours, as well as the administration of IV antibiotics within one hour.8 This is intended to reinforce taking early action.

Beyond these well-studied outcomes of early sepsis recognition, there are a number of other theoretical benefits that exist when applied to the prehospital setting. These include identifying high-risk patients who are refusing transport, identifying appropriate transport destinations for these patients, generating early treatment momentum that enables faster triage to higher level of care within the ED, and jumpstarting Sepsis CMS Core Measures (SEP-1).9

Identifying sepsis in the prehospital setting remains difficult. In 2012, a retrospective 10-year cohort study of all adult patients transported by EMS in Seattle demonstrated that only 3.3% of patients were ultimately diagnosed with severe sepsis upon admission.3

Interestingly, of the total aggregate admissions for severe sepsis, 40% arrived by EMS, suggesting that severe sepsis may be less encountered for prehospital providers, but that when an individual with severe sepsis does arrive in the hospital, they are nearly as likely as not to have arrived by ambulance. Notably, only 19% of severe sepsis patients were thought to have a life-threatening condition by EMS, despite the fact that more than 50% met SIRS criteria initially. Furthermore, a significant proportion of patients with severe sepsis were transported by BLS ambulances, and many had patient contact for greater than an hour before arriving in the hospital.

Several structured screening tools have been developed for the identification of sepsis in the prehospital setting. These include the PRESEP, PRESS, BAS 90-30-90, and Robson Screening Tool, which all utilize some variant of the SIRS criteria.10-19 In the absence of a robust validation, however, definitive conclusions about the efficacy of any of these scoring systems must be deferred. With the recent endorsement of qSOFA in Sepsis-3, some scattered EMS systems have been investigating the utility of this tool in the prehospital setting. The current body of evidence, however, appears to be extremely weak.20

In addition to the aforementioned scoring systems, which focus heavily on vital signs, there has been an increasing amount of research into the validity of proxies for metabolic activity, such as end-tidal carbon dioxide (ETCO2) and point-of-care lactate, for sepsis identification.

The use of ETCO2 monitoring is already widely implemented by EMS systems to confirm endotracheal tube placement after intubation. Just as capnography can help monitor ventilation in cardiac arrest, it may serve as a surrogate marker for acidosis in sepsis as well.21,22

In 2013, a prospective observational study of adult patients with suspected sepsis sought to assess the association of ETCO2 with mortality and found that both very low and very high ETCO2 were associated with increased mortality. Earlier this year, the same investigators published the 12-month results of a prehospital screening tool for sepsis and severe sepsis (utilizing end-tidal carbon dioxide), which was implemented into their own EMS system in Orange County, FL (Figure 1).23-25

While all “sepsis alert” patients were included in the study, they were separated into two subgroups based upon whether there was strict adherence or incomplete adherence to the protocol (ie. not meeting full criteria for “sepsis alert”). In the protocol-compliant group, there was a significantly higher percentage of patients accurately diagnosed with sepsis (78% versus 43%). While these results are promising, they only comprise the cohort of patients who presented via a “sepsis alert.” For this reason, it cannot be concluded how many patients with sepsis were missed, either due to protocol noncompliance or due to passing the screening test.

While there appears to be a significant inverse relationship between ETCO2 and lactate, the strength of correlation appears to be moderate, which raises the question of whether it would also be worth also utilizing serum lactate in the prehospital setting.26-28

Presently, several devices have been investigated for this use, including the epoc ® blood analyzer and the iSTAT ®, as well as other POC devices initially designed for use with athletes. To date, it has been difficult to implement the commercially-available, single-purpose lactate meters in the prehospital setting, as the devices that are most affordable to prehospital agencies are often not approved for medical use (but rather for athletes engaging in anaerobic exercises), or require a moderately-complex laboratory license. Studies to date have shown mixed results with respect to device bias, and therefore lactate is not consistently used in the prehospital setting.29,30

Greenville County EMS in South Carolina has been using a “sepsis alert” protocol since November 2014.31,32 Their system responds to over 85,000 calls for service each year, with an average transport time of 16 minutes. In their protocol, prehospital providers are responsible for drawing blood cultures and samples for lactate measurement in patients in whom sepsis is suspected by SIRS criteria. Thereafter, they are permitted to administer a fluid bolus (30cc/kg to a max of 2L) and an intravenous antibiotic (1g ceftriaxone for suspected pneumonia, and 4.5g piperacillin/tazobactam for all other sources).

Between February 2015 and February 2016, 120 trained paramedics called 1,185 “Sepsis Alerts” from a pool of 56,643 patients (2%). Emergency department standard of care for sepsis was continued in 94.1% of Sepsis Alert patients. The authors reported that prehospital providers correctly identified patients in 73.5% of cases (using ICD-9 admitting diagnosis as a reference standard). A total of 946 blood cultures were collected with a contamination rate of 4.96% (comparable to established thresholds of hospital obtained blood cultures by non-phlebotomists).33 Lactate level was greater than 2.2 in 46.9% of patients. 72% of these patients received prehospital antibiotics with no adverse effects (of note, antibiotics were deferred when IV access or blood cultures were unobtainable, or when the patient was allergic to penicillin).

Finally, core measure achievement was observationally analyzed at one of their primary receiving facilities. It was found that EMS-transported patients reached CMS core measure goals 90% of the time, as compared to 60% in the ED alone. The authors also reported that patient mortality due to sepsis is historically low in the hospital system, with an estimated cost savings (related to length of stay) approaching $600,000.

While outcome data is still forthcoming, the protocol has been so successful that it has been adopted by the State of South Carolina”™s EMS protocols, allowing any EMS agency in the state to employ it.

In summary, prehospital identification of sepsis remains an imperfect science, albeit a constantly improving one. New screening tools implementing SIRS criteria with end-tidal carbon dioxide may show promise for improving the early identification of this potentially-lethal syndrome. While there is strong support for early antibiotics in patients with sepsis, the literature continues to harbor a paucity of powerful studies demonstrating improved outcomes with prehospital administration of antibiotics. As there are a number of potential logistical hurdles that accompany prehospital administration of antibiotics, forthcoming studies, including the Prehospital Antibiotics Against Sepsis Trial (PHANTASi; currently recruiting participants) and outcome studies from Greenville County EMS, will be important in shaping the impetus for improving sepsis care in the prehospital setting.34