Promoting and Expanding Ultrasound's Use in Central Venous Catheter Placement

Historically there have been various ways to place central lines. Ultrasound-guided central line placement has emerged as essentially the standard of care for most line placements, as it can visualize the needle entering the vein in real time. Various studies have proven the superiority of ultrasound-guided lines compared to using landmarks alone for placement.1,2 Another study showed arterial punctures were significantly reduced from 16% to 5% with ultrasound use in adults, and from 30% to 6% with ultrasound use in infants.2 Alternatively, one retrospective study found that consistent use of manometry to verify central line venous placement effectively eliminated arterial injury from unintentional arterial cannulation over a 15-year period.3 Another technique involves confirming venous placement with a blood gas taken from the initial blood return after venous puncture. Landmarks and signs such as non-pulsatile dark blood return versus pulsatile bright red blood can be used, but may be less reliable depending on the patient scenario, and so are best used in conjunction with a visual method. 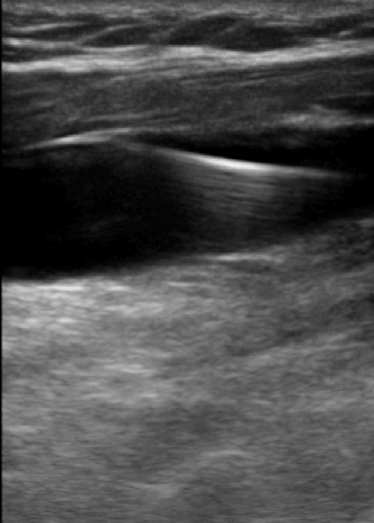 Procedural techniques may differ from institution to institution and between departments within institutions. While the evidence suggests that ultrasound use provides a superior and safer method for central venous catheterization, and it has become standard practice around the country, there are still some institutions and ICUs that require a pause in the procedure for confirmation with blood gas. It is less than ideal to stand sweating under a gown, trying to hold a needle or wire steady in a combative septic patient while awaiting the results of a blood gas analysis. Especially when you've already confirmed placement of the line with ultrasound.

Confirming guidewire placement with ultrasound is easily done during the procedure. While not always done after the initial venous puncture, guidewire ultrasound should be standard practice. You simply visualize the needle entering the vessel, then thread the guidewire, following it in transverse and longitudinal planes. Applying pressure with visualization verifies compressibility of the vein, and rules out placement in a pulsatile artery. The same technique can be repeated to confirm placement of the catheter within the vein. If we are waiting for additional tests to confirm placement, the chances are we are tipping the patient's procedural benefit to harm ratio in the wrong direction. We are risking damage to other structures, and may be postponing critical patient resuscitation. Patients in need of central lines often are unstable and need immediate central access placed. No matter how seasoned you are, line placement takes some time; adding on additional unwarranted minutes to the procedure can be dangerous to the patient.

A meta-analysis looking at central line placement in children and adults with real-time ultrasound imaging during needle placement reduced the time to venous cannulation, and even reduced risks and complications.2 Like all interventions, however, ultrasound use is somewhat dependent on operator skill level. Stone, et al. tested the use of ultrasound for confirmation of guidewire placement. Five clinicians who had all performed at least 25 ultrasound-guided central lines were shown an instructional video. Then 20 patients were enrolled, and these clinicians were asked to place central lines and confirm venous wire placement with ultrasound — both before dilation — and before catheter insertion. CVP was used as the control to confirm proper placement. The results indicated that ultrasound predicted venous internal jugular central line placement with 100% sensitivity and 100% specificity.4

With direct visualization of the needle or guidewire entering the vessel we have become more successful and have had decreased procedural complications as opposed to using just landmarks and entering blindly. Gillman, et al. collected a database of cases from September 2008 to January 2010 where ultrasound was used for internal jugular or femoral vein central line placement; the study looked at the prevalence of accidental arterial dilation during this procedure. During that time period they found that 53 central lines were inserted (21 central venous introducers, 9 dialysis catheters, and 23 multi-lumen venous catheters). There were no incidents of accidental arterial dilation or puncture.5 Another study involving sonographic guidewire visualization by Moak, et al. on a simulated vein showed that even novices (emergency medicine residents and medical students) were able to visualize a guidewire properly placed within a simulated vein with a high degree of accuracy. The overall sensitivity was 97.5%, and specificity was 95.0%.6

Ultrasound-guided central line placement has not only been studied for use on internal jugular and femoral vein cannulation, but it has also been investi- gated for subclavian vein catheter placement. Subclavian central line placement can be guided by ultrasound from either an infraclavicular or supraclavicular approach, and can be more successful than one might assume. There are several free teaching videos available online, and easily accessed via a simple browser search. Fragou, et al. performed a study comparing subclavian central line placement in 200 patients using ultrasound guidance versus 201 patients using the traditional landmark technique.

While nearly all institutions now use ultrasound for confirmation of venous puncture for jugular and femoral lines, there is still room to expand ultrasound use in this procedure. Confirmation of guidewire and/or cannula placement within the vein appears to improve procedural outcomes. Ultrasound is also being increasingly used for subclavian access. For those who work at institutions that still require a procedural pause for other methods of confirmation, we should advocate for proper US use and discuss the data. Ultrasound-guided placement and confirmation of central lines is, however — like all ultrasound procedures — still an operator-dependent skill with variable results and success based on level of expertise. Nevertheless, research has shown that with the right teaching and practice, even novice residents and medical students can quickly excel in ultrasound-guided lines and confirmation, even in scenarios where it was not previously used.