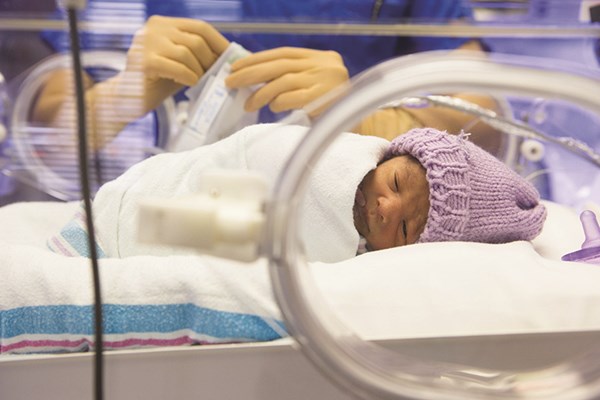 Introduction
The delivery of a newborn in the emergency department can be a very stressful experience, and even more so if the baby is premature or the result of a perimortem C-section. Recent data shows that the number of perimortmen C-sections has increased as emergency physicians and obstetricians have become better trained in the procedure.1 Per the CDC, there has also been a steady increase in the number of out-of-hospital births in the U.S. from 0.87% in 2004 to 1.36% in 2012, accounting for up to a staggering 6% of births in some states, increasing the likelihood that a neonate in distress may show up in an ED near you.2

Physiology
Taking care of the neonate requires some baseline knowledge of the rapid changes in physiology associated with birth. Up to 10% of all newborns will require some assistance to begin regular breathing, and just under 1% of newborns will require extensive resuscitative efforts. There are three major changes that occur in the neonate's lungs to allow for oxygenation: alveolar fluid absorption; increase in systemic blood pressure after clamping the umbilical cord from the placental circuit; and decreased pulmonary vascular resistance.3 The vast majority of all neonatal transition problems result from a disruption in one of those three processes. If there is inadequate ventilation (either weak breaths or meconium blocking the airways) the baby will not be able to force the fluid out of the alveoli. If there is systemic hypotension, possibly due to blood loss or if neonatal hypoxia or ischemia results in bradycardia and poor cardiac contractility, the neonate will fail to have the anticipated increase in blood pressure. Finally, if the pulmonary arterioles fail to dilate or if the infant has persistent pulmonary hypertension of the newborn, the pulmonary blood flow will be restricted, limiting the systemic supply of oxygenated blood.

Initial assessment
It is important to know who to call for help when faced with a neonate in the ED for hands and appropriate equipment. Call the NICU and send someone to grab the department's “born on arrival” kit. Remember that more than 90% of all children transition to the outside without the need for resuscitation and only routine care. An ED physician may only need a warm towel and a bulb syringe to save the day! The initial steps of resuscitation involve asking three questions: 1) Is the baby a term gestation? 2) Is the baby breathing or crying? and 3) Does the baby have good tone? If the answer to all of these is “yes,” then provide routine care and let the newborn stay with mom.

Initial resuscitation
If “no” is the answer to any of the three preliminary questions, the infant requires resuscitation. Remember, most neonatal cardiovascular compromise is respiratory mediated. The next steps of the resuscitation will take place in 30-second increments. The clock starts as soon as the neonate is born or reaches your care. Hit the timer button on the radiant warmer or ask a colleague to start keeping time. The initial steps involve providing warmth under a radiant warmer; removing any wet or fluid-stained linens; opening the airway by placing the infant in “sniffing” position with a slightly extended neck, if necessary suctioning the mouth then nose; and stimulating the baby. By 30 seconds, feel for the pulse at the base of the umbilical cord. The two numbers to remember in neonatal resuscitation are 100 and 60. If the infant has a heart rate of less than 100, is gasping, or apneic at 30 seconds of life, it is time to start positive-pressure ventilation (PPV).

Optimize ventilation
Positive-pressure ventilation should be delivered to infants with a heart rate less than 100, who are in respiratory distress, or who are apneic at 30 seconds of life. Assure a good seal around the mask and monitor for adequate chest rise to adjust the breath volume. Breaths should be at a rate of 40 to 60 breaths per minute. It is important to avoid hyperoxia. Oxygen saturation should guide resuscitation, so a pulse-oximetry probe should be placed on the infant's right (pre-ductal) upper extremity. Start the resuscitation with 21% oxygen on the blender. Permissive hypoxemia is allowed in the first 10 minutes of life (Table 1). Neonates require similar tidal volumes as adults--only 4-6 mL/kg.3 If the infant has a heart rate over 100 and is breathing spontaneously but has persistent cyanosis or labored breathing, consider CPAP. If the baby improves, the heart rate rises above 100, and the infant has adequate spontaneous respirations, transition to post-resuscitative care. However, if after taking corrective ventilation steps and achieving appropriate chest rise and fall, the heart rate has fallen below 60, proceed to the next step of resuscitation and begin chest compressions.

Support circulation
If after 30 seconds of effective PPV an infant remains profoundly bradycardic with a heart rate less than 60, begin compressions. The hands encircling the chest technique, with the thumbs placed on the sternum, is more efficacious than the two-finger technique. Compressions should be to a depth of approximately one-third the AP diameter of the chest with a ratio of three compressions to each breath at a rate of 120 events per minute (90 compressions and 30 breaths). It is helpful to say aloud “one-and-two-and-three-and-breathe” to coordinate your efforts. If the newborn requires circulatory support and continues to have a heart rate below 60 after 45-60 seconds of coordinated CPR, it is best to consider a definitive airway at this time.

Airway management
Intubation is a skill integral to emergency medicine, but there are some aspects of intubating a neonate that differ from the more commonly encountered adult intubations. Note that full-term neonates have sizable occiputs and a small shoulder roll may be required to attain proper airway alignment given the profoundly anterior larynx. Uncuffed ET tubes, Miller blades, and size variations based on birth weight and gestational age are standard (Table 2). Use of a stylet is optional. Neonates should not be paralyzed; remember that one may see closed or moving vocal cords. Be patient and wait for the neonate to breathe and open the cords before attempting to pass the tube. These babies have no reserve and will become hypoxic very quickly; intubation attempts should be no longer than 30 seconds in duration. Confirm placement as for an adult intubation.

Pharmacotherapy
If the baby has continued bradycardia <60 with adequate compressions and ventilation, the next step in resuscitation is pharmacotherapy. The only medication to be used during a neonatal resuscitation is epinephrine. The standard dosing of 1:10,000 epinephrine is 0.1-0.3 mL/kg, which amounts to 0.01-0.03 mg/kg. This may be given every 3-5 minutes as in PALS and ACLS. Epinephrine is preferentially given IV; however, access can be difficult to obtain. Venous access may be quickly achieved by placing an emergent umbilical venous line. Remember that the umbilical cord should have two small arteries and one floppy vein. Attempt to sterilize the umbilical stump and place an umbilical tie around the base of the cord to avoid exsanguination. Use a 3.5 Fr catheter for neonates less than one kilogram and a 5 Fr for all other infants. In an emergent case, insert the catheter until you have blood return.

If the baby remains bradycardic, pale, or continues to have poor capillary refill after epinephrine, consider acute blood loss. Initial volume expansion should be 10 mL/kg of crystalloid or non-crossmatched O blood. Avoid rapid pushes, as sudden fluid shifts have been associated with increased risk of intracranial hemorrhage in premature infants.4

Post-resuscitation care
Ideally, all neonates requiring resuscitation will respond well, begin breathing spontaneously with an improved heart rate, and can be transitioned to post-resuscitative care until pediatricians assume care. Unfortunately, not all infants respond well. Current literature supports the discontinuation of resuscitative efforts after 10 minutes of asystole, reporting poor likelihood of survival and severe disability in the rare survivor.3

It is important to know who to call for help when faced with a neonate in the ED for hands and appropriate equipment.

Extreme prematurity
Preterm labor and precipitous delivery of an extremely premature infant may present first to the emergency department. Premature infants are vulnerable to rapid heat and moisture losses. Resuscitation of these babies must focus on avoiding hypothermia. That's right! Premature infants <29 weeks should be wrapped in a gallon-sized, food-grade polyethylene plastic bag up to their necks to avoid moisture and heat loss.5 The most experienced provider in the room should be ready to quickly intubate these neonates. Handle these infants with care, as they are at increased risk for intraventricular hemorrhage and neurologic injury with rapid shifts in oxygenation, hydration, temperature, and pressures.

Hypoxic ischemic encephalopathy
Infants who experience significant hypoxic or anoxic injury are at risk for neurologic disability or death. An acute perinatal event, such as a precipitous delivery or placental abruption, contributes to hypoxic ischemic encephalopathy. Full-term infants with significant depression and acidosis may be eligible for therapeutic hypothermia. Hypothermia has been found to be neuroprotective and associated with a decreased risk of death and neurologic injury.6 Full-body hypothermia must be performed in a higher level NICU with the capability to cool and perform continuous EEG monitoring, so NICU consultation for possible air transport may be necessary. The protocol must be initiated within six hours of birth (Table 3).

Conclusion
The presence of a neonate or precipitous delivery is likely to induce at least mild tachycardia in the most experienced of ED providers, but remember that 90% of infants do well with routine care and apart from some key exceptions, resuscitation is similar to adults: