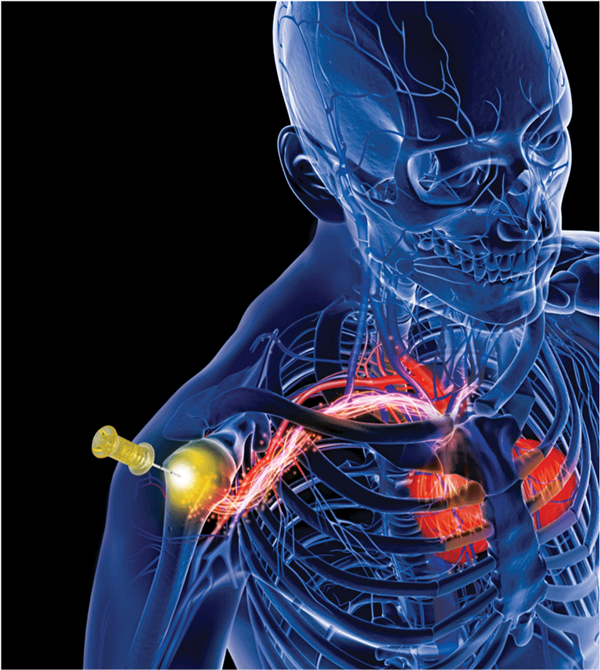 Resuscitation and the Humeral Intraosseous Line

A lethargic 56-year-old female with a history of end stage renal disease and intravenous drug use presents with hypoglycemia and severe hypotension. Despite multiple attempts from nursing staff and physicians, even using ultrasound, adequate access is unable to be obtained. Picking up your intraosseous (IO) device, you inspect the bilateral tibial plateaus, where you note a large vertical scar over each knee. Realizing that joint replacement is a contraindication to intraosseous line placement. Moving to the proximal right humerus, you successfully obtain IO access, and are able to administer D50 and normal saline. The patient's mental status begins to improve.

Although the technique for intraosseous vascular access was first developed nearly a century ago, this approach has enjoyed only variable popularity over the years. During World War II, sternal IO placement became popular due to the ease of insertion and ability to infuse large quantities of fluid or blood following loss of limb. During the first half of the twentieth century, peripheral IVs were largely made of stainless steel, and were quite unwieldy and prone to infection due to inadequate sterilization before re-use. Disposable plastic intravenous catheters were introduced in the mid-1950s, leading to a dramatic decline in the use of IO catheters in the United States.1 However, some disadvantaged countries continued to use stainless steel IO catheters long after this time, since they were reusable and cheaper than disposable plastic catheters.

In the 1980s, IO access regained popularity in the pediatric world. It was eventually incorporated into the Pediatric Advanced Life Support guidelines and then later into the American Heart Association's Advanced Cardiac Life Support difficult vascular access algorithm. Multiple studies have shown that IO placement is a quick, safe, and effective way to establish indirect vascular access.2,3,4,5 In fact, IO placement is currently recommended over central venous or endotracheal drug administration in cardiac arrest when intravenous access cannot be obtained rapidly.6

Recent literature on the proximal humerus IO insertion site suggests that it may be a better resuscitative line than the proximal tibia IO site, due to closer proximity to the central circulation and higher flow rates. Despite much higher successful placement rates than any other form of vascular access, and decades of modern experience in the pediatric population, IO catheters remain underutilized in the adult ED.

Intraosseous catheter placement is indicated in emergent situations in which vascular access is needed, but peripheral IV access is difficult or impossible to obtain. Examples include rapid sequence intubation, cardiac arrest, hypovolemic shock, septic shock, or other forms of unstable hypotension requiring emergent resuscitation. In all of these cases, prolonged vascular access attempts can delay potentially lifesaving interventions.

*These are contraindications to insertion at the selected site, but do not prevent insertion of the catheter at a different anatomic site.

To avoid injury to the biceps tendon during humeral IO insertion, position the arm in one of three ways:

Avoid excessive abduction of the arm over the head to prevent accidental IO dislodgement. Once you have appropriately placed the patient's arm, palpate the greater tubercle of the proximal humerus. Then locate the surgical neck of the humerus below the tubercle. The ideal insertion site is 1 cm above the surgical neck. Clean the insertion site with chlorhexidine or an alcohol swab, and prime the IO connector tubing with sterile 0.9% normal saline.

Aim the IO at a 45 ° angle towards the contralateral hip (Figure 1). Insert the needle through the skin and soft tissues until you hit the bone. Check to make sure that you have at least 5 mm of catheter still outside of the skin, to ensure that your catheter will be long enough to be used (Figure 2). Pull the trigger and drill the IO into place. In patients greater than 40 kg in weight, the Arrow EZ-IO driver should be loaded with a yellow 45 mm needle, which is specifically designed for the humeral insertion site.6 One recent MRI study confirmed that the blue 25 mm needle length is inadequate for humeral IO access in as many as 50% of adult patients.7 The standard 25 mm needle is used for the proximal tibial IO and the pediatric humeral IO (Figure 2).

Even in alert patients, the actual IO insertion is usually well tolerated. However, high-pressure infusion of fluids and medications can be quite painful, due to rapid change in the intraosseous pressure. Slow infusion of 40 mg (2 mL) of preservative-free 2% lidocaine over two minutes can help reduce or even eliminate this discomfort. Be sure to use a lidocaine formulation designed for intravenous use, rather than lidocaine intended for intradermal injection. The pediatric dose of IO lidocaine is 0.5 mg/kg, up to a maximum of 40 mg. Let the lidocaine linger in the IO space for one minute. Then, flush the line quickly with 0.9% normal saline. If discomfort persists, consider giving half of the original dose of lidocaine again (up to 20 mg) slowly over one minute.

One of the advantages of IO placement is the ease by which it can be successfully placed. Instead of struggling with peripheral IVs, crash central lines, and ultrasound-guided lines, an IO can usually be placed within 30 seconds.8 At both humeral and tibial insertion sites, landmarks can be palpated and successful insertion can occur rapidly, even with patients who are morbidly obese or have severe peripheral edema. In one recent military study, the humeral IO was shown to have a first past success rate approaching 96% and a second pass success rate of 100%.2

The flow rate through an IO line depends upon multiple factors, including the length and width of the IO needle, infusion pressure, intrinsic resistance within the bone marrow, and the size of the IO space.6 Higher flow rates will be obtained when a pressure bag or infusion pump is used for high volume fluid resuscitation. In one study, flow rates nearly doubled (from approximately 80 ml/min to 150 ml/min) when the pressure bag was used, with nearly equal infusion times for both tibial and humeral IO infusions.4 This flow rate is comparable to other resuscitative lines, including large bore peripheral IVs. More recent studies in both swine models and humans, however, have shown higher flow rates in the humeral IO compared to the proximal tibial insertion site.9,10,11,12 A 2010 study showed that the humeral mean flow rate was 5,093 ml/hr  ± 2,632 ml/hr (range 828-9,000 ml/hr) and the tibial mean flow rate was 1,048 ml/hr  ± 831 ml/hr (range 336-3,300 ml/hr).9,12 A 2013 swine model showed nearly twice the flow rate at the humeral IO site (213 ml/min) compared to the tibial site (103 ml/min).10 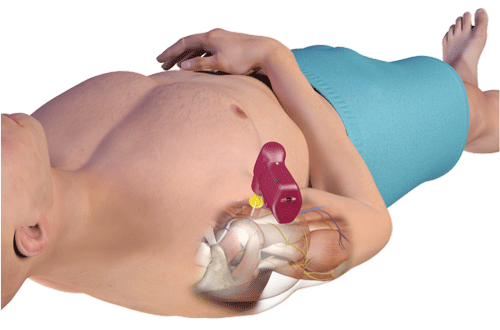 Figure 1. Note the correct positioning of the patient's arm, angle of the IO drill, and anatomical insertion site. 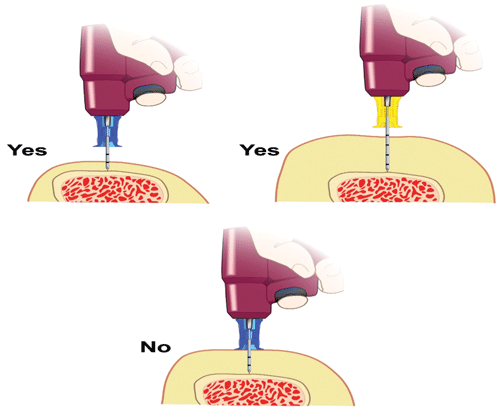 Figure 2. To properly insert the IO make sure to choose the correct size needle. There should be at least one black line above the skin (equivalent of 5 mm).

Many reasons exist as to why IO insertion is underutilized in the adult ED, including lack of familiarity with the procedure, concern for the patient's perception of pain, and uncertainty regarding the potential complications associated with IO line placement. The most common complication of IO access is extravasation of fluids. A properly placed IO line should be able to be flushed smoothly with 10ml of normal saline without evidence of extravasation. Contrary to popular belief, it is not necessary to aspirate bone marrow to confirm placement. However, if evidence of extravasation is seen, use of the catheter should be discontinued immediately to reduce the risk of rare complications such as compartment syndrome.

A recent retrospective study of critically ill trauma patients showed a complication rate of 1.38% with IO placement. Most of these complications were device insertion failures. In the same study, a wide variety of blood products and 32 different medications were administered with very few complications.8

Other theoretical complications related to IO access include unintended bony injuries, osteomyelitis, vascular injury, and fat emboli. All of these complications are quite rare and can be decreased with proper anatomical knowledge, appropriate technique, and sterile practices. It is recommend that the IO line be removed within 24 hours after placement to minimize infection risk. The line can be labeled with the date of recommended removal to remind staff who may be less familiar with the IO when it should be removed. However, there are documented cases of IOs that have been in place for up to a month without complication.6

Peripheral IV and central venous access also have complications, including infections, air embolisms, and pneumothorax, all of which may be more likely to occur when crash lines are performed.

For the purposes of medication and fluid infusion, the IO line should be considered equivalent to a large-gauge peripheral IV catheter. All fluids and medications that can be administered safely via peripheral IV can be given IO. As with any other peripheral vascular access device, it is recommended to refrain from using it to infuse hypertonic saline or vasopressors.

Humeral IO infusion is an excellent option for critically ill patients in whom vascular access is difficult or impossible. With proper understanding of the indications and contraindications for this simple procedure, you can easily establish reliable vascular access within seconds. Humeral IO placement is just as easy to perform as tibial IO insertion and may be a better line for resuscitation, due to higher possible flow rates. With a pressure bag, flow rates through the proximal humerus are adequate for large volume resuscitation. As with most peripheral vascular access devices, complication rates are low with IO placement. Pain is a legitimate concern, but can be minimized with judicious lidocaine administration. Although the humeral IO line is an underutilized tool in the adult ED, it is a valuable technique that can save lives when used properly.