Case
An 83-year-old male is dropped off by his caregiver with a chief complaint of shortness of breath and “acting different” for one day. Before turning around and leaving, she also mentions that he has a rash around his groin. Physical exam reveals an ill-kept male in respiratory distress – he's awake, but unresponsive, and the rash in his groin is shown (Image 1). A presumptive diagnosis of Fournier's gangrene with septic shock is made. The patient is intubated and early goal-directed therapy is initiated. CT of the abdomen is obtained (Image 2), showing diffuse free air. Urology is emergently consulted and the patient is taken to the operating room. Sadly, the patient quickly decompensates on the operating table and passes away.

Fournier's Gangrene
Classified as a type 1 necrotizing fasciitis of the perineum, Fournier's gangrene is one of the most feared and commonly fatal findings in the perineum, with a mortality rate ranging between 3 to 38%. Although it can be seen in both genders, it occurs primarily in men between the ages of 20 and 50, and commonly infects the penis and/or the scrotum. Fournier's is typically a polymicrobial infection, including both aerobic and anaerobic bacteria. It is compounded by diabetes, immunocomprimised states, and poor nutrition, which are all major risk factors for development of the disease. The most common factors preceding the development of Fournier's gangrene are infection or trauma to the perianal area, including anal intercourse, scratches, pressure ulcers, and chemical- or thermal-induced injuries.1

Symptoms of Fournier's often start with vague abdominal pain or severe itching as the bacteria infect the anterior abdominal wall and then spread to the gluteal muscles, back, perineum, and eventually into the scrotum and penis. Patients will commonly present with nausea and vomiting, changes in mentation, and lethargy, which are usually accompanied by systemic findings, including fever, tachycardia, and hypotension. Sepsis is a common precipitant of Fournier's gangrene. In patients with SIRS and no identifiable source, the perineum should be examined closely for any evidence of infection. Physical exam often reveals somewhat extreme abdominal pain. Skin findings range from tense edema to blisters or bullae, crepitus due to subcutaneous gas, and frank necrosis.

Pathophysiology
As stated, infection is most frequently polymicrobial, consisting of both anaerobic and aerobic bacteria. The most common anaerobes are Bacteroides, Clostridium, or Peptostreptococcus, while Group A Streptococcus is usually the common aerobic culprit.2 Cultures from many cases have demonstrated bacteria from the distal colon, including Bacteroides fragilis and Escherichia coli, which may be the result of direct perianal trauma. The bacteria commonly infect the muscle fascia and subcutaneous tissues of the perineum, leading to destruction of the small branches of the pudendal arteries that supply the perineal and scrotal skin. The pudendal aterial tree is the primary blood supply to the perineum; once it is destroyed, the bacteria can spread quickly throughout the region. The resulting erythema, edema, inflammation, and infection in a devascularized space provide a prime environment for anaerobic bacterial growth. Muscle and skin have a more prominent blood supply, so the progression is slower through these deeper tissues; but once they are infected, systemic symptoms are more likely to be seen.3

Diagnosis
The symptoms and findings commonly considered and previously mentioned as typical for Fournier's gangrene are usually present at the advanced stages, but early infection may only present with localized redness. Resultantly, necrotizing infection should be on the differential for any rapidly spreading erythema. Another potential pitfall is that, due to the amount of perineal swelling and pain distribution, Fournier's may be mistaken for a strangulated hernia. Any presence of perineal gangrenous tissue, subcutaneous air, or crepitance should make the clinical diagnosis. Labs for septic shock, including a blood gas with lactate and blood cultures, should be sent immediately. Although the diagnosis is frequently obtained clinically, CT or MRI of the infected area can provide confirmation by showing the appearance of free air in the subcutaneous tissues. When needed, these imaging studies can help to guide management, but imaging should never delay the necessary treatment – surgical debridement.

Treatment
Although early goal-directed therapy should be started as soon as gangrene is suspected, the definitive treatment is surgery. Urology or corresponding acute care surgery should be involved in the case as early as possible because source control is essential. Deep debridement down to bleeding viable tissue is required to remove all infected tissue. This can require multiple trips to the OR for complete treatment. Patients with Fournier's gangrene may require cystostomy, colostomy, or orchiectomy, depending on the tissue involvement.4 Antibiotics should be started prior to surgery, but surgery should not be delayed while waiting for them to be prepared. Use of a carbapenum — such as meropenem or ertapenem, in addition to clindamycin — should cover the anaerobic bacteria, while coverage for aerobic bacteria should include vancomycin, daptomycin, or linezolid in order to account for potential MRSA co-infection.5

Conclusion
Although Fournier's gangrene is associated with high mortality, a high suspicion can lead to an early diagnosis and increased survival. Early surgical debridement and broad-spectrum antibiotics are the mainstay of treatment, and both are directed by the competent emergency physician who makes the diagnosis. 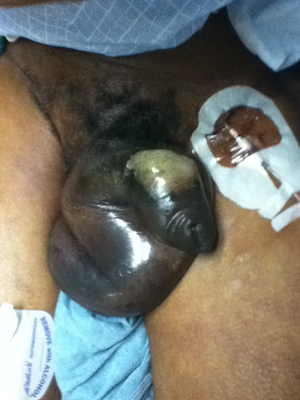 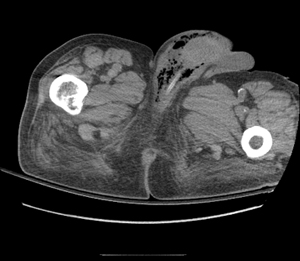 Image 2. CT imaging of the pelvis, revealing free air within the perineum and involving the genitals, consistent with necrotizing disease.