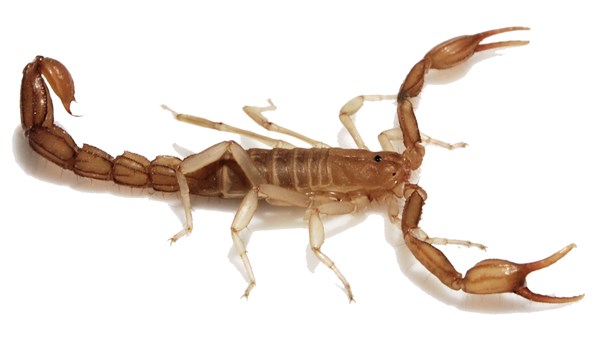 Background
There are over 1,500 species of scorpions worldwide, of which only about 50 are dangerous enough to harm a human. The Arizona bark scorpion (Centruroides sculpturatus) is the most clinically significant venomous species of scorpion indigenous to North America.1

The Arizona bark scorpion can be found throughout the southwestern United States, including Arizona, New Mexico, Texas, California, Utah, and Nevada.2 This scorpion's venom is composed of multiple heat-stable neurotoxins, an ACE inhibitor, and a component that inhibits platelet aggregation. The neurotoxins inhibit voltage-gated sodium channels of the peripheral nervous system, causing a prolonged membrane action potential and allowing repetitive axonal firing.3

Scorpion venom is potentially fatal, particularly to children and infants. In the United States, there were 18,261 reported cases of scorpion stings in 2013. Of these, 5,187 cases occurred in patients 19 years of age or younger.4 The pediatric population is the most vulnerable to the scorpion's neurotoxins, resulting in the vast majority of severe cases requiring hospital admission. Most adults who are stung by the bark scorpion experience only localized symptoms.

Evaluation
Signs and Symptoms
The first symptoms of a scorpion sting are pain and paresthesias near the area of the envenomation. Unfortunately, the sting itself does not usually produce a local inflammatory reaction, making diagnosis in young children and infants difficult. Symptom onset is typically within a few minutes after the sting and progresses to its maximal effect within five hours. Without antivenom, the average time to resolution of symptoms is approximately 30 hours. More severe reactions can result in cranial nerve findings, neuromuscular abnormalities, and/or autonomic dysfunction. Interestingly, the venom interacts with several autonomic adrenergic and cholinergic receptors and can result in a mixed cholinergic-anticholinergic presentation, known as “hypercholinergic syndrome” (Table 1).

The most common presenting symptoms in the pediatric population are restlessness, writhing, opsoclonus, tachycardia, and hypersalivation.6 Rare symptoms include hyperthermia, rhabdomyolysis, gastrointestinal disturbance, respiratory failure, non-cardiogenic pulmonary edema, transient pancreatitis, transaminitis, coagulopathy, persistent neurologic dysfunction, and multisystem organ failure.5 The severity of envenomation is graded on a scale from I to IV (Table 2).

Labs
Patients with grade III or IV envenomation should have additional labs drawn based on clinical findings to evaluate for problems such as electrolyte abnormalities, rhabdomyolysis, and end-organ dysfunction. For patients with underlying comorbidities, blood glucose monitoring and ECG should be considered as well.5

Management
Management of scorpion envenomation is based on clinical severity. Patients who present to the emergency department with grade I or II envenomation can be managed conservatively with local pain control. Given that a scorpion sting is considered a puncture wound, the patient should also have their tetanus updated if not current.

Grade III or IV envenomation may require administration of anxiolytic and analgesic medications. Neuromuscular hyperactivity should be managed with short-acting benzodiazepines such as midazolam.8 It is important to achieve adequate pain control with a short-acting opioid – fentanyl is often preferred because it releases less histamine than other opioids.6 In extreme cases, patients may progress to respiratory failure and require mechanical ventilation. Small doses of atropine have been used to counteract the venom's hypercholinergic effects, although there have been no studies conducted to evaluate its efficacy. Many patients are treated concomitantly with intravenous fluids. Given the hypercholinergic state that is produced by the scorpion venom, it is important not to misdiagnose these patients with anaphylaxis.  Administration of systemic epinephrine, or racemic epinephrine if stridulous, might cause further patient harm.5

Antivenom
The use of antivenom for the treatment of scorpion envenomation remains controversial. The first FDA-approved scorpion antivenom (Anascorp ®) was introduced in August 2011. Factors that limit its use are the high cost per vial and side effects that range from rash to hypersensitivity reactions. The venom is made from horse proteins, so it should be used with caution in those with sensitivity to equine formulations. If a hypersensitivity reaction or anaphylaxis occurs to the antivenom, it should be treated as it would be in any other similar situation.

Typically between three and five vials of antivenom are required per scorpion sting. It is important to consider that antivenom may have an additive sedating effect if given to patients who have recently received benzodiazepines.5 Despite these factors, advocates of the use of scorpion antivenom refer to multiple published studies that have demonstrated that its use significantly decreases symptom duration, with resolution in as little as three hours.2,9

Disposition
Pediatric patients who have been observed in the ED for at least five hours after a scorpion sting without progression of symptoms beyond grade I or II can be safely discharged home. Patients who have a grade III or IV envenomation will likely require treatment with antivenom and/or hospital admission for symptom management; they have a higher likelihood of requiring advanced supportive measures.

Conclusion
While thousands of individuals are stung by scorpions every year in North America, few are seriously affected. Most of those who develop severe symptoms, including somatic or cranial nerve dysfunction, are in the pediatric age group. Benzodiazepines and opioids are currently the standard of treatment, though intravenous fluids, atropine, and antivenom have also been used. Naturally, supportive care should be administered as needed. Treatment with antivenom should be considered for those with severe envenomation, though a few cautions exist. Importantly, since these patients can appear anaphylactoid, a thorough history and exam for findings of the hypercholinergic syndrome should be performed in order to guide treatment and avoid therapeutic misadventures. Since maximal time to onset is typically five hours, patients with only localized symptoms can be safely discharged home if there is no progression of the disease after observation for that period of time. 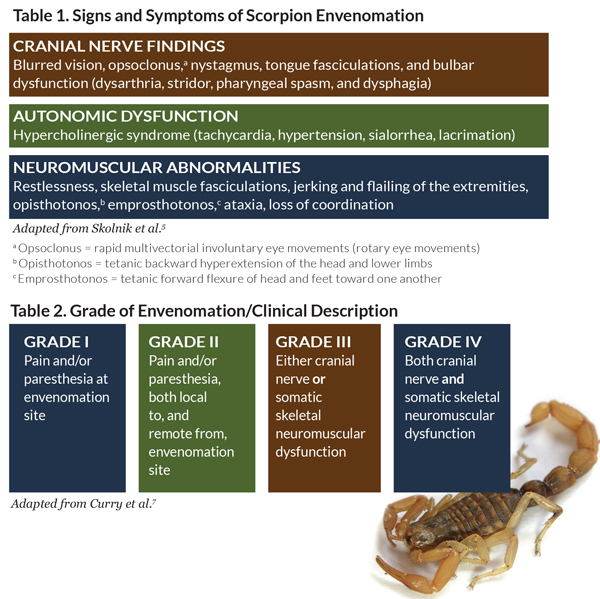