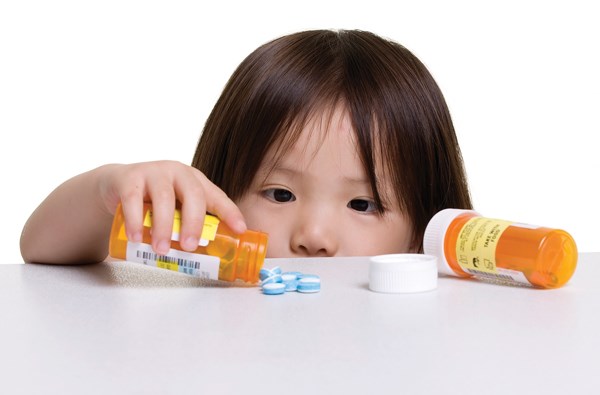 Small, but Deadly: Nine Pediatric Toxic Ingestions that Can be Fatal at Low Doses

In this issue of EM Resident we present Part One in a two-part series on toxic pediatric ingestions. Nine potentially fatal groups of ingestants will be discussed. In this issue, we will start with the first five. Look for Part Two in the December/January issue, when we will discuss four more potentially fatal ingestions.
You are about to evaluate a 22-month-old female whose chief complaint is listed as “drug ingestion.” You see her walking into her room, holding her mother's hand. Despite the anxiety in her mother's face, your patient doesn't seem to have a care in the world. As you start your evaluation, what toxic drug ingestions should you be most worried about

1. Opioids — methadone, prescription analgesics, fentanyl patches, diphenoxylate-atropine (Lomotil)1-3
Through its effect on the mu opioid receptor, virtually any opioid can lead to hypoxia secondary to respiratory depression within a couple hours of ingestion by an infant or toddler. While most opioids will show some signs of toxicity within 1-2 hours of ingestion, their half-lives can be as long as 9-10 hours in extended-release preparations. Lomotil, an anti-diarrheal agent, is an opioid-anticholinergic combination. Thus, be wary of both opioid and anticholinergic (agitation, fever, flushed dry skin, tachycardia) symptoms.How it's treated
Assess the brain and breathing. Initial management includes assessment of the child's mental status and respiratory drive. The specific type of opioid ingested, as well as the dose and quantity, will be helpful in further management.Give naloxone. The mainstays of treatment include closely monitoring the child for CNS and respiratory depression, and administering the opioid receptor antagonist naloxone if such signs present.

2. Central alpha-2 adrenergic receptor agonists – clonidine,  guanfacine, eye drops, nasal decongestants1,4
These agents will decrease sympathetic tone and respiratory drive, which can manifest as hypotension, bradycardia, miosis, loss of consciousness, and respiratory depression. The effects closely mimic those of opioid agents. Toxic effects can develop within 1-2 hours.How it's treated
Support the vitals. Hypotension often responds to intravenous (IV) fluids, but may require vasopressors such as dopamine or norepinephrine. Atropine can be given for significant bradycardia. Naloxone may be effective, although the mechanism is not clear and the response is often inconsistent.

3. Sulfonylureas – glipizide, glimepiride, glyburide1
These oral hypoglycemic agents stimulate insulin release from the pancreas. Small doses can leave a child at risk for hypoglycemia and all of its life-threatening sequelae, including somnolence, loss of consciousness, seizures, and death.
How it's treated
Prolonged monitoring. The duration of monitoring will usually be at least 24 hours, as there have been several reports of delayed hypoglycemic episodes well beyond the reported half-life of the drug.
Give charcoal. For children presenting within an hour of ingestion, activated charcoal should be administered if the child can safely ingest it.
Give sugar. Asymptomatic children should be encouraged to eat, but those who develop symptomatic hypoglycemia should receive boluses of IV dextrose, as well as infusions of dextrose mixed with normal saline.
Give octreotide. Octreotide inhibits the release of insulin and should be considered in those patients who continue to be hypoglycemic despite oral intake and IV dextrose.

4. Calcium channel blockers (CCBs) – verapamil, diltiazem, amlodipine, nifedipine1,5,6
CCBs work by blocking L-type calcium channels in vascular or cardiac tissue, depending on the agent. Hypotension is the most common sign of CCB toxicity. While bradycardia is the typical effect on the heart rate, the more peripherally-acting agents (the dihydropyridines – amlodipine and nifedipine) may actually cause a reflex tachycardia. CCBs also block calcium channels in the pancreas, which inhibits insulin release and leads to hyperglycemia. A less common but equally concerning effect of CCB toxicity is non-cardiogenic pulmonary edema.
How it's treated
Stop absorption. If presenting within an hour of ingestion, activated charcoal should be given. If an extended-release preparation was ingested, consider whole bowel irrigation in conjunction with activated charcoal.
Support vitals. IV fluids and atropine should be used to correct the blood pressure and heart rate, respectively. By competing with the CCB, calcium chloride or calcium gluconate can help mitigate these cardiovascular effects as well. For persistent hypotension, norepinephrine should be administered.
High dose insulin-euglycemia therapy (HIE). In refractory cases of CCB toxicity, consider initiating HIE. HIE increases inotropy, intracellular glucose transport, and vascular dilation, all of which improve microvascular perfusion. A common dosing regimen is a bolus of insulin at 1 unit/kg followed by an infusion of insulin at 0.5-1 unit/kg/hr. Serum glucose and potassium levels should be closely monitored.

5. Tricyclic (and tetracyclic) antidepressants (TCAs) – imipramine, amitryptiline, mirtazapine1,7
These medications act on multiple receptors, which accounts for the wide variation in their clinical presentation. TCAs block sodium channels in cardiac myocytes, which prolongs the QRS complex and can lead to ventricular dysrhythmias and hypotension.

Seizures can occur due to GABA inhibition and catecholamine reuptake inhibition. Some formulations have potent anticholinergic properties, causing hyperthermia, tachycardia, and altered mentation. Signs of toxicity should present within 6 hours of ingestion.

How it's treated
Supportive care. Provide IV fluids, and make sure they are protecting their airway. The patient should be closely monitored until they become asymptomatic. Conversely, asymptomatic patients can generally be discharged 6 hours post-ingestion. Charcoal can be considered if presenting within the first hour.

Serial ECGs. Widening of the QRS complex is often the first marker of severe toxicity, followed by ventricular dysrhythmias.

Sodium bicarbonate (NaHCO3). When there are signs of cardiotoxicity, administer IV NaHCO3. The sodium will compete with the TCA for the sodium channels on cardiac myocytes, while bicarbonate's effect on pH will favor the formation of the inactive, nonionized form of the TCA. These effects culminate in narrowing of the QRS complex and preventing dysrhythmias. Keep in mind that multiple doses of NaHCO3 may be needed, and some patients may even require a continuous infusion.

Antiarrhythmics? While it may be tempting to give antiarrhythmic agents in these cases, they are typically not effective, and some are absolutely contraindicated. There is one notable exception: in the setting of TCA-induced arrhythmia refractory to IV NaHCO3, lidocaine may be helpful, although the data supporting its use is limited. Other antiarrhythmics should not be used.

Conclusion
Your patient's mother confirms that the only medication in the house is her 50-mg tablets of amitriptyline. The child swallowed about four, and did so around one hour ago. You immediately place her on a cardiac monitor and order a 500 cc bolus of normal saline. You administer activated charcoal, but the child is only able to tolerate half of the dose. About 4 hours into her clinical course, you find her heart rate to be around 190, and an ECG shows a QRS complex of 140. You quickly administer sodium bicarbonate, while continuing to hydrate her with fluids. Her tachycardia resolves and her QRS narrows once again. She is admitted for further monitoring and discharged safely the next day.