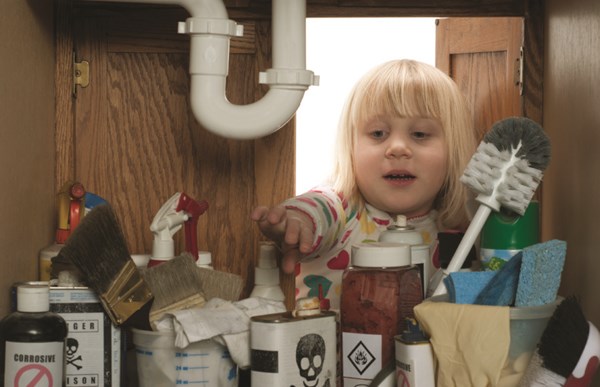 Remember that 22-month-old girl from the last issue? Well, armed with the information from the last article, you now  feel ready to treat any of her potential medication ingestions. But what happens when you get to the bedside and discover that what she swallowed wasn't from a pill bottle, but instead was from a jug in the garage? Now what are you worried the most about?

Household Products
Camphor1,2
Camphor is an organic compound that is often used in over-the-counter topical analgesics as well as for religious purposes (the Hindu religion uses it as the burning agent for a religious flame). While the mechanism is unclear, death is usually due to respiratory failure or status epilepticus. Symptom onset is typically within an hour of ingestion, with the most common initial symptoms being nausea and vomiting.

How it's treated
Help them breathe. Intubate if necessary for airway protection or in the event of profound respiratory depression.

Monitor their liver. Camphor is a potent hepatotoxin, particularly in children whose hepatic function is still not fully developed.

Watch for seizures. Initial treatment of seizures should be with benzodiazepines.

Methyl salicylates (oil of wintergreen)1,3. Oil of wintergreen is present in several over-the-counter topical analgesics, but it can also be purchased as an essential oil. One teaspoon of 98% oil of wintergreen has the salicylate content of 7 grams of aspirin. Toxicity typically presents with nausea, vomiting, tinnitus, hyperventilation, and altered mentation, with more severe overdoses causing pulmonary and cerebral edema.

How it's treated
Check the level. The salicylate level should be checked regularly until the child is clinically improving and the level drops to below 30 mg/dL, which is considered the threshold for toxicity. Because of its pharmacokinetics, large overdoses may take 10 hours or more to peak.

Alkalinize the urine. By alkalinizing the urine, NaHCO3 infusions will leave salicylates in their anionic form, which cannot be reabsorbed by the kidney. This will increase their rate of excretion.

Watch the potassium. Hypokalemia is common in salicylate toxicity and is a known side effect of NaHCO3 infusion. If left uncorrected, it will prevent effective urinary alkalinization.

Hemodialysis. There are certain clinical signs to look for that indicate the need for emergent hemodialysis. These include pulmonary edema, altered mental status, seizures, coma, renal failure, life-threatening acid-base or electrolyte status, lack of response to urinary alkalinization, or a salicylate level >100 mg/dL in an acute overdose.

Toxic alcohols — methanol, ethylene glycol1,4
Found in numerous household products from antifreeze to windshield-washer fluids, they often have a pleasant taste and attractive color. Both of their clinical presentations initially mimic ethanol intoxication. The metabolites are toxic alcohols, which are osmotically active agents. Thus, the laboratory abnormality to look for is an osmolar gap and anion gap metabolic acidosis. Methanol's terminal metabolite, formic acid, is responsible for retinal injury, which is classically described as “snow-storm” vision. While peak serum levels occur within 4 hours of ingestion, effects may be present for much longer. Ethylene glycol is metabolized into several organic acids, one of which is oxalic acid. It binds to calcium, forming calcium oxalate crystals that in turn cause acute tubular necrosis. Meanwhile, the aggregation of calcium into these crystals can cause hypocalcemia, which can lead to ECG changes and hypocalcemic tetany.

How it's treated
Think about them! There is often a significant delay in diagnosis due to their nonspecific symptoms. In the appropriate clinical setting, the presence of an osmolar gap should greatly increase the suspicion of toxic alcohol ingestion. Consider ordering serum levels of these toxins in addition to serum osmolarity studies whenever a lethargic or unresponsive child presents to the ED.

Give fomepizole or ethanol. Because the metabolites of these alcohols are the major toxins, preventing their formation is very beneficial. Alcohol dehydrogenase is the rate-limiting enzyme in their metabolism. Because ethanol is a more desirable substrate for this enzyme, and fomepizole acts as a competitive antagonist to alcohol dehydrogenase, these two agents can prevent the formation of those dangerous metabolites.

Hemodialysis. Hemodialysis should be performed when the acidosis persists, despite aggressive treatment, or when the patient develops coma, seizures, or renal failure.

Laundry detergent pods5
Laundry pods are becoming increasingly common pediatric ingestions. Their colorful packaging is attractive to children, while their highly concentrated contents are potent toxins. A wide variety of symptoms have been reported, but the most common effects include vomiting, oropharyngeal inflammation, lethargy, and respiratory distress. Although the exact mechanism of toxicity is still unclear and varies based on the manufacturer, it is believed that the surfactants included in the detergent are responsible for most of the caustic effect on soft tissue, while the ethoxylated alcohols contribute to the CNS effects.

How it's treated
Protect the airway. The combination of gastrointestinal irritation and CNS depression leaves the child highly susceptible to aspiration pneumonitis and respiratory failure. Meanwhile, the caustic effect of the solvents can lead to life-threatening upper-airway edema. Maintain a low threshold to intubate symptomatic patients.

Consider steroids. Although not studied extensively, various case reports have demonstrated improvement in symptoms after administration of a short course of intravenous steroids.

Conclusion
Little children are often the subjects of toxic ingestions. Their proclivity for being “little scientists” leads them to explore the world in sometimes harmful ways. Having a good handle on which pharmaceutical and household ingestions are the most toxic and potentially lethal will help guide practice and management and may save a life.

In case you missed it, part one of this two-part series was published in the October/November issue of EM Resident and can be found at /pediatric-toxic-ingestions/.