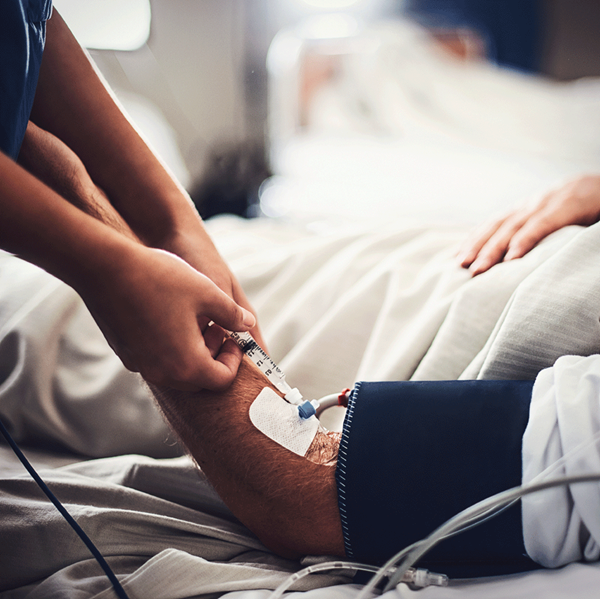 A 37-year-old female arrives to the emergency department after a high-speed motor vehicle collision. A traction splint is applied to an open mid-shaft femur fracture. Vital signs: BP 105/76, HR 137, RR 28, O2 100%. She is screaming in pain. IVFs are bolused; morphine 4 mg, and ketamine 10 mg IV are administered. Within 5 minutes, her pain has improved significantly.

A 22-year-old male with Crohn's disease presents complaining of severe abdominal pain. He has had multiple past ED visits with similar complaints, and often receives multiple rounds of hydromorphone. After he is examined, hydromorphone 1 mg IV is given. After 30 minutes, the patient requests additional pain medicine. This time, ketamine 15 mg IV is given. Ten minutes later, the patient reports that his pain has completely resolved.

Opioids are some of the most commonly used medications for acute pain in the emergency department. Despite their widespread use, they can present several challenges. Acutely, hemodynamic or respiratory compromise limits opioid administration and complicates efforts to achieve effective analgesia in painful conditions. Chronic opioid users experience opioid tolerance and opioid-induced hyperanalgesia, which render opioids less efficacious in treating episodes of acute pain.

Ketamine is a drug with a fairly novel mechanism of action that has been used in a wide variety of settings as an anesthetic. When used at lower doses, it can act as a potent analgesic. While ketamine's role as an analgesic in the ED is still somewhat unclear, it has several potential advantages. Unlike opioids, sub-dissociative doses of ketamine typically do not cause respiratory depression, hemodynamic compromise, or sedation.1 In patients who have tenuous hemodynamics, ketamine may provide a safer alternative to other analgesics.

Ketamine has a promising role in an emergency physician's analgesic armamentarium.

Ketamine's multi-modal mechanism of action offers another potential benefit. Traditionally, ketamine has been described as an N-methyl-D-aspartate (NMDA) receptor antagonist; however, recent research has revealed that it likely works on a number of pathways, including stimulating opioid receptors and blocking serotonin uptake. These varied mechanisms of action have the potential of providing analgesia by altering pain pathways that are not affected by other analgesics.2

To treat acute pain, ketamine is given at a sub-dissociative dose of 0.1-0.3 mg/kg IV.3 This dose is much lower than the typical procedural sedation dose of 1 mg/kg. It has been proposed to start with a bolus of 0.1-0.3 mg/kg given over 10 minutes. The duration of action is relatively short (5-15 minutes), so repeat bolus doses can be given if needed. Alternatively, an infusion can be provided at 0.1-0.3 mg/kg/hr.4 Towards the higher end of sub-dissociative dosing, patients may report some altered sensorium, but should not experience any significant amount of sedation. When used in this sub-dissociative range, ketamine is not considered a sedative, and patients do not need the level of monitoring required by procedural sedation.3,5,6

Ketamine's role as an analgesic has been studied and utilized in the peri-operative setting, burn units, pain clinics, and palliative care settings.5,6 Until recently, little data has described its role in treating acute pain in the ED.3 While ketamine may have a role as a sole analgesic, the majority of the literature to date has evaluated its role as an adjunct to traditional analgesics.

Emerging data suggests that ketamine can help provide analgesia for patients who have exacerbations of chronic pain. Uprety, et al. evaluated patients who presented with acute sickle cell pain crisis.9 They received ketamine in addition to opioids. Roughly 80% of patients who received ketamine had an improvement in self-reported pain intensity, and had a significant reduction in their opioid usage. In patients with chronic pain or who take opioids regularly, ketamine may be a viable alternative to sole reliance on opioids for symptom management.9,10

Ketamine has a promising role in an emergency physician's analgesic armamentarium. With a unique mechanism of action, ketamine works synergistically with opioids and shows promise in providing analgesia for patients with both acute and chronic pain. While there is a significant rate of minor emergence phenomena, sub-dissociative ketamine has a broad safety profile with a very low risk of respiratory or hemodynamic compromise. While further studies are needed to further clarify the potential benefits of low dose ketamine, it appears to be a safe and viable option to treat pain in the emergency department.