Case 1. A 72-year-old male with no past medical history presents to the ED with two days of vomiting and severe abdominal pain. Vital signs include a heart rate of 132, blood pressure of 72/35, respiratory rate of 27, and a normal temperature. Volume resuscitation is initiated, and an exam reveals an incarcerated hernia. Bedside ultrasound is preformed, and it reveals several dilated loops of bowel (Image 1) consistent with a small-bowel obstruction. Surgery is consulted, and the patient is taken to the operating room without further delay or imaging studies. 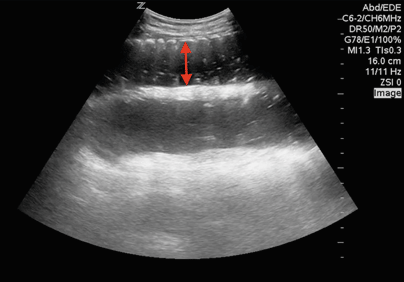 Case 2. A 65-year-old male with a history of a surgically repaired perforated duodenal ulcer presents to a rural emergency department with mild abdominal pain of two days duration. His last bowel movement was one day ago, with good oral intake and no nausea or vomiting. On examination, the patient's abdomen is large but soft, with no guarding or rebound. Bedside ultrasound exam shows multiple loops of small bowel that are fluid-filled and dilated (Images 2-4). Also noted is a trace amount of free fluid in between loops of bowel (Image 3). In this case, CT confirms the suspected diagnosis of bowel obstruction, likely due to adhesions. Image 2. Measurement of the bowel diameter, showing a loop at 3.58 cm. 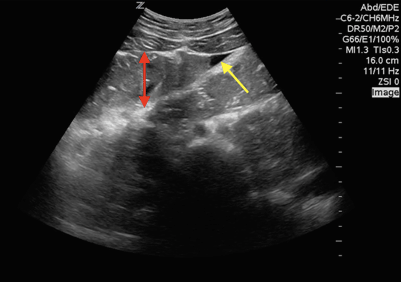 Bowel obstruction is a relatively common clinical entity, accounting for 15% of all emergency department admissions for abdominal pain, which equates to approximately 300,000 patients per year in the United States.1 The current workup includes a plain film X-ray, which can include up to three views, and can be followed by CT imaging if deemed necessary. Abdominal X-rays are fairly rapid and relatively inexpensive, but have very poor specificity and sensitivity, quoted in the literature as being 50-67% and 46-77%, respectively.2 CT imaging is considered the gold standard in imaging modalities, with a sensitivity of 92% and specificity of 93-100%.2,3 When rapid and accurate diagnosis is required, particularly in those who require early operative intervention, point-of-care ultrasound (POCUS) can be a useful imaging modality.

POCUS for bowel obstruction carries a specificity of 90% and sensitivity of 97%, making it far superior to abdominal X-ray.2 Scheible, et al, published the first description of the use of ultrasound for diagnosis of small-bowel obstruction in 1979 in the American Journal of Radiology.5 There are several advantages to using ultrasound over other imaging modalities that include the ability to detect causes of obstruction and the ability to repeat the exam in a manner safe to the patient. POCUS also allows the assessment of physiologic and hemodynamic status of the patient to provide tailored and appropriate care.

To perform this study, the patient should be placed in the supine position and a curvilinear abdominal probe of 5-2 MHz should be used. Begin by scanning one of the paracolic gutters and sweep along the course of the flank on each side. Proceed across the abdomen in a systematic fashion to ensure no area of the abdomen is left unscanned. This method is described as “mowing the lawn” (Figure 1).

If you do encouter bowel loops with air in them, apply gentle pressure to move the air away if possible. Normal bowel will appear as a single, circular, hypoechoic layer, with hyperechoic contents. The normal diameter of large intestine is 4-5 cm, while small bowel is 2-4 cm. The currently accepted ultrasonographic findings consistent with a small-bowel obstruction include a fluid-filled small bowel with an outer diameter >25 mm which is proximal to collapsed small bowel. Other findings that are suggestive of a small-bowel obstruction, though are less documented, include bowel wall thickness >4 mm, prominent and thickened plicae circulares in the jejunum (the keyboard sign), or well-circumscribed fluid collections. These fluid collections are referred to as the “tanga sign” (Image 3) and are often best seen as a triangular shape between loops of small bowel.

When scanning, seven key questions should be answered:5

The movement of the bowel wall is also an important feature. Early bowel obstruction may show increased peristalsis, but as the obstruction progresses, and the development of bowel wall ischemia begins, the bowel may demonstrate reduced, or no, movement. The presence of intraperitoneal free fluid, decreased or absent peristalsis in a previously hyperactive bowel, and bowel wall thickness >4 mm are highly suggestive of potential bowel wall ischemia. The dynamic causes that can lead to this demonstrate the importance of serial exams, and early surgical consultation.

The differentiation between adynamic ileus and obstruction may be difficult. Ideally, the visualization of a distinct transition point is more suggestive of obstruction. Thus, it is critical to try to obtain imaging of a transition point to help guide further management of the patient. Transition points can be identified by looking for areas of dilated loops of bowel and collapsed loops of bowel adjacent to each other. Other findings indicative of ileus are bowel filled with gas, rather than fluid, and a lack of peristalsis. History obtained from your patient is also critical to help differentiate the two entities.

The two cases here demonstrate the advantage of incorporating POCUS for bowel obstruction into your practice, particularly if your practice requires you to send patients to other facilities for further diagnostic imaging or surgical consultation. It can also decrease radiation exposure to patients and be performed at the bedside with better sensitivity and specificity than abdominal X-rays.