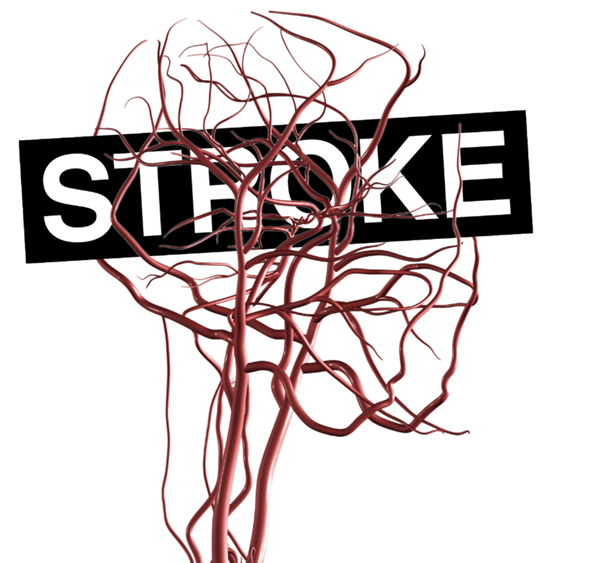 Stroke Alert: Beyond the Non-Con

A 60-year-old female presents to the ED with altered speech and decreased responsiveness that began less than one hour ago. Outside of a resolving hypoxia, all vital signs are stable. She has a noticeable right-sided facial droop, is non-verbal, is unable to follow commands but withdraws from pain, and has an up-going Babinski reflex on the right. A stroke alert is called and a non-contrast computed tomography scan (CT) of her head is obtained. This reveals a dense middle cerebral artery (MCA) sign on the left without any sign of hemorrhage as seen in Image 1. The patient is treated with IV tPA and transferred to a tertiary care center where she undergoes computed tomography angiography (CTA) and CT perfusion scans, followed by endovascular thrombectomy. She is continued on anticoagulation and undergoes rehabilitation, after which her only residual symptom is a slight delay in her right hand when playing the piano.

Acute ischemic stroke is a common life threatening condition seen in the ED every day. In the United States, approximately 795,000 people experience a stroke annually; 87% of these are ischemic.1 After the physical exam, the standard of care is that a non-contrast CT be the next step in diagnosis of a potential stroke. Although its greatest value is in ruling out a hemorrhagic stroke, emergency physicians should be familiar with findings on non-con CT that provide evidence for an ischemic stroke. Additionally, we are on the prepuce of an era in which endovascular therapies could potentially replace current treatment algorithms. In these new testing protocols CTA and CT perfusion scans, in addition to the non-con CT, are the tests of choice for selecting patients that would benefit from interventional therapies.

The ability to interpret non-contrast head CTs in the evaluation of stroke is a necessary skill for all emergency providers. It is an essential test for all potential stroke patients when intervention is time sensitive and can determine patient outcome. Obtaining a non-contrast head CT for all potential stroke patients as early as possible determines our management and is the most cost-effective imaging strategy to improve their survival and quality of life.2 An emergency physician should not limit their reading of a non contrast head CT to only evaluating for presence or absence of hemorrhage. There are several early signs of ischemic stroke that are often present, as seen in Table 1.3,4

A systematic review of 15 studies and 3,468 patients found the prevalence of the signs in Table 1 to be only about 61% (+/-21%), with a mean sensitivity of 66% (range of 20-87%), and mean specificity of 87% (range of 56-100%).3 In this study, the presence of one of these signs elevated the risk of a poor outcome (odds ratio of 3.11); however, there was no association in outcome when IV thrombolysis was given to a patient in whom a sign was present.4 Another study found a similar lack of association between outcome and the presence of these signs in patients receiving IV alteplase (tPA).8 Therefore, despite these signs being associated with poor outcomes, in our current treatment algorithm of IV tPA vs no IV tPA, early CT signs of acute ischemic stroke should not play a significant role in decision making and management. 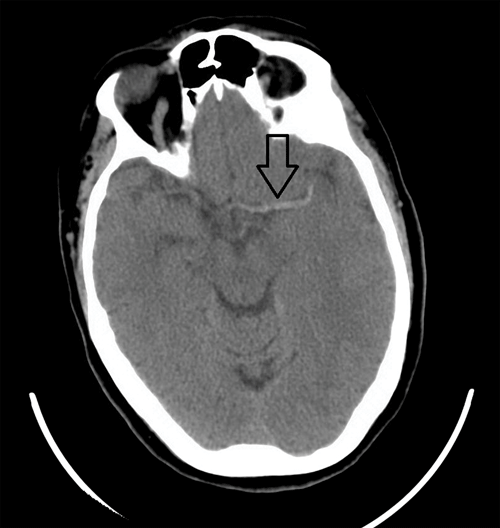 The utility of the hyperdense MCA sign is found when it is used as a representative of a proximal thromboembolic occlusion of the MCA.5 This finding then justifies further studies. Endovascular clot retrieval therapy may play a role; in select patients it has been shown to improve functional outcomes compared to standard therapy with or without IV tPA. Three recent randomized controlled studies (EXTEND-IA, ESCAPE, and SWIFT PRIME trials) demonstrated a benefit to clot retrieval in selected patients.9,10,11 These trials utilized either CTA or CT perfusion scans to select patients with relatively small irreversible infarct territories and a proximal occlusion of the internal carotid or an intracerebral artery (i.e., the MCA). The ESCAPE trial included patients up to 12 hours after symptom onset, providing endovascular clot retrieval long after IV tPA becomes contraindicated (at 3 or 4.5 hours, depending on the patient and existing protocols).10 A hyperdense MCA sign on the non-contrast CT may prompt the emergency provider to consult a stroke specialist and obtain one of these additional scans or further intervention.

At this point, there is no evidence that associates the hyperdense MCA sign or any early sign of ischemic stroke on non-contrast CT with endovascular therapies and improved outcomes. But, as more literature is published on these new therapies, it may be even more important for the emergency provider to correctly identify proximal cerebral artery strokes to hasten endovascular intervention.