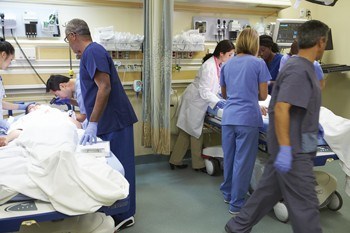 We all experience different things in residency and come away with different perspectives, but there are a few things we all share in training. A constant sense of pressure and the need to “disposition” each patient as quickly as possible seems to be ever looming in our subconscious, if not outright in our thoughts. How quickly can we get that patient out the door, how fast will we make that diagnosis, when is that patient getting admitted? We tend to want to wear efficiency as a badge of pride, and somehow our specialty has fallen into the trap of believing that a faster physician is a better physician.

Before our hospital transitioned to a fully integrated EMR, we used to have a 9"x11" letterbox that would hold the newly-created patient charts for each individual who had made it past triage and into our pod. We would scribble orders on the paper copies; somehow the nursing staff would decipher the illegiblities, and most of the time patient care flowed nicely. If ever there were more than one or two new unclaimed charts in the box, our senior residents would quickly offer a sometimes-grating reminder with a common phrase — “Hit the box!” With the advent of an electronic system and auto-dictating, the ability to speed up patient care has improved, but the same “hit the box” sentiment remains.

While hard work generally breeds a better worker, the idea of “faster is better” may not carry the same sentiment in medicine as it does elsewhere. At least it probably shouldn't. It is so easy to get lost in the flow and rhythm of our environmental cycles that the real focus is easily often overlooked. People quickly turn into “creatinines,” “troponins,” and “x-rays.” Numbers replace feelings, and urgency replaces care. There are times when demands require our interactions be brief, and our decisions be quick. But, more often than not, what patients need is not our brains, but our hearts. Loss of empathy is a phenomenon that occurs around the country as we move from first-year medical students to interns to senior residents, and then to attendings. In a field like ours, the process can accelerate.

Starting in my second year of residency, I began to realize that it was getting easier and easier to pick out the “sick” from the “not sick.” People labeled as the latter were easily pushed aside, and “not sick” started to become more “go away.” The faster they're moved...the more I can can see.

It took a moment of introspection for me to realize that I was more often judging my quality of care by the number of patients I saw at the end of my shift, rather than the amount of difference I made in peoples' lives.

It's true that letting that patient stay a moment longer takes up a bed in the ED. But sometimes letting them sit reveals surprising findings. The patient with gastro suddenly starts to look more like mesenteric ischemia; and by not rushing to see the next potentially sick patient, you found the sick one under your nose. Maybe the reason that patient missed dialysis for the tenth time this month wasn't because he didn't want to go, but because he lacked the social infrastructure or medical understanding to see down-the-road consequences. Maybe its because dialysis fixes medical issues, but what this patient really needs is something more than a dialysis recliner and a mini-TV — someone to pay attention and listen to him. By slowing down and focusing on the patient as a person, we find a human beneath the disease. We may also realize what we so often forget — they're coming to us because they need our help, however great or small that help may seem to us.

I remember back to medical school when we were taught that patients reflect more positively on physicians who enter the room and take time to sit at the bedside. They are perceived as better doctors — humanistic and more knowledgeable. Truth is, patients don't perceive you as a better doctor because you sat down; they perceive you as a better doctor because you are one. Often the time we take with our patients means just as much — and sometimes even more — than the care we deliver. Creating time creates an investment, which pays dividends to both you and the patient.

I recently had a close family member who had a stroke. After some urging, he went to the local community emergency department, where, despite the somewhat disparaging medical circumstances, he had a particularly positive interaction with the emergency physician. As he recounted the story, I realized there were several systems hiccups from the waiting room through the hospital stay that could easily have caused harm, or at least been cause for disgruntlement. But I was impressed that the one thing he took home — more than anything else —was his interaction with the doctor in the ED. The clinical care the doctor provided was very good, but it was the extra time he took with the family that made the experience so very positive. When the ED physician found out I was also an emergency medicine doctor, he even took the time out of what I know was a busy shift to call me and do a “doc-to-doc” — not because he had to, but because he cared. This physician's compassionate attitude positively colored the entire rest of my family member's stay in the hospital. For days afterward, all he could talk about was how great of a job the doctor did. One man who took a little extra time made a huge difference.

It reminded me of something else taught to us in medical school. As physicians, we can — and should — focus strongly on the quality of care that is provided. The average layperson isn't impressed by how efficient or smart you are, but rather how personably you interact and how you treat people. Things as simple as an introduction and starting with a smile make a big difference in patient perception of care. We were taught that personable doctors are less likely to face a lawsuit, sometimes in spite of medical errors that were made. Patients need to know that we care about them. How different it is as a patient to be listened to, and not just told what to do.

We all progress from medical students through to attendings. It's a long road that requires knowledge, vocabulary, repetition, and time; and it's easy to fall into the routine of patterns and rushing from one patient to the next. “Hitting the box” and quick dispositions are required skills, but while all of our time is valuable to us, the most priceless of all is the time we give to our patients.