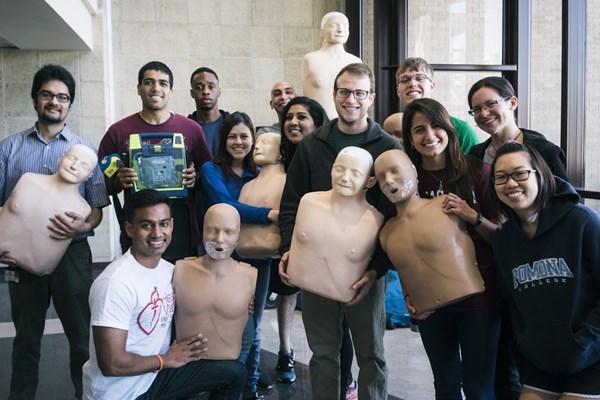 *Editor's note: On Feb. 6, more than 650 medical students in 10 cities throughout Texas united in a bid to break the Guinness World Record for CPR training. Their campaign, Texas Two Step: How to Save a Life, was created by the Texas College of Emergency Physicians, American College of Emergency Physicians, the Texas Medical Association, HealthCorps, and MaveRx. EMRA members Shyam Murali and Nick Douville organized events at Texas A&M Health Science Center College of Medicine; here, Mr. Murali shares his account of this milestone effort.

After a long night of tossing and turning in anticipation of a very busy day, I woke up on the morning of Feb. 6 feeling anything but rested. I had spent the previous day organizing and assembling the last pieces of a massive project, and I couldn't wait to get started. In conjunction with the Texas College of Emergency Physicians Medical Student Council (TCEP MSC), Nick Douville and I had been coordinating a CPR training event to be held on campus as part of a statewide effort to break a Guinness World Record for teaching CPR – while bringing a lifesaving message to as many people as possible.

Because of the time and effort so many of us had poured into this undertaking, the “Texas Two Step: How to Save a Life” campaign wasn't just an attempt to get our names in a record book; it was a chance to have a direct, lasting impact on the community that provides us with a place to live, learn, and grow as medical students.

We set up stations in 2 high-traffic areas at Texas A&M University: Memorial Student Center and Student Recreation Center. Our goal was to convince passers-by to “learn how to save a life” – our line to lure them in. If that bait failed, then we pulled out the big guns: “Would you like to help us set a world record?” That attracted more trainees than the former query, but the end result was the same: Over the course of 10 hours, we educated 281 people about the benefits of two-step, hands-only CPR and how to perform it correctly (Step 1: Call 911; Step 2: Push hard and fast in the center of the chest [with a reminder to get an AED if one is available]). Our pop-up classrooms gave participants the chance to practice their new skills on CPR mannequins. Most had seen CPR executed on TV or in movies, but very few felt they could perform it in an emergency – until after they learned and practiced it with us.

An on-campus swim meet gave us access to hundreds of people from across the state that day. Many of them complimented our initiative and expressed gratitude that we were teaching such an important lesson to the community. One of our volunteers was approached by a man whose father had suffered a myocardial infarction in their house about a year ago. The family was unsure what to do – and his father passed away. With a tear in his eye, he thanked us for promoting such an important message that could potentially help, inspire, and save millions of people.

Statewide Results
The Texas Medical Association reports more than 4,250 people were trained in hands-only CPR during the Texas Two Step campaign on Feb. 6, as medical students coordinated events at 53 sites in 10 cities. While the initiative did not break the Guinness World Record, it did spread lifesaving knowledge to thousands of people.

Shyam Murali and Nick Douville would like to thank the wonderful volunteers who were instrumental in the success of this event, along with the TCEP MSC, Texas A&M Student Recreation Center, Memorial Student Center, College Station ISD, and TAMHSC Simulation Center for all their help. 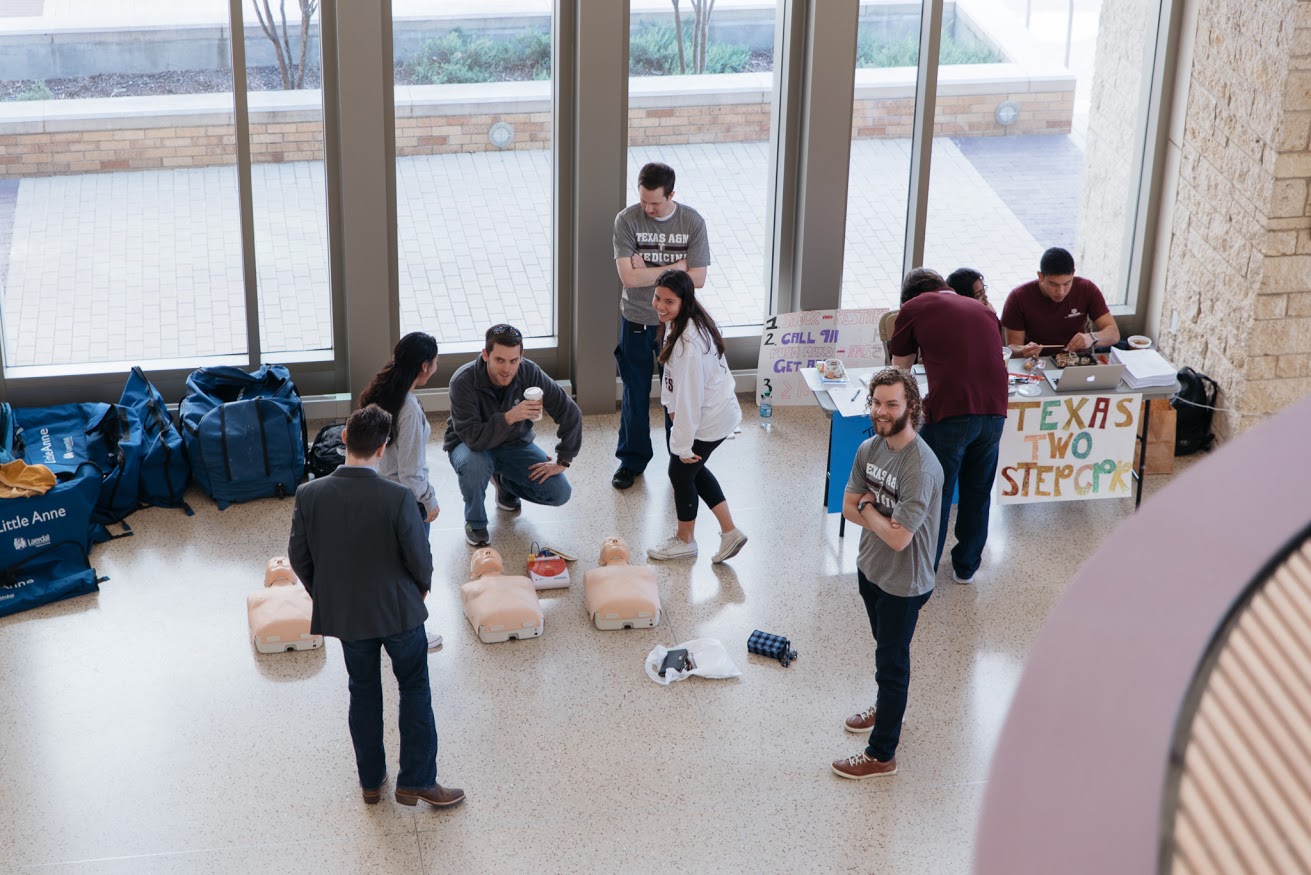 A CPR training station gets underway during the Texas Two Step campaign in February. (Photo by Cody Cobb) 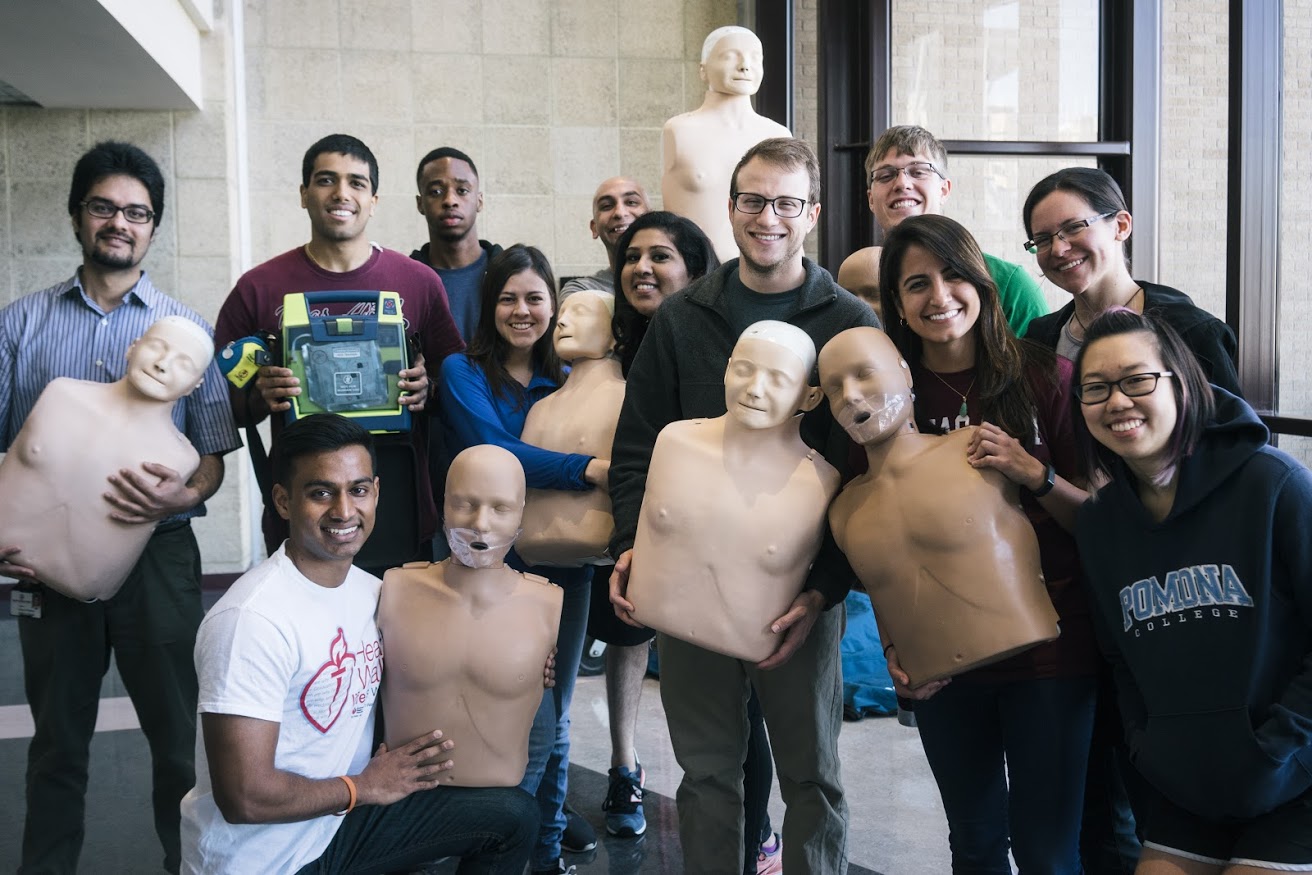 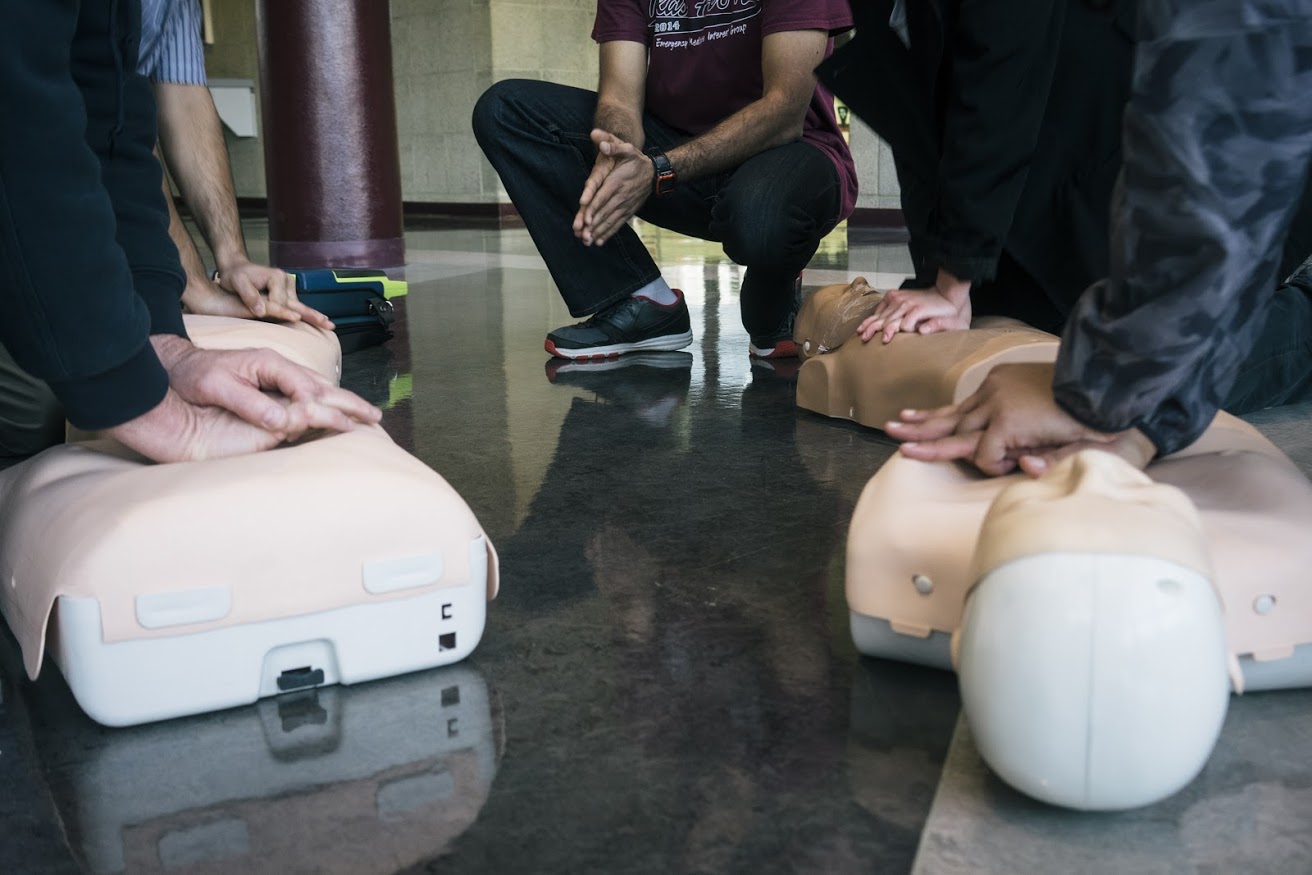 Mannequins, a space to practice, and helpful instruction were the keys to hands-only CPR training. (Photo by Jessica Nguyen) 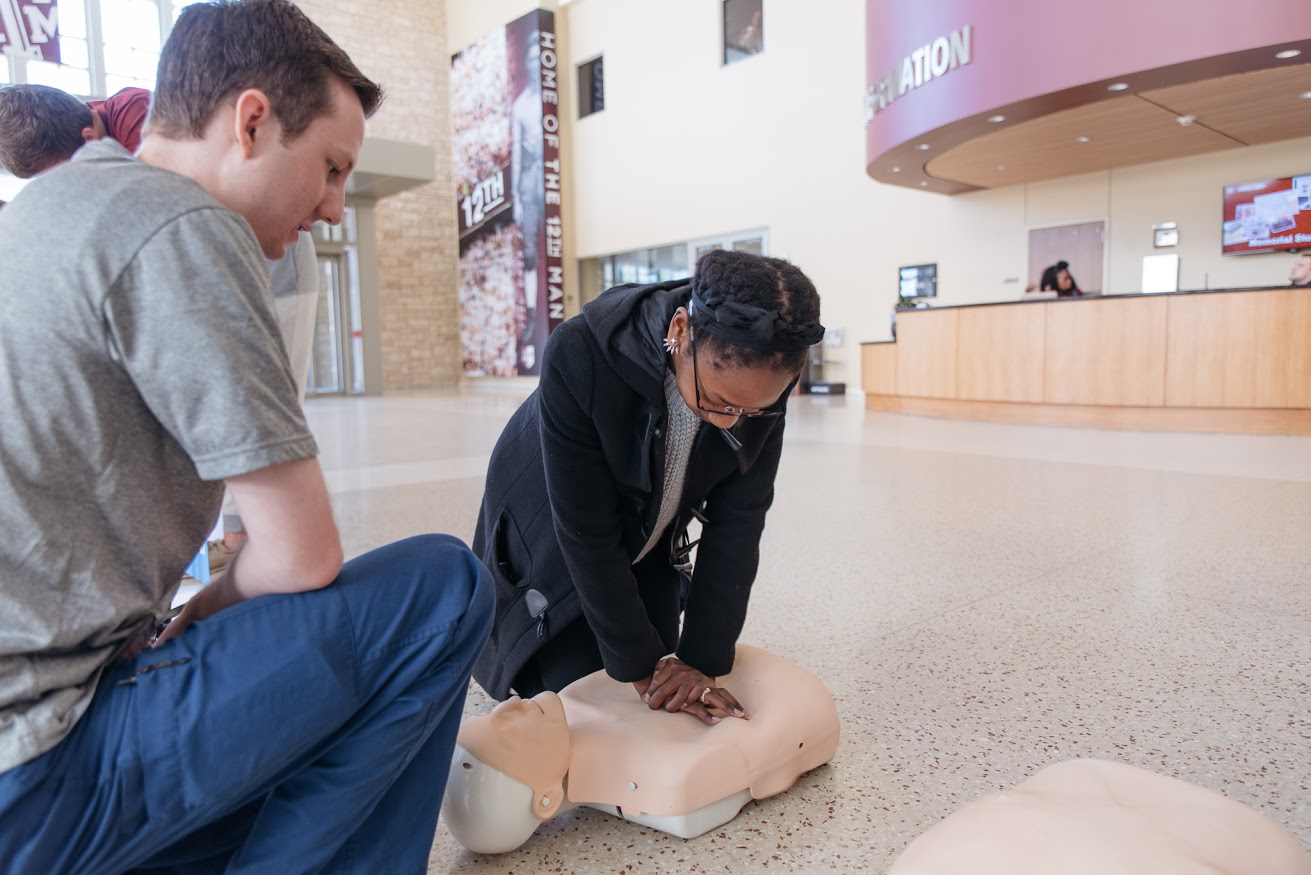 Hands-only CPR training can sometimes be the difference between life and death. (Photo by Cody Cobb)