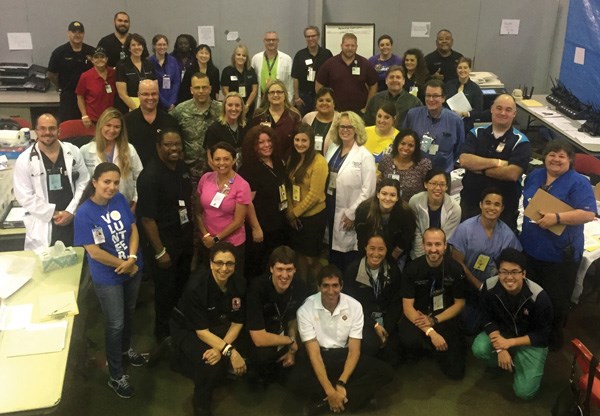 The Best of Humanity: In the Worst of Times

To a medical student, perspective is everything. The way we view our time spent studying in the classroom, the way we process our clinical experiences, and the way we develop our identities as physicians all prepare us for the day when someone will call us their “doctor.” Medical school presents students with a deluge of perspectives, yet time can seem to flow by in a cyclical and monotonous manner. What happens when we are forced to slow time and change our perspectives? What happens when life produces an event that changes everything?

Hurricane Harvey was that inciting event for many people.

When Harvey struck, millions of Texans were affected. Entire communities were devastated, families were displaced, and at least 75 people lost their lives. The cost of the damage is estimated to be $150-$180 billion — making it among the most destructive hurricanes ever in recorded in the United States.

Yet in the midst of this chaos, the true nature of humanity emerged.

Carl Jung believed in a theory called “humanism,” which assumes humans are inherently good beings who sometimes make mistakes. In a world that is currently plagued by disasters, hateful speech, and many other negativities, I am proud that the state of Texas — and its neighbors who swiftly provided aid — showed a true humanistic nature.

Dallas and Houston are known to be rivals in almost every aspect. From sports to schools to styles of driving, these sister cities showcase their “sibling rivalry” with every passing day. But like true siblings, when one is in trouble, the other will stand up in support. Immediately following the evacuations of the communities most affected by Harvey, the City of Dallas created multiple shelters to house, feed, clothe, and care for those who now had nothing. The Dallas “Megashelter” at the Kay Bailey Hutchison Convention Center housed around 2,650 participants at its peak, with thousands more finding refuge in the surrounding areas. Hundreds of volunteers arrived to help care for these evacuees. I was fortunate enough to be a part of this great endeavor.

In conjunction with the medical students at UT Southwestern, Texas A&M College of Medicine students participated in a variety of clinical duties at the Dallas Megashelter. We staffed the medical clinic from 6 am to midnight every day for 19 consecutive days. During this time, students ranging from first-year to fourth-year participated in almost every aspect of the medical clinic, from triaging patients to serving on the command staff. Thousands of patients were successfully treated through the combined efforts of UT Southwestern, Texas A&M, Dallas Fire Department, the Dallas County Medical Society, and many other organizations. When called upon, medical students spanning two large institutions bonded together to work through long hours and stressful conditions with no expectation of return.

Working alongside our mentors, we students experienced the true meaning of being a “healer,” while participating in pre-clinical and clinical duties. Even though there was no expectation of personal benefit, I believe every volunteer took something valuable away from this experience.

Disasters have a way of uniting individuals and bringing out the best in humanity — humanism truly shows its face when it is needed most. It is what inspires individuals to go abroad and perform mission work in communities with which they have no association. It is what inspires our soldiers to provide toys to children in areas where they are deployed and currently fighting an enemy. And humanism is what inspired the people of Dallas to step up when our sister city was struck by tragedy. Regardless of the amount of time logged at the shelter, I hope this event shaped the perspectives of every medical student who participated and allowed each and every one of us to discover our identity as physicians.